Video of the monthly Wikimedia Foundation metrics and activities meeting covering the month of March (April 5, 2012)

The MediaWiki code repository was converted from Subversion to Git (a distributed version control system originally developed by Linus Torvalds and others for the Linux kernel) for the MediaWiki core and for those MediaWiki extensions that are in use on WMF sites. The expected improvements are: A lower barrier for contributing code, avoiding certain technical flaws of Subversion that made life difficult for developers, and getting improvements to users faster. 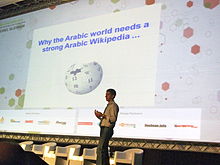 Presentation at Arabnet, explaining “Why the Arabic world needs a strong Arabic Wikipedia….”

At the end of March, Barry Newstead and Moushira Elamrawy from the Wikimedia Foundation’s Global Development department visited several Arabic language countries (Jordan, Morocco, Lebanon and Egypt). They connected with local Wikipedians and various potential partner institutions interested in helping to enhance the Arabic Wikipedia. The Arabic Language Initiative is a strategic priority.

The beta version of the mobile Wikipedia site saw several changes to achieve a more professional look and a better user experience. These include changes to the footer, a cleaner design for revealing and hiding sections, and a redesigned full-screen search. An experimental new feature makes it easier to access reference footnotes.

A detailed report of the Tech Department’s activities for March 2012 can be found at:

Major news in March include:

Approximately 25 active Portuguese editors showed up for the São Paulo convening, making it the biggest convening ever held in Brazil.

(See also the Community section above and the bilingual blog post: “Traveling to Brazil to meet Brazilian Wikipedians“)

Engagement with the community

Positive media stories on the increased focus on Brazil. Media has focused on engagement of Oona with the Wikimedia Foundation. She is trying to refocus attention on the community.

Conversations with Fiocruz [9], IPEA, Steering Committee of Internet, and Ibase.

A relatively quiet month for Communications in March. Jay spoke at the Public Relations World Congress in Dubai on a panel about social media and collaborative approaches to communications. Discussions about some possible expansion and improvements to the Wikimedia blog took place (more plans in development for April) and the Wikimedia Shop got its first major exposure to the Wikimedia community.
The Wikimedia Shop (https://shop.wikimedia.org/ ), under the management of James Alexander, has been getting lots of feedback from community members. New products are in development and work is underway on methods to keep purchase costs and shipping low for international customers. We’re also proposing several methods of shipping free merchandise to global volunteers.

No major press releases or announcements in March

https://diff.wikimedia.org/2012/03/09/transfer-of-wikipedia-sites-from-godaddy-complete/
Users react strongly and favorably to the news that the Wikimedia Foundation transferred its domains from GoDaddy to MarkMonitor.

Payroll accountability is now shared between HR and Finance, with Finance handling execution. We also completed a bi-annual exempt/non-exempt status audit and adjusted employee status where necessary so that we are in legal compliance. We are beginning to implement some leadership development programming, starting with monthly leadership roundtable discussions.
On the recruiting front, we have reduced hiring cycle time from nearly 1 year to 6 months on average, and we have a goal of reducing that to 3 months. Capacity to hire, particularly in tech, has grown enormously. We are improving the visibility of job postings, including on social media outlets, and will be improving our ability to better target specific markets in our recruiting efforts.

We’re working on a revision of both the paid time off policy and our policy on immigrations, namely sponsoring visas and green cards. Part of the intention in the paid time off policy is to address the perception of inequalities in the system by making paid time off based on length of employment. We have also grown to the size where having an immigration policy was necessary, and we are designing one that aligns to our values around welcoming an international workforce.

We moved our domain names from GoDaddy to MarkMonitor. There is a blog post up about it at https://diff.wikimedia.org/2012/03/09/transfer-of-wikipedia-sites-from-godaddy-complete/. We also began implementation of trademark audit – started registering and extending many of our major trademarks and logos that were previously unregistered.
The board approved updated Terms of Use for the sites (which were developed collaboratively with the community), and they will be legally announced by April 15. https://wikimediafoundation.org/wiki/Resolution:Terms_of_use.
We have hired a new temporary paralegal, four summer interns, and hope to hire and announce a new junior counsel (with strong Wikimedia background) in April.
In light of recent Board resolutions on fundraising, we met in Berlin with chapters in France, the UK, and Germany to discuss minimum legal and finance requirements for fundraising; still need to schedule meeting with Switzerland.
In addition, our interns have posted a series of pieces of background research for the community: