Video of the monthly Wikimedia Foundation metrics and activities meeting covering the month of October (November 1, 2012)

82,582 (+4.08% compared with August / +2.98% compared with the previous year)
(Database data, all Wikimedia Foundation projects. Note: We recently refined this metric to take into account Wikimedia Commons and activity across several projects.)

(Financial information is only available for September 2012 at the time of this report.)

All financial information presented is for the Month-To-Date and Year-To-Date September 30, 2012.

The design changes to the Wikipedia mobile site include new navigation and updated typography.

The mobile gateway to Wikipedia was updated with several features that had earlier been tested on the mobile beta site. The new navigation system aims to make mobile features and settings easier to discover. In the coming months, the mobile team will work on adding possibilities to contribute on mobile devices. In the previous month, the Wiki Loves Monuments app had already introduced a mobile photo upload function, as the first such possibility. For readers, the new design offers fonts that make the content easier to read.

The nine members of the new volunteer-run Funds Dissemination Committee (FDC) met for the first time in October, preparing their recommendations about funding requests by 12 organizations (11 Wikimedia chapters and the Foundation) from a pool of more than $10 million of Wikimedia donations. In this new model, the funding requests have to be submitted in public, enabling a community review period that lasted until October 22.

The staff which supports the FDC scored each request according to a criteria list:

The Signpost (the English Wikipedia’s weekly community newspaper) has published an overview of these scores and of the requested sums.

The Board of Trustees will announce its decision about the FDC’s recommendations in December.

Wikipedia Zero, the program offering mobile Internet users access to Wikipedia without data charges, added Saudi Telecom Company (STC) to the list of partners. With STC’s 25 million subscribers in Saudi Arabia, Bahrain and Kuwait, altogether 230 million mobile users in 31 countries have now access to the program, half a year after its worldwide start. A preliminary evaluation of its effect on readership is promising: Wikipedia pageviews from Orange Niger customers grew by 77% and those from Orange Kenya customers grew by 88% in a four-month period including the launch in these countries. In Malaysia, unique visitors to Wikipedia from local operator Digi jumped by 42% after it joined Wikipedia Zero.

A detailed report of the Engineering Department’s activities for October 2012 can be found at:

VisualEditor, the upcoming rich-text interface aiming to make it easier to edit wiki pages, didn’t see many visible changes in October, but was heavily restructured behind the scenes. This “refactoring” made the code more modular, and easier to change and extend, even for developers who are not familiar with the entirety of the VisualEditor’s code.

As for Parsoid, the parsing program that translates plain wikitext into HTML annotated for easy editing, and vice-versa, it was heavily tested in October. The team focused on testing the JavaScript prototype parser on 100,000 randomly-selected articles from the English Wikipedia. They compared the articles’ original wikitext to the one obtained after a “round-trip” (the operation consisting of converting wikitext to annotated HTML, and back to wikitext).

For a little over 75% of these articles, this resulted in exactly the same wikitext, as intended. For another 18%, there were some minor differences without consequence. Finally, just under 7% of articles contained errors that change the produced HTML structure. The team is now focusing on these remaining issues, in preparation for the December release.

Version 5 of Article feedback, a quality assessment tool also aiming to engage readers and encourage them to contribute, is still being tested on 10% of articles on the English Wikipedia. A few additional features and improvements were developed and deployed to the site in October, mostly related to abuse prevention and moderation. After a few final upcoming improvements, this tool is expected to be expanded to all articles on the English Wikipedia by the end of 2012, and to other Wikimedia sites in 2013.

Additional features and improvements were also developed for the Page Curation tool (an interface for experienced contributors to review and improve newly created pages), based on the feedback provided by users. A dashboard of metrics was created to better assess the impact of this tool.

The MicroDesign team (focusing on small design issues) mostly worked behind the scenes in October. They began working on a new tool called “Agora” to make it easier to build and deploy future improvements, and started to improve the templates that are displayed when the “edit” window is opened.

The Editor engagement experiments (E3) team deployed a post-edit confirmation message to 16 Wikipedia sites. They also tested a redesigned account creation page and developed an event logging tool to help measure the success of future experiments. The E3 team is looking to hire new developers to join their ranks.

In October, the Mobile team unveiled a redesign of the mobile site, with particular emphasis on navigation and readability, for example through new typography.

Wikipedia Zero (a collaboration with mobile carriers to enable free mobile access to Wikipedia) expanded to include a new partnership with Saudi Telecom Company (STC), reaching about 25 millions of customers in Saudi Arabia, Kuwait and Bahrain. The Wikipedia Zero program aims to increase readership in countries where the internet is primarily accessed from mobile devices; initial numbers indicate that the initiative is indeed growing Wikipedia readership in Africa and Asia.

The Mobile team also started to decommission the Wiki Loves Monuments mobile application, as the contest ended in October. Last, a native Wikipedia application was released for use with Microsoft’s newest operating systems, Windows 8 and Windows RT.

The Language engineering team, whose work aims to reduce barriers to participation for contributors using languages other than English (especially those using a non-Roman alphabet), continued to improve their Universal language selector, and the interface for translating site-wide notices.

They also developed a JavaScript library (a bundle of code reusable by other developers) offering an interface to enter characters not available on a user’s keyboard, and discussed with the VisualEditor team to ensure proper language support in the upcoming editing interface. Last, they shared their experience in designing (and testing) tools and features for a multilingual audience. 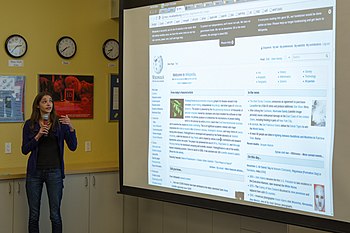 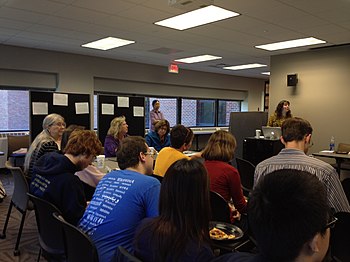 Jami Mathewson at an information session and workshop introducing the Wikimedia Foundation’s Wikipedia Education Program, hosted by Open.Michigan and MLibrary

U.S. professor blogs about her experiences

Alverno College professor Jennifer Geigel Mikulay wrote a post for the Wikimedia Foundation blog about her experiences incorporating Wikipedia into her classroom. She asks her students to write Wikipedia articles about public artworks or create videos posted on Wikimedia Commons to illustrate article content, and the best part is that all of her students are women, so she’s helping to address Wikipedia’s gender gap. Learn more about her experiences by reading her post.

The Wikipedia Education Program in Egypt is kicking off its second term, with courses at the University of Alexandria joining Cairo University and Ain Shams University in participating. More than 20 courses are already on board, with both new and returning professors using Wikipedia in their classrooms this term. At Ain Shams University, courses will be working to translate high quality articles from the English, German, Hebrew, and French Wikipedias onto the Arabic Wikipedia this term. See the full list of courses.

The following grant proposals were funded:

The following requests have been funded: 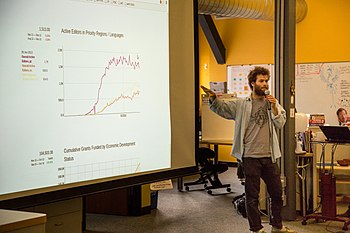 Remaining Open positions to fiscal year end: 46 (8 of which are on hold)

HR ran and facilitated a few key initiatives in the month of October. We did the first segment of a pilot leadership development program for managers, to build leadership ability at the mid-level of the organization that translates strategy into tactics. The overall leadership program is co-designed between Gayle Karen Young and Jennifer Garvey Berger, and will run with 13 managers over a 9-month period, consisting of three 3-day sessions, 3 months apart. Eventually, all leaders in the organization below C-level will go through this program. Jennifer wrote a blog post about her experience with us: http://www.cultivatingleadership.co.nz/leadership/2012/10/leading-wikipedia

HR piloted a recruitment training for hiring managers to improve our recruiting processes and practices. We also supported the design and facilitation of the first WMF board retreat to support better board governance and group dynamics to evolve board functioning, and supported the FDC by doing an “effective group dynamics and decision-making” segment as part of their face-to-face meeting.

October saw communications managing some spillover of the WMUK/COI media relations work from September, but through mid October the media moved on from the topic. The latest Wikipedia editor survey was finalized (and has now launched) and work pushed forward on a community-focussed effort to allow Wikimedians to give each other official branded merchandise in recognition for their hard work. The team has also kicked off work on the 2011-12 WMF Annual Report, which will continue through November. November will see more communications work around the 2012 fundraising drive and further Wikipedia Zero announcements.

The Wikimedia Foundation and Saudi Telecom (STC) partner to provide access to Wikipedia free of mobile data charges in the Middle East (October 14, 2012)

Media coverage of allegations of conflict of interest around the WMUK community continued through early October, but in limited, follow-up stories. As of the middle of the month there have been no further media inquiries.

A group edit-a-thon at the Royal Society, the UK’s national academy of science, aiming to bring more women editors to Wikipedia garnered strong media attention. Held in conjunction with Ada Lovelace Day, the event quickly filled up and improved dozens of articles, including many about women in science.

An Atlantic story in late October prompted speculation that Wikipedia might be nearing completion, an intriguing idea that prompted multiple media outlets, including some mainstream outlets, to repost and reference the story.

Popsci.com | A map of the world, according to Wikipedia geotags (October 2, 2012)

For lots of detailed coverage and news summaries, see the community-edited newsletter “Wikipedia Signpost” for October 2012:

Visitors and guests to the WMF office in October 2012: