A new video player was enabled on Wikipedia and its sister sites, promising to bring free educational videos to more people, on more devices, in more languages. The player is the same HTML5 player used in the Kaltura open-source video platform. Its many new features include advanced support for subtitles, support for the royalty-free WebM video format, and server-side transcoding, i.e. the ability to convert from one video format to another, in order to deliver the appropriate video stream to the user depending on their bandwidth and the size of the player. 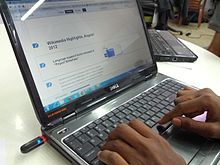 On November 9-11, the Wikimedia Foundation held a developer meetup in Bangalore, India. The Engineering DevCamp focused on language support, development for mobile devices, and user interaction and user experience design (UI/UX). More than 85 developers, UX/UI designers, Wikimedians and translators attended the event. It was preceded by an Open-Source language summit that the Foundation organized together with Red Hat in Pune, India.

The Foundation’s ninth annual online fundraiser officially launched on November 27, 2012 and raised a record breaking $2.3 million in a single day: a 59% increase over our biggest day in 2011. See the Fundraiser Statistics page for a view comparing this year to previous years. Banner design progressed from last year’s “Jimmy appeal” ([1]) to variations on a new “Facts banner” ([2], [3], and [4]) which are more oriented towards informing users about the Wikimedia Foundation.

Due to the very successful start, it was decided to show banners only in the following five English-speaking countries through December 31: US, Canada, UK, Australia, and New Zealand (in addition to the banners for fundraising chapters). The fundraiser will be re-launched in all remaining countries in the spring of 2013, with improved translations.

Wikivoyage, the project to create a free world travel guide which anyone can edit, launched on Wikimedia Foundation servers on November 10, migrating text content and accounts from the old servers run by the Wikivoyage Association. The community is working on the review and transfer of media files, and the site remains in “beta” until this and other cleanup tasks are completed.

79,964 (-2.73% compared with September / +0.59% compared with the previous year)
(Database data, all Wikimedia Foundation projects. Note: We recently refined this metric to take into account Wikimedia Commons and activity across several projects.)

(Financial information is only available for October 2012 at the time of this report.)

All financial information presented is for the Month-To-Date and Year-To-Date October 31, 2012.

Video of the monthly Wikimedia Foundation metrics and activities meeting covering the month of November (December 6, 2012) 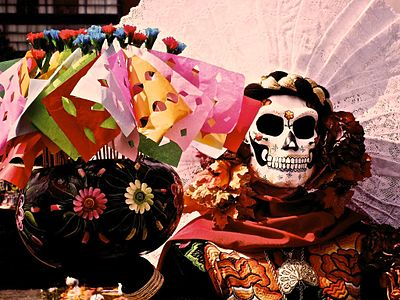 “Day of the Dead” photo contest

Day of the Dead (Día de Muertos) is an annual celebration in Mexico, where people gather to pray for and remember friends and family members who have died. Many aspects of this important holiday lack photographs on Wikimedia Common. The campus library of the ITESM-Campus Ciudad de México sponsored a month-long photography contest called “Day of the Dead, Wiki Style (Día de Muertos estilo Wiki)“. Similar to Wiki Loves Monuments, there was an open submission period lasting one month (from 5 October to 5 November 2012), attracting over 400 photo uploads.

VIAFbot is a bot on the English Wikipedia which links biography articles to the corresponding authority records in the “Virtual International Authority File” (VIAF, which is operated by OCLC, the Online Computer Library Center in the US). Authority records are used in library catalogues to distinguish authors with the same name, and to collect differing names for the same author. In November, VIAFbot completed its run for over 250,000 articles. It examined each page’s title and, if present, existing “persondata” and the infobox to guess the corresponding VIAF ID. The bot also compared the existing “Normdaten” authority record links, which are frequent on the German Wikipedia, and recorded differences between the two Wikipedias.

Signing of the Semanticpedia collaboration

The French Wikimedia chapter signed a partnership with the French Ministry of Culture and Communication and the National Institute for Research in Computer Science and Control (INRIA) launching the Semanticpedia project. The project evolved from the French version of DBpedia and concerns research and development about the extraction of structured (semantic) data from the French language Wikipedia and its sister projects.

A simultaneous editathon from two continents

Wikimedia Mexico and Wikimedia Spain organized the first editing marathon between two Spanish-speaking countries, where Wikipedians collaborated across the ocean on topics that are of importance to both Spain and Mexico.