An alpha version of the VisualEditor, the upcoming rich-text interface which will make it easier to edit wiki pages, was enabled on the English Wikipedia in December. Experienced editors can now test it and provide feedback on problem and priorities.

“The Impact Of Wikipedia” (video produced for the fundraiser, with subtitles in various languages)

Record donations in shortest ever fundraiser

The fundraising team reached their end-of-year goal of US $25 million early this year, making 2012 the shortest fundraiser to date. We also had a record-breaking total number of contributions: 1.484 million donations since July 1. The campaign ended with a “Thank You” banner that introduced readers to a diverse group of editors through written messages and video interviews. About half a million people watched a four-minute video introduction to Wikipedia editors and we saw an increase in account creation.

First round of the new funds dissemination process ends

The Wikimedia Foundation’s Board of Trustees approved the recommendations of the Funds Dissemination Committee (FDC), allocating $8.43 million to 11 Wikimedia organizations. This marked the successful conclusion of the first round of the new FDC process. This change in how money is distributed within the Wikimedia movement was described by Trustees Jan-Bart de Vreede and Patricio Lorente as “a significant devolution of power to the global volunteer community of Wikimedians”. The committee was formed earlier in 2012 and consists of seven volunteers from seven different countries, who have editing experience on several Wikimedia projects, and have founded or have been Board members of five Wikimedia chapters.

79,532 (-0.03% compared with October / +0.59% compared with the previous year)
(Database data, all Wikimedia Foundation projects. Note: We recently refined this metric to take into account Wikimedia Commons and activity across several projects.)

(Financial information is only available for November 2012 at the time of this report.)

All financial information presented is for the Month-To-Date and Year-To-Date November 30, 2012.

Video of the monthly Wikimedia Foundation metrics and activities meeting covering the month of December (January 10, 2013)

One of the images released by the Israeli Government Press Office: King Hussein of Jordan lights the cigarette of Israeli prime minister Yitzhak Rabin shortly after the signing of the 1994 peace treaty.

The government of Israel has announced it will allow the public to freely use images by government officials that are available on government websites. Wikimedia Israel played a major role in the legislative process of almost three years that led to the government’s decision. In the Czech republic, the local Wikimedia chapter managed to convince the country’s senate to release photos of newly elected senators. 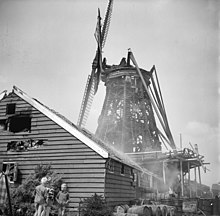 One of the images released by the RCE: Dutch windmill “De Koperslager” after a fire in 1964

The Rijksdienst voor het Cultureel Erfgoed (RCE), a Dutch organization working for the protection of national heritage sites, has released a collection of 555.000 images made by its employees under the CC-BY-SA 3.0 NL license. These are being uploaded to Wikimedia Commons and contain some unique historical photos. In separate news, Commons reached the milestone of 15 million free media files in December.

Around 15 members of the German-language support team (OTRS team) met in Berlin for a two-day workshop. Commonly referred to as the “volunteer response team”, these trusted community members handle a wide range of emails from Wikimedia users and the public, including complaints about Wikipedia articles, inquiries about the Wikimedia projects in general, and statements of permission for images uploaded to Wikimedia Commons. The Berlin workshop was the latest in a series that began in 2008. Topics included legal aspects such as personality rights and copyright, and improving the quality and efficiency of the work on the responses. According to a new statistical report for all languages, 39,729 requests were received in 2012 via the general contact page on the Wikimedia projects, 20,112 of them in English and 7,647 in German. In addition, 13,563 permissions emails were processed.