Wikipedia not so novel after all, except to UK university lecturers; EPOV instead of NPOV

Wikipedia in historic context: “Stigmergic accumulation” is not new

Page with the entry Encyclopédie from Diderot and D’Alembert’s Encyclopédie. The work was the result of the collaboration of more than 100 contributors.

‘Compulsive collection’ refers to the work of compiling encyclopedias that has traditionally been done by a few dedicated, tireless, detail-oriented individuals. Loveland and Reagle point out that, although Wikipedians share this compulsive behavior with past encyclopedists, the crucial distinction lies in the fact that the vast majority were motivated by money (even if this motive existed alongside more idealistic motivations) whereas Wikipedia editors are unpaid.

Loveland and Reagle use the term ‘stigmergic accumulation’ to refer to the process of production by accretion onto a previous text. Even those responsible for a singly authored encyclopedia were relying on predecessors, the authors argue, ‘building on their work and using the cumulative character of texts and knowledge as a ladder of sorts’. Examples of existing texts included the use of a previous edition of an encyclopedia that ran into multiple editions, and the practice of borrowing between different encyclopedias that was sometimes illegal but more often viewed as ‘piratical’ i.e. morally wrong.

The category of ‘corporate production’ is used by Loveland and Reagle to describe the process of encyclopedic editing by a group – groups that topped a thousand contributors in the 20th century. Editors of early encyclopedias like Diderot and D’Alembert’s Encyclopédie in the 1700s faced the challenge of trying to coordinate the contributions of about 140 contributors in a similar way to Wikipedia having to confront issues of consistency that result in debates about how important a subject must be to merit an article. In contrast to other encyclopedias, write Loveland and Reagle, Wikipedia settles these debates through community decision-making and in the open. The authors also note that previous encyclopedias didn’t always recruit on the basis of expertise and that some recognized that it would be cheaper and sometimes more accurate to have non-experts summarizing the works of experts.

The authors conclude by writing that although Wikipedia is in some respects unique in terms of its size, its reliance on volunteers and nonprofit nature, the continuities between Wikipedia and past encyclopedias are ‘numerous and significant’. Their hope is that this paper ‘will help scholars avoid ahistorical claims about Wikipedia, identify historical material germane to the social scientist’s concerns (such as the motivations of encyclopedia-producers), and show that contemporary questions about Wikipedia (such as what exactly should be counted as a contribution) have a lifespan exceeding the past decade.’

The collaboration of the two authors began after Reagle had learned (via a summary in this research report) of a review where Loveland had criticized Reagle’s 2010 book Good Faith Collaboration: The Culture of Wikipedia for having “one major weakness, namely in historical contextualization”. The resulting paper has received media attention starting with an article in The Atlantic, see the February 4 issue of The Signpost.

Work has been ongoing for a while along the lines of recommendation 3: a brochure by the Wikipedia Education Program explains how to assess Wikipedia article quality. A number of similar materials exist on how to use Wikipedia in educational contexts, some also in other languages.

A study titled “Exploring the Cautionary Attitude Toward Wikipedia in Higher Education: Implications for Higher Education Institutions”[2] analyzes the attitudes of five British university lecturers towards Wikipedia, through qualitative analysis. The methodology consisted of 90-minute interviews with the lecturers who declared their familiarity with Web 2.0 educational tools, and analysis of university documentation, primarily in the form of “unofficial policy” regarding the use and evaluation of Wikipedia by students, as no official policy on Wikipedia existed. The author finds that Wikipedia is still treated with suspicion by the educators interviewed, due to 1) a lack of understanding of Wikipedia, 2) a negative attitude toward collaborative knowledge produced outside academia, and 3) the perceived detrimental effects of the use of Web 2.0 applications not included in the university suite. Some factors of particular concern included 1) “the difficulty of knowing if an article is correct,” 2) doubts regarding the quality of information produced by anonymous contributors, 3) doubts about whether the Wikipedia crowdsourcing model of knowledge production can really outperform the experts (reviewer note: but of course…), 4) concerns that Wikipedia makes research “too easy” for students and 5) misunderstanding of Wikipedia’s non-profit nature, with two interviewees suspicious of Wikipedia, expressing concerns such as “this is a commercial business; it wants to make money” and “they are obviously doing it from a business perspective”, and another concerned about “politics and motivation behind [Wikipedia’s dominant position on the Internet]”. All the interviewed teachers hoped that the library staff would be able to provide guidance to students regarding evaluating when to use Wikipedia; however correspondence with the library staff showed that their guidelines are mostly inapplicable to Wikipedia, and they do not address Wikipedia during their literacy teaching sessions. The research also found that all five lecturers use Wikipedia in personal life, and four, in professional research, with two of them commenting that they feel a bit hypocritical using the same tool they warn the students about. None of the interviewed lecturers contributed to Wikipedia, and only one was aware of any outreach from Wikipedia to academics. As the author notes, Wikipedia is still alien to the academic culture, and while the attitudes are shifting, there is still much misunderstanding about Wikipedia’s reliability, quality and non-profit mission. The author concludes that Wikipedia should address those concerns through the following recommendations: 1) “Increase understanding of Wikipedia, its policies and processes.” 2) “Increase understanding of the nature of open and free collaboratively produced knowledge.” and 3) “Make available Wikipedia guidance and evaluation criteria to students and teaching staff.” 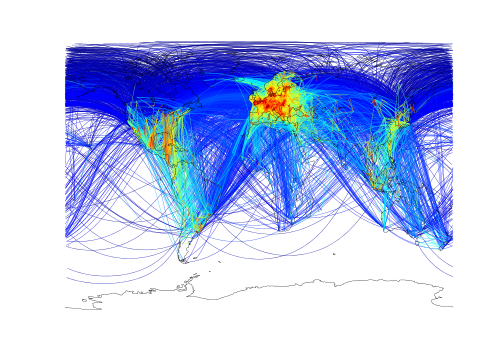 A research team from Barcelona Media Lab has put a preprint in arXiv recently,[3] in which the sistership relation between cities is analyzed. Although the paper has little to say about Wikipedia in itself, the corresponding dataset is extracted from the English Wikipedia, which, according to the paper, hosts “the most extensive but certainly not complete collection of this kind of relationships”. Although this statement could be argued, and no evidence is presented in the article to support that claim, it is striking that mass collaboration of Wikipedians can provide such an interesting package of information on a global scale.

After a description of the data extraction process, the paper presents a set of standard Complex Network analysis, e.g., degree distribution, clustering, average separation of nodes on the network, etc. While there is no surprise among the results of the network analysis, the interesting conclusion is about the effects of the geographical distance of sister cities: “the geographical distance has only a negligible influence when a city selects a sister city.”

In a paper titled “Towards Content Neutrality in Wiki Systems”[4] (an extended version of a conference keynote), a German computer scientist criticizes Wikipedia’s “Neutral Point of View” policy as based on “an objectivist point of view” that is prominent in parts of the natural sciences, but is challenged in the fields of quantum physics, psychology and the social sciences, according to the author. He offers differences between language versions of the Wikipedia articles on Osama Bin Laden and the Mossad as further arguments against the NPOV concept. He admits that “two examples, based on machine translation and subjective classification by an author who wants to prove his point do not show anything”, but claims that even more systematic studies “would suffer the same objection”, proving “that the object under consideration, i.e., a neutral point of view, logically may be considered an ill-defined concept”. However, it is still used on Wikipedia, and even ingrained in its architecture where the “linear version history evokes the illusion that there is one ‘currently best’ version of an article”. To explain why so many Wikipedians do not accept his own logical conclusion, the author offers the psychological diagnosis of cognitive dissonance: “Accepting the illusion of NPOV, one does not have to live with never ending edit-wars on the ultimately right article and one does not have to suffer dissonant feelings in every article”.

Heading back towards his own area of academic expertise, the author then outlines “a variant-augmented Wiki system” to modifying the linear versioning of usual wikis. He bases it on a proposed concept of “content neutrality” requiring “knowledge management platforms” “to store and provide content without any evaluation of its merit”, modeled after network neutrality. He argues that “a collection of every-point-of-view, contradictory, possibly emotionally charged articles may provide a better approximation to reality than a synthetic and illusionary neutral point-of-view” and hopes that such a “content-neutral, EPOV knowledge base [has] a real chance of becoming a truly helpful instrument for science.” Various possible problems with such an architecture are outlined, together with some suggested solutions, but the discussion remains brief and without detail (“The formal design and security analysis of low-level protocols are left to a later paper”). To protect against malicious site operators, the concept is extended to “distributed Wiki hubs”. The paper mentions the existence of “a preliminary implementation as a MediaWiki plug-in prototype” and ongoing work on a use case “which can be described as a Wiki / Blog merge”.

A section on related work cites a few earlier papers discussing distributed wikis or Wikipedia forks (out of many more, see e.g. this reviewer’s “Timeline of distributed Wikipedia proposals“).