What happens when a WikiWoman meets a WikiLibrarian? An editathon on women’s biographies, of course! Or at least this is what happened on May 4th at Biblioteca Salaborsa, one of the most well-known libraries in Bologna, Italy. 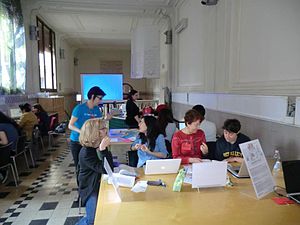 Wikimedia Italia organized its first event at Biblioteca Salaborsa on April 20th, an introductory workshop led by wikipedian Piero Grandesso. Thanks to the work of the librarian and wikimedian Virginia Gentilini, it was possible to renew the collaboration and organize a second event.
We had thirteen participants, some of whom came after attending the first workshop. We created five new articles and improved two existing pages, paying homage in this way to seven amazing Italian women (and also a French one!) who didn’t have the space they deserved on Wikipedia.
It is always a little shocking to discover how many relevant women are missing from Wikipedia. Amongst the pages we created was one about Hortensia, a late Roman Republic orator and one of the very few women who at that time challenged men’s authority by giving a speech in the Forum. She lived during the civil war that took place after Julius Caesar’s assasination, a period when the Roman Republic was struggling with many war expenses. Hortensia debated in the Roman Forum against a tax imposed on wealthy Roman women, arguing that it was not legitimate to demand that women’s properties finance a war in which they had no active role. Eventually the number of women affected by the tax was reduced.
As one can imagine, we study a lot of Ancient Roman history in Italy. Latin literature and language are also compulsory teachings in some secondary schools. But Hortensia’s page, already in other language versions, was not yet on Italian Wikipedia.
Beside the creation of content on Wikipedia, the editathon was also an occasion to put together and share the different skills and competencies of the organizers. The team was composed of Virginia Gentilini, Wikimedia Italia member Ginevra Sanvitale and Commons and Italian Wikipedia sysop Elitre, who worked together, each one according to her area of expertise. We also had a chance to learn and confront a number of related Wikimedia topics.
Finally, the role played by Salaborsa as a center of cultural creation and knowledge circulation was very important.
In 2012, Wikimedia Italia reached out to Italian librarians and libraries for the first time, discovering many possible ways of collaboration. Wikipedia workshops for patrons of libraries are one of these, and they are particularly interesting because of their cultural and social implications. Working on Wikipedia in libraries can bridge the gap between print, traditional resources of information and the lively and active community of Wikipedians. But it can contribute to bridge the Wikipedia Gender Gap too: public libraries in Italy are traditionally used by women more than men, and they can therefore be a perfect place to find women interested in connecting their love of reading to a more participative and empowering way to enrich their cultural life. More women attended the editathon indeed, showing enthusiam and asking for further opportunities to work in this direction.
Librarians in Italy are traditionally mostly women too. It will be interesting to see how many successful ways of collaboration we’ll manage to find, both working directly with patrons inside the libraries, and at a more general level of interaction between bibliographic data held by National Libraries and Wiki Projects. There is such a large amount of useful work to do!
Ginevra Sanvitale, Wikimedia Italia. With the collaboration of Virginia Gentilini