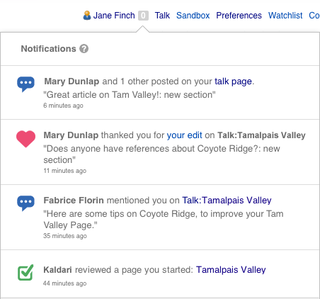 On April 30, the Foundation’s Editor Engagement Team activated the Notifications system (also known as Echo) on the English Wikipedia. It inform editors about new activity on the wiki that affects them, for example when they receive a message on their user page, or when one of their edits is reverted, or when another user thanks them for an edit. The Notifications system is still being tested and modified based on community feedback. Later, it will be made available on other language versions of Wikipedia, and on other Wikimedia projects. 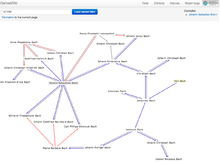 Family tree of the composer Johann Sebastian Bach, generated from Wikidata by the “GeneaWiki” tool

Wikidata’s content can now be used on all Wikipedias

Wikidata has now begun to serve all language versions of Wikipedia as a common source of structured data that can be used any Wikipedia article, e.g. in infoboxes. Wikidata’s machine-readable knowledge database already contains over 11 million items. They can also be queried, evaluated and edited with the help of a growing collection of tools.

The Wikimedia Commons mobile app was officially announced in April, allowing quick and easy image uploads directly from mobile devices. It is available for both iOS and Android devices. Mobile users who don’t have the app installed can still upload images from the mobile web version of all Wikimedia projects.

With an immediate effective date, the Board of Trustees approved Wikimedia guidelines on the disclosure of potential and actual conflicts of interest in requesting and allocating movement resources (such as financial grants). Input provided by the community during a six-week consultation period greatly improved the original version.

517 million (+7.17% compared with February; +5.76% compared with the previous year)
(comScore data for all Wikimedia Foundation projects; comScore will release April data later in May)

(Financial information is only available through March 2013 at the time of this report.)

All financial information presented is for the Month-To-Date and Year-To-Date March 31, 2013.

Video of the monthly Wikimedia Foundation metrics and activities meeting covering the month of April (May 2, 2013)

From April 18 to April 21, the annual conference of Wikimedia chapters took place in Milan, Italy, with more than 100 participants. Chapter representatives were joined by the Board of Trustees, the Funds Dissemination Committee and various employees of the Wikimedia Foundation. Chapters and other movement organizations gave short presentations about their most important activities.

On the preceding weekend, more than 150 people attended GLAM-Wiki 2013 at the British Library in London, an event devoted to the exchange between Wikimedians and cultural institutions (GLAMs). At the end of the month, the first ever GLAM Boot Camp took place at the US National Archives in Washington D.C., a three-day workshop for Wikipedians interested in assisting collaborations with GLAMs.

Logo of the Serbian Wiktionary

On the Serbian Wiktionary, a group of six students of Oriental studies have been working on creating the first online Arabic-Serbian dictionary. The project is symbolically named “1001 words”. It was initiated by Wikimedia Serbia and is supported by a local cultural centre in Belgrade.

“Wiki Loves Sound” is a new initiative to promote the use of sound on Wikimedia projects, supported by Wikimedia Netherlands. In April, 1838 audio files were uploaded to Wikimedia Commons, out of more than 2300 sound recordings donated by the Netherlands Institute For Sound and Vision.