Motivations on the Persian Wikipedia; is science eight times more popular on the Spanish Wikipedia than the English Wikipedia?

Motivations to contribute to the Persian Wikipedia

A chart adapted for use in the Persian article on human evolution.

An article in Library Review titled “Motivating and Discouraging Factors for Wikipedians: the Case Study of Persian Wikipedia”[1] offers a much needed comparison of data from a population of editors outside the English Wikipedia. Most findings related to reasons people start and continue contributing confirm previous studies – important reasons for contributing include the desire to share knowledge and gaining recognition, and are reinforced by friendly interactions.

The authors find that “content production and improvement of Wikipedia in local language” is a significant motivation too, something missing or seen as mostly irrelevant for contributors to the English Wikipedia. The authors also look at reasons for editors to become less active, an area that is not as well understood. Their findings confirm previous research – editors may leave because they find rules too confusing or other editors too unfriendly, or because they do not have enough time. They list some additional reasons not mentioned significantly in the existing literature, such as “issues with Persian script; sociocultural characteristics, e.g. lack of research-based teaching instruction and preference for ready-to-use information; strict rules against mass copying and copyright violation; small size of Persian Web content and a shortage of online Persian references.” The paper suffers from small sample size (interviews with 15 editors) and does not report statistics or rankings for some of the data, making it difficult, for example, to conclude or verify which motivations are more and less important. (Reviewer note: the reviewed pre-print copy did not include figures, which may contain the missing data.)

A conversation in Spanish around an EEG experiment (with English subtitles).

The boundaries between entertainment and science are not always clear-cut.

QRpedia codes are one way to bridge across languages.

This paper[2] poses an interesting question: are there differences between what is popular in different language Wikipedias? This is measured through the comparing the highest-traffic articles in different Wikipedias. The authors chose four: the German, English, Spanish, and French, using open-source software for the analysis ([1]; from the paper and the software page it is unclear whether the software was developed specifically for this project). The researchers obtained 65 most popular articles from six random months of 2009. They then divided the pages into categories: entertainment (ENT), current issues (CUR), politics and war (POL), geography (GEO), information and communication technologies (ICT), science (SCI), arts and humanities (ART), and sexuality (SEX).

Two tables were compiled, the first showing some major differences between the popularity of articles on different Wikipedias. For example entertainment topics form 45% of popular articles on English Wikipedia, but only 16% on Spanish, where in turn the science articles form 24% (compared with only 3% on the English site). The second table compares the most contributed to content, again noting significant differences between different Wikipedias, as well as suggesting a lack of a major relation between a content’s area popularity and number of contributors.

The paper suffers from a number of issues. The authors noted that the division of articles into categories had to be done manually, but the paper does not describe how this was accomplished (this reviewer can’t but wonder: how did the researchers deal with classification of an article that would fit into more than one category, for example); nor is there any appendix that would list the articles in question. Given the rather surprising findings (“most remarkable”), this methodological omission raises issues about the reliability of the research. A number of similar issues plague the paper; for example the tables contain a “MAIN” category that is explained nowhere in the paper. The paper does not discuss any potential biases or issues, such as how the results may not be representative of cultural traits, but of short-term media news coverage; or why the data was limited only to few months in 2009 and how this could have affected our ability to generalize from it. There may be, for example, seasonal patterns of interests in certain topics; for example, one could hypothesize that science topics would receive more visits during the school year than holiday months; and if holiday months are different in sampled countries, this could be a factor in the popularity of science topics. (On a side note, this reviewer would also like to point out that his own paper is cited totally out of context by the authors.)

Overall, such exploratory research is certainly valuable, but the authors stop short of any significant analysis of data, in fact noting themselves that the presented data would benefit from a deeper sociological or sociocultural analysis. Unfortunately, there is no indication that their data set has been made publicly available. Nonetheless, despite lack of significant analysis, and methodological issues, the authors’ findings are quite intriguing, suggesting that there may be a much more significant difference in coverage of topics by different language Wikipedias than most have suspected so far.

Another paper by the same four authors, titled “Visitors and contributors in Wikipedia”[3] examined a sampled pageview log of the top ten language versions of Wikipedia from 2009, discerning article views, views of history pages and edit requests (URLs with “action=edit” or “action=submit”). Among other things, they find that article views and edit requests “are highly correlated throughout the days of the week only for a group of Wikipedias: German, English, Spanish, French, Italian and Russian. This fact can be associated to a more participative attitude on behalf of the users of these editions as it seems that contributions come from the whole mass of visitors. On the contrary, editions where visits and edits are not correlated, or even negatively correlated [the Japanese and Dutch Wikipedias], can be considered as supported by a minority of contributors.” (An earlier paper by some of the same researchers, based on the same 2009 sample, was reviewed in this space in 2011: “Wikipedians’ weekends in international comparison“.)

Breakdown of articles rejected on the English Wikinews by kind of issue and type of contributor. 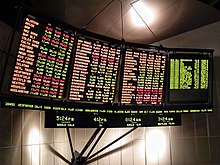 The stockbrokers‘ version of a watchlist.