Video of the monthly Wikimedia Foundation metrics and activities meeting covering the month of June (July 11, 2013)

21.1 billion (+0.7% compared with May; +17.1% compared with the previous year)
(Server log data, all Wikimedia Foundation projects including mobile access)

(Financial information is only available through May 2013 at the time of this report.)

All financial information presented is for the Month-To-Date and Year-To-Date May 31, 2013.

On June 22–23, the first workshop on the design and evaluation of programs (organized activities) in the Wikimedia movement took place. The event was held Budapest, Hungary by the Wikimedia Foundation, in partnership with Wikimedia Magyarország, the local chapter. The workshop brought together 21 program leaders from 15 countries to learn the basic concepts of program evaluation. The success of the workshop itself was evaluated, too: Surveys before and after the workshop showed that a majority of the participants left with a better understanding of these terms and concepts.

One of the tasks made easier by VisualEditor: References can now be edited and added in a format that is more convenient than the <ref> tags in the middle of the page’s source wikitext.

Preparations for the launch of VisualEditor and Universal Language Selector

In June, work was completed on major new features for VisualEditor (the visual interface to edit wiki pages without markup), in preparation for its launch for all logged-in editors on the English Wikipedia on July 1. It is becoming available to most other Wikipedians during the rest of July.

Also in June, the Universal Language Selector began to be deployed to all Wikimedia projects. It allows users to configure language settings like interface language, fonts, and input methods (keyboard mappings) in a flexible way. By July 1, it was available on more than 150 wikis.

Universal Language Selector: A logged-in user is choosing the language which they prefer for the interface menus on the English Wikipedia

In preparation for an update of the Wikimedia Foundation’s privacy policy (the first since 2008), the Legal and Community Advocacy (LCA) team has invited participation in a community discussion period, lasting until July 18. The goal was to get initial input about what privacy concerns community members have, what they find important, and what they would like to see in the next version of the privacy policy. The community was also asked to provide input on practices regarding the Wikimedia trademarks.

A detailed report of the Tech Department’s activities for June 2013 can be found at: 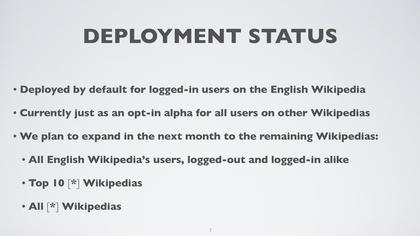 In June, the team completed major new features for VisualEditor (the visual interface to edit wiki pages without markup) in preparation for making it available to most Wikipedia users in July. The editor is now capable of letting users edit the majority of content without needing to use wikitext: it supports text, as well as adding and editing inclusions of references, templates, categories and media items. We organized an A/B test for new user accounts on the English Wikipedia, with half of them getting VisualEditor ahead of the wider release. There were also a number of user interface improvements, and many bugs uncovered by the community were fixed. The team was expanded with four dedicated new members, who will help community members use VisualEditor, and ensure that feedback will be focused and lead to rapid improvements.

VisualEditor relies on Parsoid, the software that converts wikitext to annotated HTML behind the scenes. This month, Parsoid was activated on a new set of servers, and started to track all edits and template / image updates from all Wikipedia sites. The goal was to test Parsoid’s performance in preparation for the activation of VisualEditor on almost all Wikipedia sites. Optimization improvements made earlier (notably using caching) proved effective, as servers seemed to handle the increased load well. Good performance allowed the team to focus on improving the conversion to wikitext, in order to avoid conversion errors and wikitext corruption.

In June, we released more features and bug fixes for Notifications on the English Wikipedia and mediawiki.org. We added a confirmation button for the “Thanks” feature, and added a link to the difference between versions of the page for talk page and interactive notifications. Development of HTML Email notifications, as well as of new metrics dashboards, continued. We ran a week-long A/B test of new user activity, and results show that new users who received Echo notifications made more edits than those who did not, but their edits were reverted slightly more often. Later this Summer, we plan to enable Notifications on more wikis, starting with Meta and the French Wikipedia.

Erik Möller explaining first results about the impact of GettingStarted

This month, we also activated features and fixed bugs for the Article Feedback Tool (AFT5) on the English, French and German Wikipedia. An opt-in feature now allows to enable or disable feedback on a page. The metrics dashboards show how the new moderation tools are being used: for example, about half of moderated feedback is marked as ‘no action needed’, and about a tenth as ‘useful’. The team supported a wider activation of AFT5 on over 40,000 articles on the French Wikipedia; as for the German community, they elected not to adopt the tool. Feature development has now ended for this project, and we plan to make AFT5 available to other wiki projects in the coming weeks.

The Editor Engagement Experiments (E3) team continued work on its experiments related to onboarding new Wikipedians, and launched several new tools to Wikimedia projects. The team began running campaigns to learn about how many editors sign up on the top 10 Wikipedias, and how many sign up via the invitation to “Join Wikipedia” on the login page (see the list of active campaigns and analysis). Another tool, the CoreEvents extension, now logs MediaWiki core activity, like preference updates and page saves across all projects. For the GettingStarted project, the team conducted usability testing of new designs. the E3 team also improved and refined the guided tours extension, including adding usability enhancements like new interface animations, support for community tours, and bug fixing. Work has begun on an experiment to deliver guided tours to all first-time editors. After the VisualEditor launch on the English Wikipedia, we started a micro-survey of newly-registered users to give us a first systematic look at the gender diversity of those creating accounts.

This month, the Mobile team launched a new Wikipedia Zero partnership with Dialog in Sri Lanka. On the technical side, we fixed user interface bugs and enhanced the tool to configure partnerships. We also improved logging and debugging for identification of anomalous access.

We also focused on improving education around mobile uploads, including an interactive Commons tutorial and first-time user copyright and scope check. The “Nearby” feature was activated on the default mobile site, allowing users to find articles near them that are in need of images, take photos and upload them via mobile.

In beta, we started working on an improved navigation for the site and for articles. This includes design tweaks to the left navigation menu, and a new in-article contributory navigation that combines article actions (edit, upload, and watch) with a talk page link. We also experimented with integration of user Notifications, which now work on the English Wikipedia mobile site. We hope make this feature available to all mobile users in July.

We received a $300,000 grant from the Knight Foundation. This is the first installment of a two-year grant we were awarded for winning the Knight News Challenge for Wikipedia Zero.

Fun photo of the WMF Grantmaking Team. Taken in the Hub, San Francisco, during a team retreat to work on planning for FY2013-14 (see below).

No reports were accepted in June 2013.

Draft on project and budget shared for analyses

The primary focus of work for June was annual reviews and annual compensation increases and adjustments for every employee of the Foundation. The other large pieces of work focused on adding index funds to the portfolio of 401k plan options and hosting the annual summer C-level retreat.

Remaining Open Reqs to rollover into the next fiscal year
29

The Legal and Community Advocacy Department has been working extensively with the community regarding a number of topics, including PRISM, trademarks, and privacy. More detail about these ongoing discussions can be found below under “Other Activities“.

Video recording of the “Technology, Law, and Social Change” presentation and panel

Although we issued no major announcements in June, it was still a busy month. We worked on business planning and transition details for the Wikimedia shop, reviewed and implemented designs for revisions to the Wikimedia blog, kicked off some new design projects, and resumed work on an upcoming Wikipedia Zero announcement. In June we also began collaborating with the Wikimania organizing team to coordinate press activities for the upcoming conference.

No major press announcements in June.

The Edward Snowden-led leak of documents relating to the NSA’s PRISM program was a major global news story in June. Wikipedia and the WMF sites received mostly neutral mentions (faring better than other top web properties), particularly following the posting of a notice of community discussion about the topic on the WMF blog.

The Foundation’s legal team announced a victory against former Italian Minister of Defence Cesare Previti in June. Previti accused the Foundation of providing a venue for hosting inaccurate and defamatory statements. The Civil Court of Rome disagreed with Previti’s claim and found in the Foundation’s favor, which resulted in major, largely positive coverage in the Italian mainstream press.

Adding Our Voice to the Wikipedia Chorus | Brooklyn Museum | June 20

When The Last of Us are Left, How Long Would it Take to Transcribe Wikipedia? | Scientific American | June 27

For lots of detailed coverage and news summaries, see the community-edited newsletter “Wikipedia Signpost” for June 2013:

Visitors and guests to the WMF office in June 2013: