Laura Stein, a researcher at the University of Texas at Austin, has concluded[1] that, based on her comparison of user policy documents (including the Terms of Service) of YouTube, Facebook and Wikipedia, Wikipedia offers the highest level of participation power overall. Using Arnstein’s ladder of participation to begin a theoretical discussion on participation and power, Stein carefully proposed a typology of policy and participation (Table 1, p. 359), from the maximal power of “dominant control over site content and governance”, “shared control”, the minimal power of “consultation”, “choice”, and “informing”, to the no power of “deceptive or inadequate information” and “nonparticipation”. She applied this typology across the five policy areas: “permitted content and its use”, “content ownership/copyrights”, “user information/data”, “modifying software” and “user policy formation & consent”) for the three websites, and found that Wikipedia beats other websites in all areas. In the first and last policy areas of “permitted content and its use” and “user policy formation & consent”, Wikipedia gives users the “dominant control” of participation power; for the remaining areas, Wikipedia gives user “shared control over site content and governance”.

In contrast, YouTube and Facebook only provide the minimal power of “informing” in three policy areas: “permitted content and its use”, “content ownership/copyrights”, “modifying software” and provide slightly better minimal power of “choice” for the “user information/data area”. Although Wikipedia is not widely agreed on to be a “social media” website, Stein nevertheless presented a simple typology for evaluating the levels of participation power given to users by platforms. Also, it would be useful to apply this topology in other policy areas including fund dissemination and organizational governance in the near future. 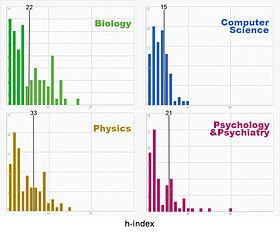 Histogram of h-indexes of scientists from four different disciplines featured in Wikipedia. The solid line shows the average considering all the researchers of the field.

Anna Samoilenko and Taha Yasseri from the Oxford Internet Institute released an arXiv preprint titled: “The distorted mirror of Wikipedia: a quantitative analysis of Wikipedia coverage of academics”.[2] In this study the notability of academics in the English Wikipedia is examined. The ground truth is taken to be the citation records of the scholars under study and the h-index in particular, although the authors admit that the quantity of publications and citations are not the best proxies for evaluating the quality and scientific impact of researchers. Based on the results of the paper, scientists covered in Wikipedia (which are taken from a sample of 400 scientists in 4 different fields of physics, computer science, biology and psychology) do not appear to statistically have a higher impact than the average scientists of their respective field, as long as the citation records are considered. Wikipedia article metrics (such as number of edits to the articles, unique editors, article length, number of wikilinks to the article) are only very weakly correlated with scientometrics such as number of publications, number of citations, citations per publication, h-index, number of co-authors.

In the second part of the article, the researchers investigate the Wikipedia coverage of “Highly Cited Researchers” based on the list published by Thomson Reuters in 2010. In all the four fields under study, the coverage of Wikipedia is well below 50%. This not only indicate that those scientists featured in Wikipedia are no more highly cited than the rest, but many scientists with a high citation-based impact are left out of Wikipedia. Finally, the authors compared the inclusiveness of each of the four categories by size in terms of number of articles; they reported that more populated categories do not necessarily have a better coverage. The authors submit that the growth of Wikipedia alone will not resolve the problem of its incompleteness at least in categories related to scientists bibliographies, and that new policies are required if Wikipedia is to be more balanced in featuring academics.

Panorama of the Pantheon in Rome, with numerous art objects that the algorithm automatically assigns to their description on Wikipedia (see “Reconstructing 3D models of tourist sites annotated with Wikipedia information” above).