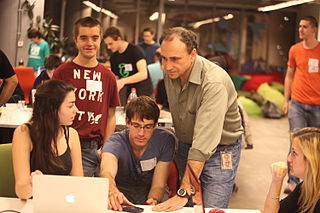 Over sixty volunteer programmers gathered in “Campus Tel Aviv” on December 26 to learn the software behind Wikipedia, fixing its bugs and making nifty tools with it. This was the second event of its kind organized by the Wikimedia Israel chapter, following the success of the first Israeli Hackathon last May. The event was Lead by Wikimedia Israel’s volunteers Oren Bochman and Amir Aharoni.
The people who came were programmers with experience in different software fields: performance tweakers, web server and frontend programmers, mobile developers, semantic web gurus and others fields who wanted to learn something new.
One surprise was the range of ages. A very young group of young robotics hackers from the GreenBlitz group from Hakfar Hayarok youth village who came, all dressed in matching t-shirts. At the end of the day they demoed their work: a gadget that analyzes a photograph and shows the Wikipedia article about the place where it was taken.
Several other teams showed similar projects that used Wikipedia’s API for coordinates and map. Such projects included a Google maps layer that shows locations without a photo in Wikipedia, a gadget that shows Wikipedia articles in an area ranked by popularity and others. 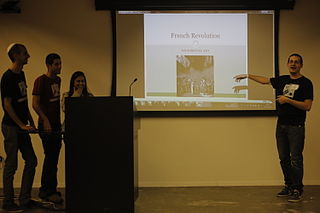 Several people worked on actual bugs in MediaWiki and its extensions. A group of people worked on “reviving” the ParserPhase2 extension, which hasn’t been maintained for a while, but is still useful to them – and may prove to be useful to other MediaWiki users.
Possibly the most impressive demo was done by a group of young IDF hackers, who wrote a Python script to create a PowerPoint presentation directly from a Wikipedia article. In their words, much of their schoolwork consists of building presentations based on Wikipedia content anyway, and they are just making it easier. The auto-generated presentations were complete with slide titles about main topics and sub-topics, explanations of each topic and auto-inserted images. Though possibly controversial, it is nonetheless a nice demonstration of the programmers’ skills, while also being food for thought for teachers on how they can make better use of Wikipedia in the classroom.
We were happy to present Wikimedia’s work to Eugene Kandel, Head of the National Economic Council and Yossi Matias, managing director of Google’s R&D Israel, who visited the Hackathon and heared from WMIL’s volunteers about the work done during the day.
Following another successful developer event, Wikimedia Israel is now working on further outreach to grow the local MediaWiki developers community. We are already planning next year’s event, which will bring about more surprises and useful developments. Also under evaluation is a new program for the scheduling a regular developer meetups aimed at creating a second tier of developer groups focused on MediaWiki hacking in closely knit developer groups.
Chen Davidi, Wikimedia Israel