After a seven-month long community consultation, the Foundation’s legal team concluded work on the new trademark policy. The community discussion, which had more words than The Hitchhiker’s Guide to the Galaxy, resulted in a policy that is unconventional in how it provides liberal use of the Wikimedia marks, while maintaining legal protection. The final policy was approved by the Board of Trustees on February 1, effective immediately.

After one year, Individual Engagement Grants demonstrate potential for impact

Projects from the first round of IEGs

One year after Individual Engagement Grants program was launched in January 2013, the Foundation’s Learning & Evaluation team completed an impact assessment of the projects funded in the first round. One of the projects, The Wikipedia Library, generated $279,000 worth in donations from commercial research database providers, enabling Wikipedia editors to use high quality sources for free. At a grant cost of only $7,500, this represents a 37x return on investment. Another project, on generating publicity in China for Wikipedia, gained 10,000 followers for a new Wikipedia account on social networking site Weibo (25% of whom are women). Applications for the first round of 2014 start in March.

Multimedia vision for 2016, and request for comment on MP4 video

The Foundation’s recently formed Multimedia team presented a multimedia vision for 2016. It is a scenario describing possible new tools for collaborating on multimedia on Commons, Wikipedia and other projects. The team invited community feedback on these ideas.

Separately, the multimedia team started a request for comment (RfC) on whether to support video files in the MP4 format on Wikimedia sites, in addition to the existing software support for the free formats Ogg Theora and WebM. Currently, only about 0.2% of the around 20 million files on Commons are videos, and it is assumed that MP4 support would make uploading and viewing videos much easier for many users, especially on some mobile devices that cannot play videos in the existing free formats. However, MP4 is a proprietary format covered by patents. Most users in the RfC preferred not to support MP4, maintaining the current practice of only using free formats.

A new search infrastructure is being rolled out out to all Wikimedia wikis. It is based on the existing open-source software “Elasticsearch”, instead of the “Lucene-search” software that was written especially for MediaWiki. “Lucene-search” has worked well on Wikimedia sites for around 8 years, but developed some technical problems in 2013. The new search system for MediaWiki is called “CirrusSearch“. Its search results will reflect page updates much quicker than the old system. The text of templates in an article will now be found too, and some new search options were added. CirrusSearch is first becoming available as an optional Beta feature (see the timeline). 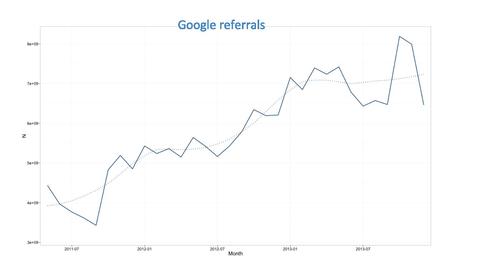 (Financial information is only available through December 2013 at the time of this report.)

All financial information presented is for the Month-To-Date and Year-To-Date December 31, 2013.

Video of the monthly Wikimedia Foundation metrics and activities meeting covering the month of January (February 6, 2014)

The voice of Stephen Fry, recorded for the WikiVIP project

The Wikipedia voice intro project (WikiVIP) invites people who are the subject of a Wikipedia article to record a short sample of their voice, which is then uploaded to Commons. The recording allows a Wikipedia reader to hear who the person sounds like, and how the person’s name is pronounced. Founded by UK Wikipedian Andy Mabbett (User:Pigsonthewing), the project gained the support of celebrity Stephen Fry in January. Andy Mabbett is also collaborating with the BBC to provide extracts from its audio archives for WikiVIP. Volunteers identified over 300 such clips at an event in January, which the BBC will upload to Commons – the first time that the organization releases content from its broadcast archive under a free license.

In January, Wikimedia Ukraine protested against several laws proposed by the country’s government (under the since ousted president Viktor Yanukovych). The chapter was concerned that the bill would make it obligatory for hosting providers and/or domain name registrators to block access to websites without a court order under certain conditions, such as claims of copyright infringement. After the law was passed, the Ukrainian Wikipedia decided to protest by blacking out the site for 30 minutes each day. Also in late January, the Georgian Wikipedia temporarily changed its logo to a version involving the colors of the Ukrainian flag, in support of the Ukrainian Euromaidan protests. (Later in February, Wikimedians worldwide would mourn the death of 22-year old Ukrainian Wikipedian Ihor Kostenko – User:Ig2000 -, who was shot by a sniper at a demonstration during the last days of the protests before the fall of the Yanukovych government.)