This profile is part of a series about Offline Wikipedia 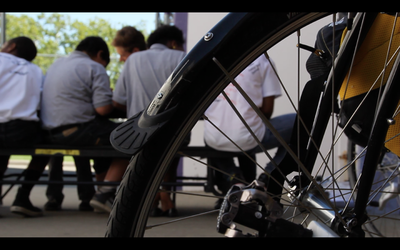 The Spokes team, just before setting off from California.

For most people, a cross-country bike ride sounds like a daunting prospect, but for Ethan Sherbondy, a computer science senior at Massachusetts Institute of Technology, it was a welcomed challenge.
Last summer, he and seven other students, under the moniker of Spokes, set off from California, cycling through Washington D.C. and visiting twelve major cities along the way to teach local kids about science and project-based learning.
“Two summers ago, a friend of mine named Turner proposed this idea of doing a bicycling trip, initially just as a fun thing,” Sherbondy explained. “Then we started thinking, maybe we could use the bike trips as an opportunity to help people, and maybe learn some things about the state of this country that we live in.”
Throughout the trip, the group was often unable to access Wikipedia due to poor signal coverage over remote areas of the United States. “The idea of not having access to Wikipedia actually horrified me,” he said, “because I’m one of those sorts of people that is just constantly reading articles and learning things through Wikipedia.”
Thankfully, the team was armed with Kiwix, an offline version of Wikipedia. With the software, they held “learning festivals” in schools and community centers, teaching local children about engineering and computers.
“Something that consistently surprised me was that there was almost a stigma against science and engineering. Or even if there wasn’t a stigma, there was just kind of this vacuum, like an absence of understanding of what this whole chunk of society does from day-to-day.” 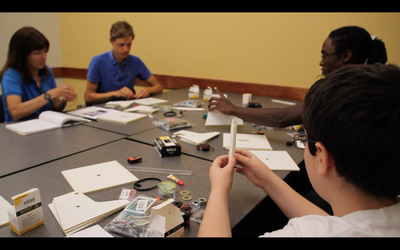 One of the many Spokes workshops. This one is in Loveland, Colorado.

“We would essentially hold giant brainstorming sessions with the kids and get them to come up with projects that they were interested in,” he said, “and then help them make the first steps towards realizing their goals.”
Teaching is something Sherbondy is interested in, which made the trip that much more rewarding for him. “The way that I see teaching is that everyone is a teacher in some capacity,” he said. “At the very least I will throughout my life be making educational resources, even if I’m not a teacher in a conventional way. But I do love teaching and I think it’s a wonderful thing to do.”
Wikipedia is a controversial topic in education, with strong opinions on both sides of the argument. But Sherbondy feels that, despite its flaws, it’s still a great resource for information gathering. “I don’t know if I would call it a teaching tool necessarily. I think of it as a research tool, or as a way of just mapping out the space of possibilities,” he said.
“I think it’s very well maintained and edited. Factual inaccuracies are few and far between, especially for the more technical areas. For the sciences, math and the engineering fields, the articles have been consistently informative, very good summaries, and at least a starting point.”
“It’s the best example that I’ve seen in the whole world of a group of people genuinely trying to make information free,” he added. “Information is how we make decisions. Information is how we learn how to reshape the world. Without information we’re walking blindly into the future. Even 20/80 vision would be okay to walk into the future. But blindly, that’s just scary!”
Joe Sutherland, communications volunteer for the Wikimedia Foundation