One of my photos of Conchita Wurst. A few days ago this photo was selected as a “Quality image“

I like to illustrate Wikipedia articles, and I like to take unique photos. When Swedish singer Loreen won the Eurovision Song Contest 2012 in Baku, Azerbaijan, it meant the Eurovision was coming to Sweden, my own country, and that meant I had the chance to take unique photos. I uploaded about 870 media files to Wikimedia Commons from the Eurovision Song Contest 2013. My plan was to show the Wikipedia community what was possible, and that the following year (this year) people from the new host country would continue the project that I started. Emmelie de Forest from Denmark won in 2013, and the competition moved across the Øresund and is held in Copenhagen this year. So I thought I could continue the project myself.

As I’m writing this, there are Wikipedia articles about the Eurovision Song Contest in 95 languages, and about the Eurovision Song Contest 2014 in 52 languages. Tonight, on 10 May 2014, over 180 million people will be watching the show broadcast live from Copenhagen. People write about it on Wikipedia, and many more read about it. After the winners from a semifinal are announced, the Wikipedia articles are updated in seconds. But there have been almost no photos from any of the competitions.

The sign I brought to Copenhagen, and showed to all the artists.

Compared to last year, I am better prepared this time. I printed a sign with the lines I wanted the artists to say, and I even got it laminated. Also, I arrived in Copenhagen two weeks before the grand final, instead of one week. Last year I didn’t even know that there were a lot of photo opportunities in the first week. I attended the press conferences after the semifinals, and got photos of the twenty artists that qualified from each of the two semifinals, and after that I tried to get video presentations with as many of them as possible. I managed to get twelve of them, and there were a total of 39.

The first days of the first week consists of “Meet & Greets” with all the artists. This year I knew that, and on Monday (April 28) I took photos of the artists in the press conference room, and then I waited in line outside the interview rooms. There are so many reporters who want to do interviews. “Only 5 minutes”. “Only 10 minutes”. When it was finally my turn, I showed the artists my laminated sign, made them present themselves and their song in English, and then in their mother tongue (and in some cases one or two other languages), and then I was done. I got out of the interview room after about 30 seconds, and the other reporters always looked so surprised that I was done so quickly.

After I was done, I rushed back to the press conference room to take photos of the next artist, and then back to the interview rooms. Between some of the meet & greets there were breaks, and after the breaks the host of the next meet & greet would say “I hope you all had a great lunch”. But I never had time for lunch. I had just been standing in line outside the interview rooms. 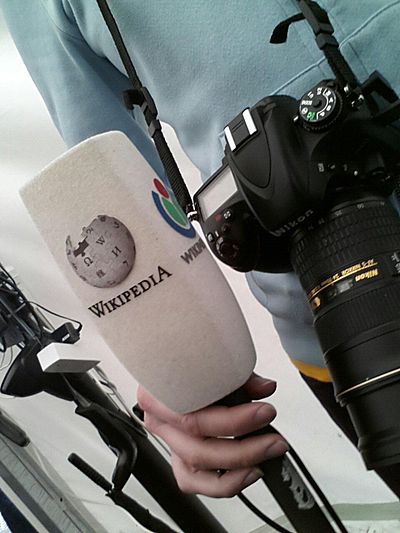 Me holding the Wikipedia microphone from Wikimedia Sveriges technology pool.

On Tuesday, things got better. I learned that I could wave my microphone (with the Wikipedia logo) and show my laminated sign to the “head of press”-people and explain that I only need 30 seconds. I quickly noticed how differently I was treated. There is one head of press for every competing country, and they all have different rules. But it was obvious that almost all of them knew that when people google the artists, they are very likely to end up on Wikipedia. And the Head of press-people want the Wikipedia articles to be as good as possible. Suddenly they let me cut the line, and the other reporters weren’t that annoyed, since I only needed 30 seconds. Some even said “only the biggest newspapers” or some only allowed interviews with reporters from their own country. “And the guy from Wikipedia.” (That’s me). There were even those who said “No interviews. Except for Wikipedia!”

For example, when I was standing in line to interview the wonderful Conchita Wurst from Austria, her head of press said that this day they only did interviews with the biggest newspapers. One reporter was inside the interview room, and while we were waiting the head of press said with a smile on his face, as a joke “So, who of you comes from the biggest newspaper?”. I raised my Wikipedia microphone and said “Seventh largest website in the world!”. That was actually quite popular, and one of the other reporters said “Good point”.

As I’m writing this, the grand final will be over in approximately 24 hours, so I have no idea who will win or where the Eurovision Song Contest will be held next year. All I know is that there are already photos of the winner on Wikimedia Commons, and also a video presentation. I have taken photos of all the artists in the press center, and also on stage. Right now I have uploaded 835 files from this year’s competition, and I have many more to upload.

This year I have also managed to get a video presentation of all of the 37 songs! I actually recorded the last one today. For two weeks I have chased the artists like Pokémons (although I have never played Pokémon) and I finally caught them all. Yesterday I had all but one. Molly from the United Kingdom never had the time for interviews, and today the head of press said that they weren’t giving any interviews, because Molly had to save her voice. But of course he said she could do a short presentation for Wikipedia! 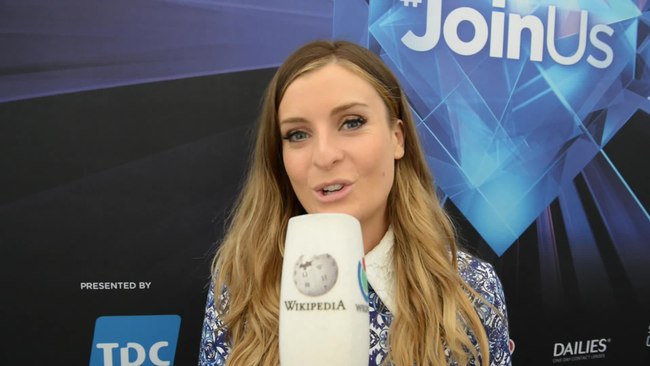 Molly presenting herself and her song in the Eurovision Song Contest 2014.