This profile is part of a series about Offline Wikipedia. 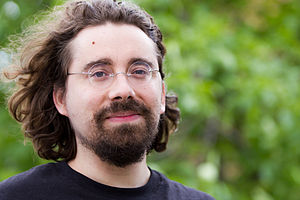 Kiwix running a copy of Wikipedia in German on an OLPC laptop operated by Engelhart in 2012.
“Berlin Hackathon 2012-48” by Victorgrigas, under CC-BY-SA-3.0

Wikipedia’s goal is to be the sum of human knowledge, available to anyone at any time, but when billions of people have no internet access at all, how can that goal be realized? The answer according to software developer Emmanuel Engelhart (User:Kelson) is quite simple – take Wikipedia offline.
Together with Renaud Gaudin, he invented Kiwix, an open source software which allows users to download a copy of Wikipedia in its entirety for offline reading.
Kiwix uses all of Wikipedia’s content through the Parsoid wiki parser to package articles into an open source .zim file that can be read by the special Kiwix browser. Since Kiwix was released in 2007, dozens of languages of Wikipedia have been made available as .zim files, as has other free content, such as Wikisource, Wiktionary and Wikivoyage.
After becoming a Wikipedia editor in 2004, Engelhart became interested in discussions of offline versions of Wikipedia. At the time, Engelhart was in his mid-20s and living in his small village near the town of Vendôme, a few hundred kilometers south of Paris. Learning that a 2003 proposal by Jimmy Wales to create a CD version of Wikipedia, Version 1.0, never made its initial timescale, inspired Engelhart to take action.
He argues that access to information is a basic right that the whole world should be entitled to. “Water is a common good. You understand why you have to care about water. Wikipedia is the same; it’s a common good. We have to care about Wikipedia.”
“Tools are not neutral. They have a big impact on our society and software is [becoming] always more central.” Engelhart says. “We live in an industrial and technical world…so how we make software, what are the rules around software, is really important.”
Engelhart elaborated his reasons for creating the software in an email: “The contents of Wikipedia should be available for everyone! Even without Internet access. This is why I have launched the Kiwix project. Our users are all over the world: sailors on the oceans, poor students thirsty for knowledge, globetrotters almost living in planes, world’s citizens suffering from censorship or free minded prisoners. For all these people, Kiwix provides a simple and practical solution to ponder about the world.”
Profile by Joe Sutherland, Wikimedia Foundation Communications volunteer
Interview by Victor Grigas, Wikimedia Foundation Storyteller
Do you have a story about your use of Offline Wikipedia that you’d like to share? We’d love to hear it! Email: vgrigas(at)wikimedia.org