Our efforts to win support for free content for the Wikiverse

International projects and guests at the GLAM conference “Shaping Access” 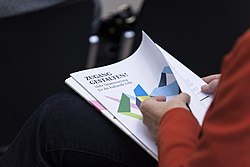 Germany’s largest conference on “cultural and heritage institutions on the Internet” will begin in Berlin tomorrow: “Shaping Access – More Responsibility for Cultural Heritage.” The acronym GLAM – which stands for galleries, libraries, archives and museums – is used internationally to describe activities relating to collaborative work between cultural institutions and online actors. For the fourth time, Wikimedia Deutschland (WMDE) is one of the partners of the GLAM conference “Shaping Access.” More than 350 guests have already signed up for the conference; last year we had approximately 250 attendees over the two days.

For WMDE, the conference represents an important opportunity to present itself to a group of cultural and heritage institutions as a prospective cooperation partner. In the first part of the program we will discuss “Cultural Heritage 3.0 – Digital Reuse.” This will include three keynote speeches from business (Google, William Patry), government (National Library of Norway, Roger Jøsevold) and civil society (Europeana/Wikimedia, Liam Wyatt), plus a panel discussion featuring five prominent representatives from cultural institutions and the previously mentioned areas. We will present the achievements made so far and discuss how the conditions for the reuse of digital content could be improved. Representing science on the panel is Prof. Kurt Fendt, Director of MIT’s Center for Digital Humanities; representing business is Max Kaiser, Project Coordinator of EUROPEANA Creatives; representing the world’s largest non-profit project on the reuse of digital content is Alice Wiegand, member of the Board of Trustees of the Wikimedia Foundation, the body responsible for Wikipedia; and, last but not least, representing GLAM institutions are Dr. Michael Hollmann from the German Federal Archives and Prof. Johannes Vogel, Director of the Museum für Naturkunde (museum for natural sciences) in Berlin. Jan Engelmann, Executive Director of WMDE, will moderate the discussion. Covering nine exciting international projects, the large exhibition at the Museum für Naturkunde (Museum of Natural History) sheds light on the many different aspects of the digital reuse of cultural data and on possible applications in the GLAM sector.

One of the main focal points of the exhibition is the programming competition Coding da Vinci, which we held for the first time this year in cooperation with our partners. We wanted to motivate GLAM institutions to make their digitized collections available to programmers and developers under a free license, so that they can link cultural data together and supplement it with data from Wikipedia or geographical data, and thus develop new ways for using the content in small apps, websites or even hardware devices. The most impressive results will be presented at the conference. The curiosity of GLAM institutions to see how others could reapply “their” data was what prompted them to make it available under a free license. Some 325,000 media files from 16 different cultural institutions give us a great deal of possibilities. Photos, paintings, scanned images of objects such as instruments, devices, insects and plants, plus books, maps and databases – all imaginable kinds of media files are waiting to be reused, for example, as part of Wikipedia projects.

The GLAMour of cultural heritage

About half of the 17 applications presented to the “Coding da Vinci” jury were market-ready by the time the award ceremony was held in July. zzZwitscherwecker (ChirpyClock) is very popular as it takes a playful approach to bringing the calls and pictures of birds to a simple app. Verbrannte-und-verbannte.de, on the other hand, rescues from obscurity the authors who were banned by the Nazis by turning the gloomy Nazi list into an interesting starting point for a journey through knowledge. I personally really like the Alt-Berlin app because it puts museum knowledge at my fingertips. It will become part of my everyday reality, as I can go on a stroll through the city and click on links at my current location to see historical facts about present-day places. As part of the programming competition, the Museum für Naturkunde has decided that all its scanned images of insects (15 million creatures) should be freely accessible for reuse under the CC BY license. The Stadtmuseum Berlin has “released” further material for the Alt-Berlin app. A number of GLAM institutions have already agreed to participate in Coding da Vinci in 2015 with new data sets under a free license. We now need to build upon these successes.

Let’s talk about it

We want to use the opportunity provided by the “Shaping Access” conference to get as many cultural institutions as possible on board for Coding da Vinci. These institutions should also be persuaded to allow content from their collections to be freely reused. Media files under free licenses can then be integrated into Wikipedia articles and within Wikidata. We can also reuse the free digitized historical collections for Wikisource. These are just a few of the possible applications within the Wikiverse. Until now, users can only download the content. We will therefore make it a more pressing matter in the coming year to also closely integrate free content into Wikimedia projects. To do so, we have to build up a technical infrastructure and learn to support developers even more strongly as one of our communities. Developers and programmers should be able to use cultural data as an exciting raw material for their new creative products, in order to enable more people to share in our common cultural heritage and to remain true to the idea of Coding da Vinci – cultural data should not simply be confined to the museum, but also be available on smartphones or tablets in the future. 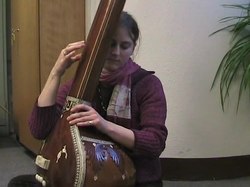 One of the music videos by the Ethnologisches Museum Berlin which can now be reused.
Video by Andreas Richter, under CC-BY-3.0