Open Educational Resources (OER) have become an important theme for Wikimedia Deutschland (WMDE). In September, we organised OERde14, the largest conference on the topic in continental Europe, WMDE’s largest single event in 2014 and a breakthrough for the issue. In this post, I (Sebastian Horndasch of Wikimedia Deutschland’s education and science team) explain what we did and why we did it and how it helped shape the national debate on the issue.

For explaining why we do what on OER, it is important to know that the education landscape in Germany is very different to that in the US and many other countries. OER has only recently entered the political debate in Germany. Up until one or two years ago, the issue inspired the interest of some grassroot activists but not of mainstream political and social groups – at a time, when the United States were already investing millions in the production of open textbooks. So Germany is quite late on OER. This has two main reasons:

But change does happen. Wikipedia showed how open licences and collaborative work can lead to results far superior than proprietary production. Pushed by the European Commission, German lawmakers are starting to discuss the issue. In 2014, the federal state of Berlin was the first German state to adopt an OER strategy.

When I attended Wikimania 2014, I realised how large parts of the Wikimedia community do not view OER as a central issue to be tackled by the movement. At WMDE, we do. The reason for this lies in our basic mission statement. Our full name translates to “Wikimedia Deutschland – association for the promotion of free knowledge”. We believe in the social and moral value of free knowledge. It is our firm belief that in a society where “free” is the default option, there will also be drastically more content in the Wikimedia projects. An open society breeds the framework in which the Wikimedia projects can flourish. So while the main focus of our work is our direct work on the Wikimedia projects, we also work on them indirectly by promoting free knowledge in non-encyclopaedic environments such as culture, science, government data and education. As Open Educational Resources translate the idea of openness to the educational sphere, it made sense for us to make OER an important focus of our work.

There is a lot that an organisation like Wikimedia Deutschland could do on OER. With our limited resources, we decided to do the things where our potential impact could be the largest: Bringing together different stakeholders and developing expertise in order to push free knowledge in education. This resulted in a number of projects and measures:

In 2013, WMDE organised the first German conference on OER in Berlin. The expectation was to attract 150 participants. 270 came. With amazing positive reviews by the visitors, we decided to do another OER conference in September 2014, the OERde14. This time, the conference was supposed to attract even more people and to shift its focus from being mainly a community event to a more political conference.

Most importantly, we needed external funding. Conferences are expensive and we wanted to keep financial barriers (meaning the registration fee) low in order to allow each and everyone interested in the issue to come and participate. At the same time, it was our goal to seek greater influence on government institutions.

It worked: We were able to win The Federal Agency for Civic Education, a large government agency focusing on political education, as the main sponsor of OERde14. This was important not only for financial reasons but also because this sponsorship meant a significant commitment to the importance of OER by a highly influential player in the educational field.

As detailed before, agenda setting was a main goal of the conference. For this reason, we directly invited representatives of all education ministries on state and federal level, as well as members of the federal and state parliaments concerned with education and digitalisation. Many came.

But there was a particular group that we wanted to target. Since January 2014, there has been an ongoing important political process: A working group comprising representatives of state and federal education ministries is drafting political recommendations on OER. The content of this paper might have great influence on OER policies in the years to come. Wikimedia Deutschland is in close contact to group members sympathetic to our cause. We invited the whole working group to the conference and hosted them for a day. This gave us the opportunity to meet with them directly and state our position. The paper of the group is due to be published in December 2014. As one direct result of the meeting, we were approached by the federal ministry of education and science to participate in an OER measure, the details of which are under discussion.

To cater to all interests, we set up a programme with seven different tracks. And we decided to make the conference formats as open as possible: Each day consisted both of a curated part and of a BarCamp – an “open, participatory workshop-events, the content of which is provided by participants” according to Wikipedia.

The outcome in short: Two days, 350 visitors, 38 curated sessions and 31 BarCamp sessions. And a highly positive feedback by the visitors: 98 per cent rated the conference as “good” or “very good” and 93 per cent said that they would “most probably” come again in 2015.

The most important (if indirect) impact: In November 2014, the federal government has committed EUR 2 million on OER in 2015 and another EUR 5 million in 2016 and 2017. This is drastically short of the USD 2 billion that the US government wants to spend on OER[3], but it is a promising start. OER has finally evolved from a grass-root issue to receiving government backing. This is an amazing success for the OER movement and for WMDE.

There are of course further impacts. They are harder to quantify for such a broad measure. We had set a number of indicators for success though:

Have a look yourself

To get an idea on the conference, watch the general conference video. It is mainly in German but it does have some English parts: 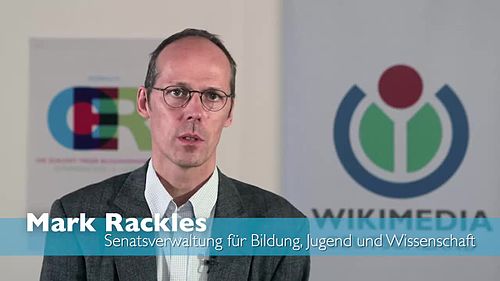 While most speakers were German natives, we had a number of international guests as well. Here’s a selection of talks and interview from the conference in English:

OER will remain an important topic for WMDE. We are planning to increase our work on Bündnis Freie Bildung, the aforementioned pro-OER coalition we founded in 2014. With this, we are also increasing our political advocacy on OER. Beyond that, our planned efforts are dependent on third-party funding and detailed project planning that is currently in the making.

If you are interested in OER in Germany, please contact us! We are happy to discuss our approach, collaborate or just exchange views. Please contact us at bildung@wikimedia.de.