Video of the monthly Wikimedia Foundation metrics and activities meeting covering the month of September (October 2, 2014)

418 million (+1.3% compared with July; -15.8% compared with the previous year)
(comScore data for all Wikimedia Foundation projects, not including mobile devices; comScore will release September data later in October)

(Financial information is only available through August 2014 at the time of this report.)

All financial information presented is for the Month-To-Date and Year-To-Date August 31, 2014.

After several months of preparation by WMF engineers, editors were invited to beta-test Wikimedia servers running on HHVM, the alternative runtime environment for PHP that speeds up MediaWiki. It decreases the loading time for any page viewed while the user is logged in, and for saving pages, whether the user is logged in or not. To make it easier to find bugs in advance of deployment to all servers, edits made via HHVM were tagged with a “HHVM” label in the edit history.

Supported by the Foundation’s Legal Fees Assistance Program, Greek Wikipedia user Diu won a key hearing in a lawsuit brought by Greek politician and academic Theodore Katsanevas. The dispute involves what was written in the first will of the late Andreas Papandreou, former father-in-law of Mr. Katsanevas and former Prime Minister of Greece. The court declared that the content appearing in the Wikipedia article did not differ from the content of the will and that the formulation of the article did not indicate an intent to disparage the reputation or honor of Mr. Katsanevas.

The Foundation’s Grantmaking department participated in a community consultation on the future of Wikimedia work in Brazil, where the Foundation had been funding a one-year project with local partner Ação Educativa since 2013.

At the end of September, Damon Sicore joined the Foundation in the newly created role of Vice President of Engineering, reporting to Executive Director Lila Tretikov. Simultaneously, the Foundation’s technical department was split into separate Product and Engineering departments.

A detailed report of the Tech Department’s activities for September 2014 can be found at:

In September, the Mobile Apps Team released a new version of the iOS app containing the Nearby feature which shows you articles about things that are near your location, and a references panel that pops up whenever you tap a reference. The team also released an iOS 8 compatibility build to market, and spent time performing code quality improvements and refactoring on both the iOS and Android apps.

This month the Mobile Web team focused on the first prototype of WikiGrok, a new contribution feature that asks users who are reading Wikipedia articles to help add Wikidata content that is missing about the article subject. Over the course of the month, we built and user-tested the first experimental interface for allowing users to input Wikidata: a simple binary question mode that provides the user with a suggested occupation on biographies that are missing this information in Wikidata but contain a possible occupation in the Wikipedia article. In this early test phase, we are storing the replies in a separate database, not pushing to Wikidata. We plan to add suggestions for more Wikidata fields and test this version against a slightly more complex tagging interface in beta in October.

In September, the Flow team enabled new test pages on the French and Hebrew Wikipedia. The French test is for the Forum des Nouveaux, a help space for new contributors (similar to the Teahouse on the English Wikipedia). The Forum des Nouveaux hosts reached out to the Flow team after Wikimania, excited to try out the new discussions system. The Hebrew Wikipedia test is helping the team diagnose problems for Right-to-Left languages, and general internationalization issues.

The team also refined the new Echo notifications functionality, with lots of feedback from contributors on mediawiki.org and the English Wikipedia. New topic notifications are now bundled in Echo, and we fixed several bugs related to the behavior of the Alerts and Messages tabs, and getting excess mention notifications.

Improvements and updates were made to a number of interface messages as part of our work with translators to improve the software for all users, based on feedback from users and user testing. We made progress on table structure editing and auto-filled citations, both of which will be coming soon. The deployed version of the code was updated five times in the regular release cycle.

In September, the team wrapped up the feature development for SUL finalisation. The steward end of the rename request form is outstanding and will be finished in October. In October, the team is planning to proceed into deployment and testing of the features.

phabricator.wikimedia.org was set up with tickets imported from the previous Labs instance (public registration will be enabled once all remaining tasks have been sorted out). Restricting access to Phabricator tasks based on project membership was implemented. Inbound email was configured so Phabricator can let you interact with external (non-Phabricator) users via email. Furthermore, we improved the Phabricator documentation and help and showed the very basics of Phabricator in a video. A new Phabricator test instance was also set up at https://phab-01.wmflabs.org/.

We completed the definitions, documentation and requirements for a new set of metrics to be implemented in Vital Signs. We completed a first draft of a page view definition, which is currently being discussed. We supported the mobile team with baseline traffic reports for Apps and Mobile Web.

September saw a lot of activity on the RESTBase storage and API service. A new ‘pagecontent’ composite bucket type using revisioned blob buckets was introduced. This uses the by-now fairly rich table storage backend to provide functionality similar to MediaWiki’s revision table, and supports any number of revisioned types of content (like HTML, wikitext, JSON metadata) associated with each revision. Work on secondary index updates continued at full steam, and is now close to being merged. 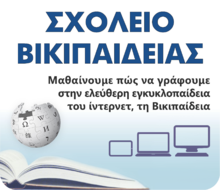 The Wikipedia Education Collaborative welcomed 1 new member. Fernando de la Rosa Morena will represent Uruguay, and will join us in Edinburgh in early November for the Collaborative’s next in-person meeting.

The September issue of the education newsletter, This Month In Education, featured an update about The Wikipedia Education Collaborative along with articles from education programs in Sweden, Czech Republic, Mexico, and Germany. Also included in this issue was media coverage of education initiatives in the Philippines, Argentina, and Brazil. 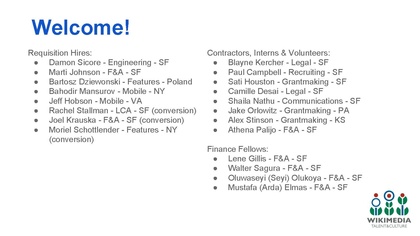 We’ve hired a new Vice President of Engineering! Many thanks to all the staff, especially Erik Moeller, for their efforts in finding us this critical leadership role. Part of that is heavy hiring and onboarding. We finished the second cohort of our WikiLeads leadership development program, and we also conducted two strategy meetings to support the organization in thinking through our process and key issues in preparation for wider engagement. We are also undergoing our first 401k (retirement planning) audit, and also we began the data migration from Jobvite to Greenhouse as our applicant tracking system for jobs, in the hope that it will significantly help us streamline our recruiting process. We also filed our Equal Employment Opportunity (EEO) data with the United States government and publicizing our demographics data shortly.

After an IP from the U.S. Congress was blocked again, proving that vandalism isn’t just the stuff of summer interns, Wikmedia DC invited Congress to edit as long as it abides by policies and guidelines. DC-based media covered the exchanges with glee. A report by the UK’s Oxford Internet Institute on geographic distributions of articles underscored the unequal nature of the encyclopedia’s composition. Wikipedia Zero launched in the Philippines, bringing free Wikipedia to a 70 million person market. Traffic spikes: Wiki Loves Africa and Wiki Loves Monuments kicked off, people dumped buckets of ice over their heads and flocked to the ALS article, and WikiProjectMed translated the ENWP article on Ebola into many of the indigenous African languages of the affected regions. A debate over the fidelity of Neil deGrasse Tyson quotes led to accusations of liberal bias among the community, and Wikipedia’s most prolific editor, Justin Knapp, defended the health of the project. The team launched a weekly editor and reader profile series on the blog and attended the Clinton Global Initiative in support of the Executive Director.

Wikimedia DC reminds Congress anyone can edit, as long as they respect policy

Wikipedia Zero launches in the Philippines

NPR (September 21, 2014) “A Forgotten Referendum On The Union Of Scots And English“

Betabeat (04 September, 2014) “‘Cool Freaks’ Wikipedia Club’ Is the Only Facebook Group You Need“

This month in Congressional vandalism

Blog.wikimedia.org published 22 posts in September 2014. Two posts were multilingual, with translations in Greek and Spanish.

Some highlights from the blog include::

The Communications team said goodbye to Carlos Monterrey, who left us for the sunnier climes of Los Angeles.

We started work with Fundraising and UX on a plan to refresh the Wikimedia shop and merchandise. A design meeting was held where some great new ideas were discussed to develop the identity and purpose of the store and our products. We also gave brand support to Fundraising’s big donor events, where some exciting new gifts are in the works.

From October 2014 on, the Wikimedia Foundation is switching from a monthly to a quarterly reporting schedule, with the first quarterly report (for Q2 FY2014-15, i.e. October to December 2014) scheduled to be published in February 2015.