Women participate in a FemWiki workshop in Kraljevo, to increase gender diversity on the Serbian Wikipedia. These events help them form friendships, share advice and support each other to write more articles about women and gender issues.
Photo by BoyaBoBoya, freely licensed under CC BY-SA 4.0.

FemWiki is a volunteer project started in May 2014 to help increase the number of women who edit Wikipedia in the Serbian language — as well as the quality and quantity of articles about gender issues, feminist terminology and biographies of women.

The idea behind Wikipedia, the largest online encyclopedia, is to collect the sum of human knowledge, in a collaborative way, and to provide access to it for every person in the world. This makes it possible to represent different viewpoints, while preserving the diversity of editors and their experiences.

Unfortunately, global statistics are showing a different picture: a 2010 survey conducted by the United Nations University found that only 13% of Wikipedia contributors identified as female. In Serbia, we have conducted the online survey which showed us that the number of female editors is around 17%; this number suggests that we have fruitful ground to work on for even better results in the future.

The idea for the FemWiki project came to me while I was attending the international Wikimedia Diversity conference in Berlin, in October 2013. During this event, I met a great number of female Wikipedians from different countries. Most were already engaged in their local communities to address the gender gap issue on Wikipedia. Motivated, inspired and excited, I came back to Belgrade with a lot of ideas and an incentive to start this project.

Is Wikipedia a “male” encyclopedia?

Not long after the conference, I got an invitation from the activists of Women INDOK Centre to give a talk about the visibility of women on Wikipedia for a public discussion series called “Gender and the Left”. To that end, I conducted the first mini research of feminist content on Serbian Wikipedia.

The conclusion was very clear: the content that is posted on Wikipedia is predominantly written by men. Therefore, it’s not surprising that articles are not substantiated with gender-sensitive topics, feminist terminology and biographies of women. 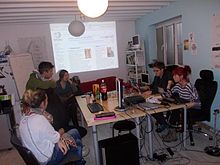 After the “Gender and the Left” discussion, I connected with some other feminist organizations and hosted FemWiki workshops across the country. That’s how we started collaborating with Women Space from Niš, Fenomena from Kraljevo and activists from Kragujevac. Although I was traveling to share my knowledge, every workshop on editing Wikipedia revealed how much unrecognized knowledge women already have. Every workshop brought new experiences and insights about women’s history — which is not valued in a man-dominated culture, and is therefore not visible on Wikipedia. Virtual space seems to be a reflection of the real world.

Wikipedia has become a place where all kinds of knowledge can become more accessible.

After one of the events that we organized in Belgrade, Women from the Internet, we saw a need for more consistent workshops. To that end, I started scheduling FemWiki meetings on Friday afternoons, at Hacklab Belgrade, a local hackerspace; I have actively used this space for the past few years.

On several occasions, we experienced negative attitudes from some male members, who thought these kind of events actually discriminate towards men. However, the Hacklab community, even though it is predominantly composed of men, recognized the need for women to be more motivated when working with technology, computers and Wikipedia. So, our women-only workshop was accepted as a regular part of their schedule.

During that time, the workshops became a lot more than just about editing Wikipedia: we are forming friendships, giving advice, encouraging each other and sharing knowledge. Also, Wikimedia Serbia has now gained five new female members, who are interested in more activities within the organization. 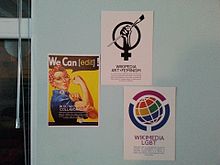 During October and November 2014, Wikimedia Serbia organized a contest to write Wikipedia articles on women’s issues. As the coordinator of the contest, I asked three women to be members of the jury, which had never happened before — causing discriminatory and sexist comments on the talk page.

By the end of the contest, we had collectively written 246 new articles! Two out of three participants rewarded in the contest were women — and one of them decided to mark all her articles with the FemWiki template, as her way of contributing.

During the contest, I received emails from ten women who had never edited Wikipedia, but who were attracted by the contest. While some of them gave up, others successfully wrote Wikipedia articles — and several of them expressed interest in joining the FemWiki project.

All of this confirmed that women have the interest and motivation to edit Wikipedia, when they don’t feel alone.

This year, we reached out to the authors of the Dictionary of Gender Equality (2010), Vesna Jaric and Nadezda Radovic. They gave us permission to put all the contents of their dictionary on Wikipedia, which will increase the number of articles by 102! (Although some of these articles were already written, they will also be edited and supplemented with content from the dictionary).

This is one of the big steps we made during 2014, not only because of the free content, but also because we have succeed in expanding the FemWiki project beyond the workshops. The battle for better visibility of women topics on Wikipedia is now being fought on several fronts.

In 2014 we started, edited or fixed 80 articles (~30 of them were written during the contest, and now have a FemWiki template).

We also participated in two public events, where we presented the topic of women on Wikipedia: the Gender and the Left discussions; and BeFem, a festival on feminist culture and activism. And the FemWiki project was presented at Women Rock IT, a regional conference held in Sarajevo in December 2014.

In our Belgrade hackerspace, we have held regular Friday afternoon meetings since September, which is used for women-only gatherings and talks about Wikipedia, open knowledge and women’s topics. On the last Friday of 2014, we hosted the first mixed workshop (men and women), during which we wrote four articles together. Also, in the same space, we organized the Women and Technology event, where we presented biographies of women from Wikipedia who made important contributions in the STEM field.

Besides meetings in Belgrade, we have hosted workshops in Niš, Kraljevo and Kragujevac — and we got in touch with more organizations to cooperate with in the future. We also visited Tirana and participated in the Wikipedia weekend event, where we presented the FemWiki project and talked about the gender gap on Wikipedia and the importance of women-only events. In October, we attended Ada Camp in Berlin, where we had the opportunity to seek advice and inspiration from other women who are engaged in the topic of women, Wikipedia and open culture and technology.

As mentioned before, the FemWiki project was launched in May 2014. Before that, the project wasn’t part of annual plans or expected projects of Wikimedia Serbia (WMRS). It started spontaneously when a mix of different things happened, creating a fruitful ground for the project to start.

For the whole year, our expectations were focused on educating feminist activists within countries where Wikipedia is fighting against the gender gap. We didn’t expect a lot of new contributors to stay on Wikipedia, but we wanted to spread the word about the gender gap, about the importance of activities surrounding it, and, within the feminist community in Serbia, about Wikipedia itself.

Today, we can say that this goal was reached: FemWiki is now widely recognized among feminists as the project which deals with the issue of women on the Serbian Wikipedia. Our FemWiki page on Facebook now has 293 likes, and our recent blog post about activities in 2014 was shared more than 10 times (from my personal profile and from the project’s page). The majority of shares were done by feminist organizations which support our efforts. After familiarizing feminists with Wikipedia and educating them, our new focus for 2015 will be organizing edit-a-thons and doing workshops with high school students. In that way we will be more oriented towards editor retention and increasing the quantity of written articles.

What we’ve learned during the workshops is that it is important to announce the theme of every gathering in advance (e.g.: Women and Science, Women and Art, etc.) — and to motivate women to prepare documentation for their chosen articles before the workshop begins. In that way, we are not spending our meeting time researching a topic online or just translating English Wikipedia. And the content that our participants have prepared is evaluated more carefully, with discussions of why it is good or bad and Wikipedia editing guidelines (e.g. licenses, neutral point of view, etc).

In 2015, FemWiki will expand to include lesbian, gay, bisexual, and transgender topics ( LGBT). With this expansion, we want to make Wikipedia more relevant and more accessible to all discriminated groups in society. We are fighting for the recognition of all communities that are not already visible or valued enough in the public space and on Wikipedia.

Besides the usual FemWiki workshops, we will be organizing a few thematic edit-a-thons (International Women’s Day, Women in Art, Women in Science and Technology, LGBTQ edit-a-thon during Pride Week, etc.). We will also organize workshops for high-school girls on editing Wikipedia.

At the start of the spring, we will organize the first regional WikiWomen Camp, together with female Wikipedians from the regions of Albania and Kosovo! More details about that will be coming soon.