Over 75 Art+Feminism Edit-a-thons were hosted worldwide on International Women’s Day, to increase gender diversity on Wikipedia. To learn more, watch this video from the main event at the Museum of Modern Art in New York City: it can also be viewed on YouTube, and Vimeo. (Versions with burned-in English captions can also be found on Wikimedia Commons, YouTube, and Vimeo.) Video by Victor Grigas, freely licensed under CC BY-SA 3.0

The Art+Feminism Campaign organized a global drive to host edit-a-thons on the weekend of International Women’s Day, to improve Wikipedia articles about women in the arts, feminism, and gender — as well as to raise awareness of the Wikipedia gender gap. Over 75 events took place around the world, bringing together about 1,500 participants — ranging from small gatherings of friends to large groups at significant cultural institutions like LACMA, the Walker Art Center, and the Stedelijk Museum. As a result, at least 400 new articles were created, and another 500 articles were significantly improved.

The New York event at the Museum of Modern Art was the central node. This event was organized by Siân Evans and Jacqueline Mabey, Michael Mandiberg, and Dorothy Howard, in collaboration with POWarts and the Museum of Modern Art, and made possible by team of dedicated volunteers. Approximately 200 participants came through MoMA, including librarians, academics, curators, artists, art lovers, feminists, male allies, and experienced Wikipedians. Trainings were held throughout the day, in multiple locations across three floors of the Department of Education. New and experienced editors worked in a variety spaces: the mezzanine level, two classrooms, the Time Warner theatre, multiple lounges, and the library. The day was marked by a spirit of collaboration, with spontaneous volunteering and enthusiastic team editing. 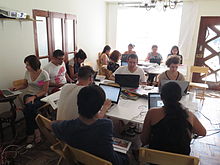 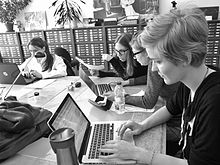 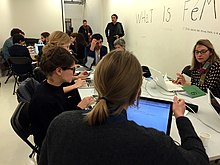 Edit-a-thon in Toronto, Canada.
Photo by Art Gallery of Ontario, CC BY 4.0

A lot of behind-the-scenes work went into catalyzing and coordinating over 75 events and effectively organizing this community. This work was made possible in part by a Project and Event Grant (PEG) and an Individual Engagement Grant (IEG) from the Wikimedia Foundation to build out infrastructure, including a website, and design training materials.

The project reached out extensively to librarians and scholars — primarily off-wiki and through social media — in order to harness their unique skills and build a network of advocates. As our project grows, we hope to empower the many local organizers to take leadership in hosting Art+Feminism events on their own, leveraging the training materials and other resources we have developed.

The Art + Feminism Edit-a-thons engaged 1,500 participants to collaborate actively in this global effort to increase gender diversity on Wikimedia sites. This gave them a unique opportunity to join forces with other women to take direct action in support of this cause. As one of the participants put it: “Sometimes we think that someone else is going to do it, but if we wait until that person does it, it’s going to be very slow. So we have to sometimes take things in[to] our own hands and just do it.”

To learn more about what each site accomplished, visit the the Art+Feminism Outcomes page.

We think that our approach of organizing online but off-wiki though personal and professional networks and social media has been one of the keys to our success. It only makes sense; if you want to bring in new editors, you have to seek them out where they are. If you’re concerned about the gender gap, then offering some form of childcare is important. And having refreshments and multiple editing spaces was crucial to creating a spirit of welcoming and enthusiastic collaboration.

As organizers, we have no desire to rest on our laurels, but seek to continually improve. We actively seek feedback from our fellow organizers and going forward, we will submit our materials for a diversity review. It is impossible to be all things to all people, but we want to be accessible to as many as is feasible, the best jumping off point for groups to remix the processes and materials we’ve developed to suit the needs of their community.

The Art+Feminism project firmly supports a re-evaluation of the notability guidelines on Wikipedia. How do we address the fact that women’s accomplishments generally receive less coverage and may have less notable references to cite? We have an amazing opportunity to reverse that trend on Wikipedia. The Art+Feminism project seeks to ensure we don’t reproduce the same structural biases of past encyclopedic projects.

The Art+Feminism project is also interested in rethinking what makes the ideal Wikipedia; we wish to spark conversations about Wikipedia Editing and Digital Labor, in the context of leisure inequality and gender imbalance in the time people have to contribute to knowledge production and online communities. It’s neither realistic nor sustainable to seek to make every editor a heavy editor, someone whose volunteer labor becomes a part-time or full-time job. Encouraging casual editors can more effectively address content gaps and create a more accurate encyclopedia.

The Art+Feminism edit-a-thon series itself was the result of a collaboration between a number of artists, scholars, curators, librarians and Wikipedians. Specifically, it arose out of two separate conversations between the co-organizers. Siân Evans and Jacqueline Mabey had discussed trying to organize an event around art and feminism — similar to the edit-a-thons geared towards Science, Technology, Engineering and Math (STEM) that take place every year on Ada Lovelace Day. Evans’ goal was to engage ARLiS NA’s Women and Art Special Interest group to build public knowledge and address gender disparities in art research. Mabey mentioned this to Michael Mandiberg, a professor at CUNY Staten Island and the Graduate Center, because of his use of Wikipedia in teaching. Mandiberg had actually had a similar conversation earlier that day with curator Laurel Ptak. At the time, Ptak was a fellow at Eyebeam, a center for art and technology, where she was doing work around cyberfeminism, and he had encouraged her to hold an edit-a-thon focused on art, technology, and feminism. Evans, Mabey, Mandiberg, and Ptak’s specific knowledge of and connections within the arts and library communities were instrumental in building out the project.

After an initial meeting in the fall of 2013, we decided to hold an edit-a-thon and started the organizing process by getting a few local Wikipedia ambassadors involved. We initiated our outreach and organization off-wiki, and quickly extablished a network of nodes, which began planning events. Richard Knipel, of Wikimedia NYC connected node events with Wikipedians, and Dorothy Howard, Wikipedian in Residence at METRO conducted the trainings in NYC. At the Art+Feminism edit-a-thons in 2014, we had around 600 participants in 31 locations and created 101 new articles, and improved 90.