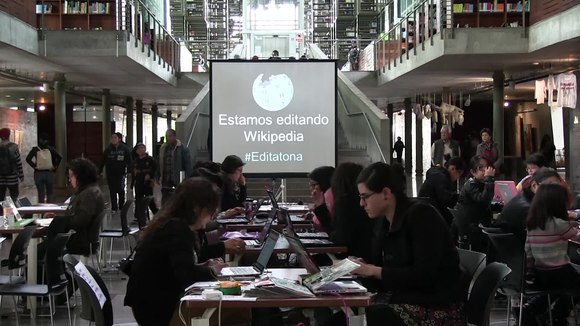 Editatonas are edit-a-thons for women, hosted by Wikimedia Mexico to increase gender diversity on the Spanish Wikipedia. To learn more, watch this video from the second Editatona at Biblioteca Vasconcelos in Mexico City. The video can also be viewed YouTube. Video by Ivan Martínez, freely licensed under CC BY-SA 3.0.

Wikimedia Mexico has started a new program called the Editatona (our feminine word for ‘Editathon’ in Spanish): this editing marathon for women aims to increase gender diversity on the Spanish Wikipedia. We have already hosted two Editatonas this year — and plan two more in 2015, with a focus on Latin America and Spanish-speaking Wikimedia organizations.

Our first Editatona took place on January 31, 2015, bringing together 36 women participants who came in-person — and five more who joined online; this Editatona was held in the Instituto de Liderazgo Simone de Beauvoir, an institution devoted to women, gender gap investigations and empowerment workshops. The second Editatona took place on March 14, 2015, gathering 25 women in-person and three more online participants; it was held in Mexico City’s Biblioteca Vasconcelos, the venue for Wikimania 2015 this summer.

After observing the low participation of women on Wikipedia and the types of content generated on this topic, we concluded that it would be important to cover three areas: Mexican Women, Feminism and Femicide in Mexico — and then add one additional focus on International Women. We also joined the international Iberocoop contest about Women in Wikipedia, which is now organized by several countries with Wikimedia organizations.

Since October 2014, one of our goals has been to increase the participation of women in Spanish Wikipedia, through events we organize throughout Mexico. To that end, we decided to collaborate with nonprofit organizations that are dedicated to working with women.
We found support from a range of partners: Ímpetu A.C., Luchadoras TV, Mujeres Construyendo, La Sandía Digital and SocialTIC, groups which also work with technology and host gender gap activities.

The two Editatonas engaged 61 women in person and 7 online — from different countries, such as Argentina, India and Mexico. As some attendants pointed out, having a safe space to learn about Wikipedia was a very important factor to encourage more participation by women in Wikipedia.

Here are some observations from both events we hosted so far.

Ambience
The atmosphere during both Editatonas was always cordial and fun. Throughout the events, we could hear frequent murmurs of women talking, giving each other feedback, laughing and cheering. For the first event, organizers offered coffee and cookies, but most of the participants brought food and drinks to share: fruits, pastries, sweets, etc; since we didn’t have a scheduled time for meals, women would go to eat on their own time in the venue’s kitchen. For the second event, we had fabulous stickers made by User:Christian Cariño.

Online Collaboration
People who couldn’t attend in person where encouraged to join online: workshops were streamed and several people attended to learn how to edit. There was even a group of 5 women who met in an Argentinian coffee shop to join the first event together. For the second Editatona, we had online participants from the Mexican state of Oaxaca.

Activities
We also hosted special activities to complement the editing workshops. During the first event, we had a session about gender-neutral language; participants were divided in two groups: one group attended the talk and the other kept editing Wikipedia. For the second event, we organized activities two days earlier, including: a Wikipedia edition workshop, a workshop on Digital Women Security and another on Info-activism (these last two workshops were organized by SocialTIC). We also hosted a talk on Human Rights for Women: the right to information by Mexico City’s Human Rights Commission (CDHDF).

Media
The Editatona was well documented. Luchadoras TV made a video of the event and hosted an earlier program on Rompeviento’s internet TV channel. The Wikipedia edition workshop was streamed, recorded and aired in Fractal, a program on ForoTV, on broadcast TV. As a result of our social media campaign, we had a lot of interactions over social networks, with the hashtag #Editatona.

Here are some of the lessons we learned from the Editatona program.

Social media helped draw a lot of participants
We never thought that a social media campaign (Facebook and Twitter) would generate so much attendance — far exceeding our quota for enrollment in the first Editatona. The first venue we selected can only hold about 30 people — and within hours from our first announcement, we had surpassed that number. So, we decided on a 50 person quota, but continued receiving more requests: we had 87 by the end — compared to an average of 30-40 people for other Wikimedia Mexico events. These numbers are very encouraging. In the second Editatona, we registered fewer participants, since we had changed the venue to accommodate more people, but we still engaged 25 women in person.

Men or not?
One of the questions we had to solve was whether or not to accept men for these events. At first, we didn’t have a problem with men attending; but when we reviewed our first registrations, we saw that more women wanted to join the Editatona. We decided to give women preference over men, so they could participate: we can’t deny access to women for a women’s event. Wikimedia Mexico’s community and a lot of followers on Facebook and Twitter accused us of being exclusive; we responded by citing the importance of ‘positive discrimination’, to favor members of a disadvantaged group who suffer from discrimination within a culture. In the second Editatona, we decided to continue registration for women only; the key difference is that we hosted previous activities that could assist men and women prior to the main event.

Editatona
Choosing a name for this program was hard. We proposed Editatona, our feminine word for the traditional ‘Editathon’ name in Spanish, which immediately raised eyebrows: ‘Editathon’ is derived from ‘hackathon’ and has its origins in the hacker culture. After discussing this with the Wikimedia Mexico community, we decided to call it Editatona because we intended for the content to be created by women with a feminist perspective. We wanted to make it clear that this is an initiative to engage and attract more women to Wikipedia.

Editing
Unfortunately we had low results in terms of edits made and articles created. This occurred for several reasons. One was technology: we experienced bad connectivity, not all the participants had their own equipment and some of them wanted to edit the same article. Also, a number of women spent a lot of time discussing the format and content of a single article, so the creation process was very slow.

Engagement
Participants seemed engaged by this program and expressed appreciation for these events. One woman told us: “The Editona was incredible for me. It think it’s a great opportunity to record women’s history on Wikipedia. In addition, it has helped us build a community between us.” And another participant chimed in: “It has always seemed important to me that the participation of women become more visible.”

Overall, the Editatonas were a beautiful and hopeful experience for many participants, who enjoyed this opportunity to come together and edit Wikipedia articles with and about other women.