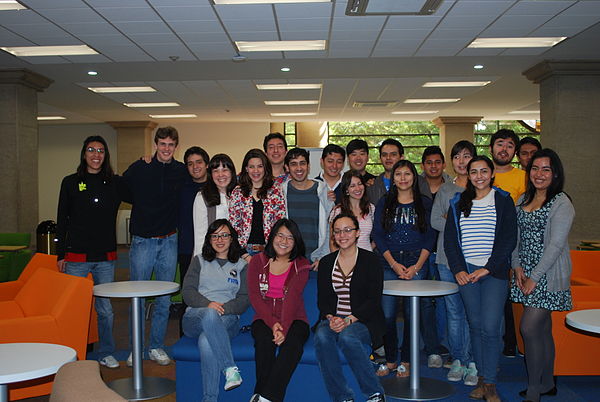 A Mexican student shares her experience editing Wikipedia as part of her community service, working with other students and the Wiki Learning team at Tec de Monterrey university (Maria is standing fourth from the left). Photo by Thelmadatter, freely licensed under CC BY-SA 4.0.

Most university students around the world share many of the same goals: they must attend classes, learn as much as possible, get support through a scholarship or a student loan — and, finally, graduate. But in Mexican universities, students must also take community service (“servicio social”), which is a legal requirement before they can graduate. Students can apply what they’ve learned in their courses to help communities through a number of different theoretical and practical activities.

The idea of servicio social emerged in the thirties in Mexico’s institutions of higher learning, as a direct response to the need to reconstruct the country after the the Mexican Revolution. In 1945, Mexican president Manuel Ávila Camacho passed a law to make community service mandatory for all undergraduate students. Servicio social helps students develop as true citizens who are conscious of their country’s current political, economic, social, and cultural circumstances — and who can take action to resolve some of the issues associated with these fields.

Editing Wikipedia has been one of the options for students at Tec de Monterrey since 2014, through “Wiki Learning” — a popular program for many students. I personally chose this program for my servicio social, and it has been a valuable experience of continuous learning and enrichment, both personally and culturally. By editing Wikipedia, I’ve been able to positively impact the Spanish-speaking community, as well as my fellow students and professors. 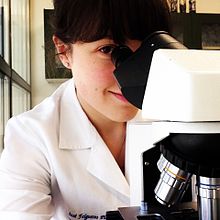 There are several reasons why I chose to edit Wikipedia for my servicio social requirement. First of all, I share the ideals of the free and open knowledge movement, as I consider education a public utility that should be accessible to everyone. Thanks to technology, knowledge has been integrated into more marginalized areas of the world: little-by-little, it has been transforming and improving the quality of life in communities that are now gaining access to Wikipedia’s shared knowledge base.

Closer to home, in Mexico, where a quality education is scarce and one of the few tools we have to grow as a country, it is imperative that knowledge reaches all of the population. From my point of view, Wikipedia has been a community service of impressive magnitude, and I am excited to be a part of it. Being a “knowledge gathering project,” this service goes beyond being a mere hoop to jump through in order to graduate: it helps students become ambassadors — not only on a national level but on a global level as well.

However, Wikipedia has faced a great deal of criticism precisely because of its public nature. I understand why some professors condemn the use of this information portal, as anyone can contribute to Wikipedia with any type of information, true or false. As a frequent user of Wikipedia, what attracted me was the opportunity to break down this prejudice about the movement’s lack of accuracy. When I chose my option for servicio social, Wikipedia was one of the few choices which I considered — not only to meet a requirement, but also as an opportunity for personal and professional growth. Now, after almost a year of working on this project, my expectations have proven correct.

Those who contribute to Wikipedia generally do one of three activities: editing, translation, or research. During my time, I have translated various articles relating directly to my major, biotechnology, such as “Social history of viruses“, “History of aspirin” and “Genetic expression profile” — as well as others that interested me, such as “Major depressive disorder“, and “Renewable energy in Scotland“. Translating articles from English to Spanish helps make this information more accessible to Spanish-speaking countries. The ability to work with both languages on such an intensive level allows me to also improve my writing skills, vocabulary, and spelling — as much in English as in Spanish. By translating these articles, I not only contribute to the number of articles in Spanish Wikipedia, but I also improve my own skills in each language.

Day of the Dead altar in Tepoztlán from Fall 2014. Photo contributed by MaríaJosé, CC BY-SA 4.0.

I have also contributed a number of images to Wikimedia as part of my assignment (see example). As a lover of photography and a beginner in this type of work, volunteering for Wikipedia pushed me to look around my country at festivals, traditions, and unique moments in Mexico that are worth sharing with the world. To date, I have contributed fifty photographs to Commons in the ‘Day of the Dead in Tepoztlán’ category — and another 29 related to an exhibition of Spanish exiles in Mexico in “El Exiliio Español en la Ciudad de México: Legado Cultural.”

Servicio social with Wikipedia is ideal for students who want to be their own boss. I can decide when and where I want to work, since I only need a user account, a computer, and Internet access. However, I don’t always work alone: there are meetings about two times a month with other participants to peer review our work, such as the recent Experiencias Retadoras event. I am also constantly in touch with our coordinator, who supports and guides us, to make sure our work has the most impact possible and meets the requirements of the Spanish Wikipedia community. In my opinion, Wiki Learning’s cordial and collaborative atmosphere is a very important reason for the success of this program.

The Spanish Wikipedia grows every day with the participation of people from all over the world: they work hard to constantly improve and enrich the encyclopedia, making sure it reaches as many people as possible. The objective of servicio social is to create a link between students and their social environments, which today is as much global as local: so working with people around the world makes this possible at the global level. And at the local level, the Mexican community benefited directly from the work of our university and its students. I believe, as a student of this institution, that Tec de Monterrey is meeting this goal by linking servicio social with Wikipedia.