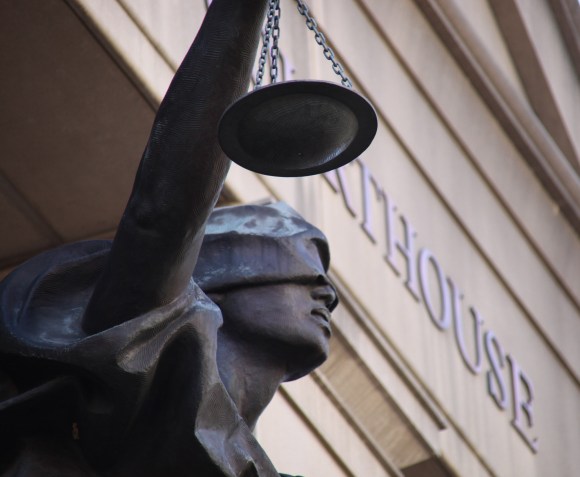 Blind Justice stands with scales aloft over the Albert V. Bryan United States Courthouse in Alexandria, Virginia. Photo by Tim Evanson, CC BY-SA 2.0.
In March, the Wikimedia Foundation filed suit against the National Security Agency (NSA) and the Department of Justice (DOJ) of the United States.[1] The lawsuit challenged one of the NSA’s mass surveillance programs, specifically the large-scale search and seizure of internet communications known as “upstream” surveillance. Our aim in filing this suit is to end this mass surveillance program in order to protect the rights of our users around the world. We are joined by eight other organizations and are represented by the American Civil Liberties Union (ACLU).
Today, we’re pleased to provide a brief update on the progress of Wikimedia v. NSA. After we filed our original suit, the United States government filed its anticipated motion to dismiss our suit on May 29. This is a basic procedural hurdle common to most lawsuits in the United States. On June 19, our lawyers at the ACLU filed an amended version of the original complaint in response to the government’s motion. Filing an amended complaint is an automatic right under federal court rules and a common step in United States lawsuits, allowing us to further reinforce our claims. This version of the complaint includes additional information, such as a more detailed explanation of the operations of the Wikimedia projects.
As it now stands, both sides will present their arguments at a hearing currently scheduled for September 25. In the meantime, the government’s motion to dismiss the amended complaint is due August 6, our response is due September 3, and the government’s reply is due September 17.

Spread the word about inappropriate surveillance. Art by Rich Black, CC BY 3.0.

Headquartered in New York City, the exceptionally strong ACLU team representing us in this case has a broad range of experience in national security issues. They recently won an important victory at the Second Circuit Court of Appeals in ACLU v. Clapper, a case dealing with government surveillance of telephone metadata. In addition, they have taken a strong stand on the recent passage of the USA FREEDOM Act. We are grateful that they have chosen to represent the Wikimedia Foundation pro bono.
During the last few months, the Wikimedia Foundation has been very involved in preparing court documents and confirming various points of legal research; this required intense focus from our legal team. To reduce the workload on our staff and better assist the ACLU, we decided to ask Cooley LLP, our litigation law firm, to provide some reinforcement. Cooley’s hard work has enabled us to support the ACLU’s time-sensitive needs. Cooley had generously agreed to charge us their reduced fee rate for these last few months, and we are thrilled about their recent decision to represent us pro bono as we enter the upcoming fiscal year. We are extremely grateful for their continued support of the movement and mission.
We have always expected a particularly difficult fight, but with the ACLU and Cooley, we are committed to seeing this through and presenting the strongest case possible.
We look forward to putting our claims before the Court. As the case proceeds, we will continue to post brief updates to keep the community informed. To read the pleadings that have been filed to date, please click here.
Michelle Paulson, Senior Legal Counsel
Geoff Brigham, General Counsel
Special thanks to all who are supporting our efforts in this matter in a variety of ways, including Patrick Toomey (ACLU), Jameel Jaffer (ACLU), Alex Abdo (ACLU), Ashley Gorski (ACLU), Aarti Reddy (Cooley), Amanda Levendowski (Cooley), Patrick Gunn (Cooley), Ben Kleine (Cooley), Aeryn Palmer, Jim Buatti, Mehtab Khan, Lexie Perloff-Giles, James Alexander, Philippe Beaudette, Oliver Keyes, Kevin Leduc, Faidon Liambotis, Andrew Otto, Dan Andreescu, Aaron Halfaker, and Erik Zachte.