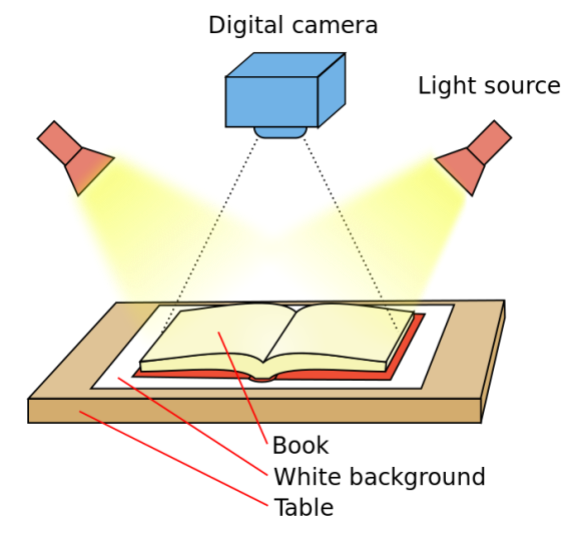 Digitize text manually with a book scanner. Photo by Oona Räisänen, freely licensed under CC BY-SA 3.0
On Tuesday, July 28, 2015, the Wikimedia Foundation hosted an engaging panel discussion on Copyright in the Age of Mass Digitization. The event, which attracted over 110 attendees from diverse professional backgrounds and perspectives, explored the legal challenges posed by mass digitization and possible ways forward.
Speakers included Pamela Samuelson, professor at Berkeley Law School and UC Berkeley’s School of Information; Joseph Gratz, a partner at Durie Tangri who represented Google in the Google Books cases; Lila Bailey, a copyright attorney whose clients include the Internet Archive; and Melvin Gibbs, a jazz musician and President of the Content Creators Coalition, an artists’ rights advocacy group. Wikimedia General Counsel Geoff Brigham introduced the event, and Wikimedia Legal Director Yana Welinder—who oversees the Foundation’s copyright and public policy strategy—moderated the discussion.
Each year, the WMF’s summer legal interns put together an event open to the public on topics related to law, technology, and free knowledge. This year’s panel was an especially timely event: in June 2015, the U.S. Copyright Office released its report on Orphan Works and Mass Digitization, and the Office is currently soliciting public comment through October 9, 2015.
The topic of copyright reform is also one of particular relevance to the Wikimedia Foundation and its mission of sharing knowledge across the globe. Overprotective copyright regimes rob the public of access to knowledge and culture, and the legal ambiguity surrounding issues like freedom of panorama and orphan works disfavors free sharing and innovation.
Wikimedia projects could also be affected by regulation of digitization—the conversion of analog information, like objects, images, or sounds, into a digital, web-usable format. Wikisource and Wikimedia Commons represent two examples of digitization projects that are the product of decentralized collaboration. These kinds of projects should be considered when crafting policy in an age of mass digitization, in addition to initiatives undertaken by larger institutional players, to ensure that free knowledge can continue to flourish.
According to the Copyright Office, mass digitization involves reproduction on a scale that renders it impossible to negotiate individual permissions. The Copyright Office report proposed an extended collective licensing (ECL) mechanism for authorizing projects on terms set forth by the parties under government supervision.
The panelists generally agreed that the Copyright Office’s proposed ECL pilot program was problematic and did not sufficiently account for differences among mass digitization projects, but disagreed about the value of mass digitization generally. While musician Melvin Gibbs felt strongly that artists should retain autonomy over their work rather than be subject to any “opt-out” system of permissions, other panelists believed mass digitization initiatives offered an important channel for historical societies, libraries, and archives to make cultural heritage more widely available for others to access, curate, and build upon.
Lila Bailey was especially concerned about access for end-users, asserting that “the Internet is the most democratizing force that we have” and that the anxiety over revenue distribution was misguided since “there just isn’t a pot of gold at the end of the library rainbow.” Pamela Samuelson discussed the role that fair use can and ought to play for certain mass digitization initiatives and articulated the perspective of many authors especially academics who want their work to be more widely available. Joseph Gratz framed the issue in terms of the search for an economic model that allows creators to be compensated but also gets books into people’s hands or onto people’s screens, including when the author cannot be identified. A recording of the event is available here.
Following the panel discussion, attendees, who hailed from technology companies, major law firms, non-profits, libraries, archives, and artists’ groups, enjoyed a reception sponsored by Durie Tangri.
The WMF’s legal internship program
Wikimedia’s legal internship program, launched four years ago, has nurtured dozens of law students and recent graduates interested in intellectual property, privacy, and other cyberlaw issues. The Foundation recruits legal interns for the spring, summer, and fall. All law students and recent graduates are welcome to apply.
Alexandra Perloff-GilesWikimedia Foundation Legal Intern*
* Thanks to my fellow summer legal interns who were essential to organizing this event: Christine Bannan, Arielle Friehling, Jason Gerson, and Alex Krivit.