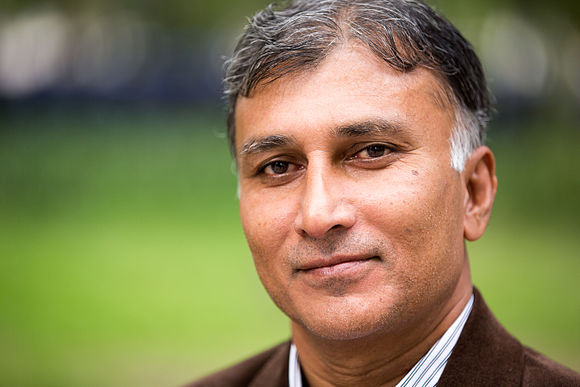 I am fortunate to have met Ahmed Nisar Syed on three important events over the last year—the WMF-India Community Consultation in Bangalore in October 2014, the Hindi Wiki Sammelan Meet at Delhi in February 2015, and most recently during Wikimania 2015 in Mexico this July. These only highlight his proactive approach to offwiki events and meetups besides being a versatile contributor to Wikipedia in four languages—Urdu, Telugu, Hindi and English—as well as on other Wikimedia projects. He edits on most wikis as Ahmed Nisar, and on the Urdu Wikipedia as Ahmadnisar.

Although currently based in Pune, India, Nisar was born in Madanapalle, a city in the Chittoor district of Andhra Pradesh. He spent almost 23 years in the field of education. During this time, his multilingual pursuits resulted in the completion of his master of philosophy dissertation, entitled The Impact of Urdu on Hindi Films. Nisar retired in 2006, and one of his major interests since 2007 has been editing Wikipedia in areas as diverse as religion, philosophy, geography, politics, languages, and science.

Nisar recalls that, during his initial period of editing, there were only two active Indian users on the Urdu Wikipedia—himself and Samarqandi. Today, he notes that there are at least fourteen currently active users in India, including Mohd Shuaib and Rehan Kausar, and more from Pakistan, such as Tahir Mahmood. Urdu is spoken by around 4.7 percent of the world’s population, and the Urdu Wikipedia currently contains more than 82,000 articles.

On the Telugu Wikipedia, Nisar notes Vyja Satya, Sujatha, Venkataramana, Arjuna Rao and Sultan Khader as excellent contributors, as well as many other active users. He also speaks about the good editing association he shared with Manoj Khurana and myself on the Hindi Wikipedia.

Nisar stresses that, because they are mutually intelligible languages, there is a tremendous scope of cooperation between projects in Hindi and Urdu. In his own words, “If you want to develop the Hindi Wikipedia, you must develop the Urdu Wikipedia and vice-versa.”

Nisar was the recipient of the 2014 “Komarraju Lakshmana Rao Wikimedia Puraskaram” (KLRWP) Award for his contributions to the Telugu Wikipedia, and has been part of outreach events for Wikipedia in both Telugu and Urdu languages. In line with his linguistic pursuits, he favours an integrated plan for the promotion of Persian script-based Indic Wikipedias, such as those in Urdu, Kashmiri, Sindhi, Punjabi (Shahmukhi script), as well as the Dakhni Urdu Wikipedia, which he hopes will be launched in the near future.

As an academic, Nisar has a keen eye on classical Urdu literature available in several libraries of high repute. He already had talks with some of the resource persons and intends to work towards their digitization either with the help of an Individual Engagement Grant or through other means. “Talks are going on with few institutions [about the] digitization of their library books on Unani medicine,” he says. “I strongly believe that these kinds of projects will definitely help to do some better work.”

Nisar is also exploring the possibility of holding new Urdu Wikipedia workshops in different locations across India as part of a team effort involving three Urdu Wikipedia sysops—himself, Mohd Shuaib, and I.

On a parting note, Nisar warns Indians against excessive preference to English over their native languages. He cites the example of large sections of the Telugu-speaking population opting for English media in Andhra Pradesh. “The government, private and corporate schools are also encouraging it,” he says. “It will one day lead [the language to become] extinct. Urdu is also sailing in the same boat.”

Similarly, he notes that Urdu language experts are seemingly unaware of current affairs and grammar. “It is a matter of fact and a point of jeopardy too, that the Urdu language experts, who have completed their postgraduate and doctoral studies, are not well versed with current knowledge,” he explains. “There are no Urdu experts, even, who are well versed in the modern sciences and technologies.”

He hopes that Wikipedia will serve as a bridge between the knowledge of traditional culture and modernity, provided Wikipedians contribute in their native language and thus preserve their heritage for future.