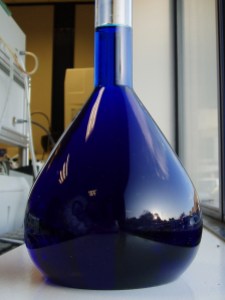 Methylene blue, one of many redox indicators. Photo by Amanda Slater, freely licensed under CC by-SA 2.0.
After twelve years, the Ukrainian-language Wikipedia has passed another milestone—600,000 articles.
The article reaching the milestone was Окисно-відновні індикатори (Redox indicators), substances that are used in chemistry to determine the equivalence point of an redox reaction.
As it says in the article, most often they are organic substances showing redox properties which are used as such indicators, as well as metal-organic compounds in which the oxidation number of the metal changes on reaching certain chemical potential. In both cases the structure changes are followed by changing the colour of the substance.
The articles for previous hundred-thousand milestones are Гойтосир (Goitosyros), Список країн за видобутком вугілля (List of countries by coal production), Шумейко-Роман Олена Олександрівна (Olena Shumeiko-Roman), Міяма (Miyama, Fukuoka), Електронний газ (Free electron model). The last five-hundredth one was created on May 12, 2014.
There are currently 2386 active editors of Ukrainian Wikipedia—users who have made at least one edit in the last 30 days. Wikimedia Ukraine, the local chapter in the country, works on involving new editors by organising wikiworkshops (currently Wikifest:Luhanshchyna: Wikipedia editing workshops series in Luhanshchyna), getting students to write articles as an educational activity, and answering questions).
Recently the English Wikipedia has also passed another milestone—5 million articles. We do believe that encyclopaedic articles about all important phenomena, events, personalities, and things must exist in the Ukrainian language as well; the better quality they have, the better it is for everyone.
We call on you to start editing Wikipedia—create your article today!
Vira Motorko, Wikimedia Ukraine
The post was originally published on the Wikimedia Ukraine blog.