“Are Wikipedia citations important evidence of the impact of scholarly articles and books?”

This paper[1] contributes to the discussion of the relation of Wikipedia and academia, in the context of the use of academic publications on Wikipedia. The authors looked at whether articles and academic books (monographs) indexed in the Scopus database (302,328 articles and 18,735 books) are cited by Wikipedia, other articles, and books. They found that only about 5% of all academic articles are cited on Wikipedia, compared with about 33% of books. Arts, humanities and social science books are cited almost twice as often as those from natural and medical sciences. The authors conclude that Wikipedia citations are not strongly related to scientific impact, but more so to the work’s educational and cultural one. They further conclude that Wikipedia citations are likely a good source for understanding the work’s non-scholarly impact, particularly for books. On that note, while the authors discuss some limitations of their study, they do not address the topic of open access, which could explain the discrepancy between the use of books (many of which are at least partially available through online through Google Books, a database the authors themselves used as well in this study) and articles (most of which are not available to an average reader). Therefore the authors’ conclusion should be moderated by the fact that while in Wikipedia is not currently citing the majority of academic articles, as said majority is not readily available to the project contributors, further research is needed on whether Wikipedia can be used to understand the impact of scholarly open access sources. (See also the review of a related paper in our August issue: “Amplifying the Impact of Open Access: Wikipedia and the Diffusion of Science”.) 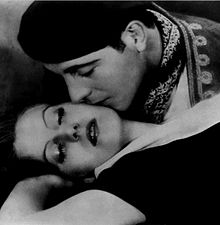 Greta Garbo and Ricardo Cortez linked together (d:Q638165#claims) in the 1926 silent film “Torrent”

Exploration of co-stardom networks between 1920 and 1930 using Wikidata

In this blog post[2], Pierre-Carl Langlais relates how he used actor–movie relationships from Wikidata to graph and examine co-stardom networks in the 1920s and 1930s. His exploration, based on the assumption that transnational collaborations were easier in silent films productions, aimed to determine whether co-stardom networks tightened by country after the move to spoken film.

The author queried actor–movie data from Wikidata, processed it with R to create actor–actor relationships, and created graphs using Gephi for two periods: 1920–29 and 1930–39. He found that (software-determined) clusters of actors did seem to follow countries for the 1930–1939 period, with some overlap for countries with the same language. However, the software had less success identifying clusters for the 1920–1929 period. Some clusters mixed different countries, and some countries were split into several clusters. The author invited readers to explain those results. He also highlighted the case of transnational actors like Greta Garbo and Maurice Chevalier.

“Editing for equality: the outcomes of the Art+Feminism Wikipedia edit-a-thons”

This article[3] discusses the Art and Feminism Wikipedia edit-a-thon, an event the authors describe as the largest of such events ever. Framed in the context of importance of gendered activism and information activism for librarians, it discusses what the authors perceive as a growing collaboration between gender and information activists that also includes Wikipedia GLAM activists. The article presents an interesting overview of this developing movement.

The planning for next year’s Wikimania is in full swing. The organizers are experimenting with approaches that differ from those of previous years, and that includes asking the community a bit more explicitly as to what issues they’d like to see covered and what they’d like to learn about during Wikimania. One of the topics considered for this advance feedback is research, which is understood to encompass Wikimedia coverage of research-related topics as well as research on Wikimedia-related topics, and everything in between. How should such research-related topics be addressed by the event? If you have suggestions in this regard, please put them forward here. Thanks!