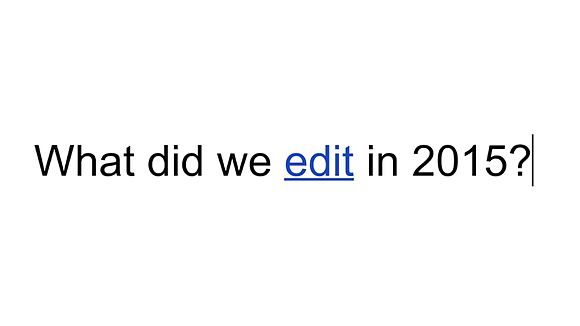 Watch #Edit2015, a culmination of a year on Wikipedia, all set to Vivaldi’s “The Four Seasons”. You can watch it in full on YouTube or Vimeo. Video by Victor Grigas, licensed under CC BY-SA 3.0.

Pluto came into focus. A Shanghai skyscraper climbed into the sky. Tunisia’s civil society won the Nobel Peace Prize. A Pharaoh chased down the Triple Crown. Paris mourned.
Wikipedia editors recorded it all in 2015, a world of volunteers editing a year into history.
Today you can experience some of the wonder, pain, and triumph of 2015 in four minutes with #Edit2015, the Wikimedia Foundation’s second year-in-review video, replaying a year through the lens of history’s largest crowd-sourced movement.
A collaboration between the Wikimedia Foundation’s storyteller Victor Grigas and several volunteer editors, #Edit2015 celebrates the individuals all over the world who’ve invested thousands, if not millions, of hours in curating Wikimedia sites.
The year was scarred with tragedies. Along with attacks in Beirut and Paris, #Edit2015 shows glimpses of the European migrant crisis, the death of Freddie Gray, the Syrian Civil War, a terror attack on an airliner in the Sinai, and the Mina stampede at Mecca. Wikipedian Bassel Khartabil, imprisoned in Syria and possibly sentenced to death, is represented with his contributions to recording the ancient city of Palmyra in 3D for future generations.
Appropriately, Grigas included World War II images alongside tragic contemporary events because “the largest and deadliest human conflict that has ever happened was 70 years ago, so it was memorialized this year by China and Russia—they thought it was appropriate to remember.” The style of that scene was inspired by The Fifth Element, where a main character (Leeloo) researches ‘war’ on a future digital encyclopedia and sees a montage of war images. “I interpreted this scene as the main message of that film, to show what awful things we’re capable of and how we need to know that they exist so we can do something about it,” Grigas says.
#Edit2015’s jubilance shows in the sporting events of the year, like American Pharoah’s, Triple Crown, and the victors of the FIFA Women’s World Cup, Tour de France, Monaco Grand Prix, and La Liga. And history repeated itself with the ongoing jinx of the Chicago Cubs, tarred by the Curse of the Billy Goat.
Fans looked ahead to Star Wars: The Force Awakens. Nobel Prize laureates included Tunisia’s National Dialogue Quartet, and volunteer Wikipedia editors were on hand at the ceremony to document the recipients. The quartet now has an article in 45 languages. Earthlings gazed at a dwarf planet for the first time with the first-ever high-resolution photos of Pluto. Hundreds of thousands of readers were able to learn from the 5,700 word “featured” article, a status that is considered the best Wikipedia has to offer, and if they wanted to know more about the Solar System, they could turn to dozens of articles encompassed in the featured topic.
Wikimedia volunteers are represented in every frame of #Edit2015 through the articles and images presented, including the fruits of Wiki Loves Earth 2015, an international photo competition sponsored by the Wikimedia community to illustrate protected natural areas of the world. During 2015, more than 100,000 pictures were submitted by nearly 9,000 participants. Grigas notes that he had to include them because the images “were just stunning. I wanted to go print them into posters to hang up in my office, which you can legally do because they are all freely licensed. I actually know a photographer with a professional poster-size printer who did just that with images from Wikimedia Commons,” Wikipedia’s central media repository.
Wikipedians continue to build that vast collection of freely licensed images, and they climbed to the sky in a construction montage showing the Shanghai Tower reach its ultimate height of 632 meters (2,073 feet). “I love when you can animate something that was never intended for it,” Grigas says. “I put the photos in a sequence, timed it to the beat of the music, and this skyscraper sprouted up like a mushroom.”
Unlike some news media, Wikipedians take a people-powered, global view of the year that Grigas said was an honor to capture. “The montage of everything together expresses the international concept. I love seeing Georgian, Spanish, Japanese, and Arabic all together.”
Ed Erhart, Editorial Associate
Wikimedia Foundation