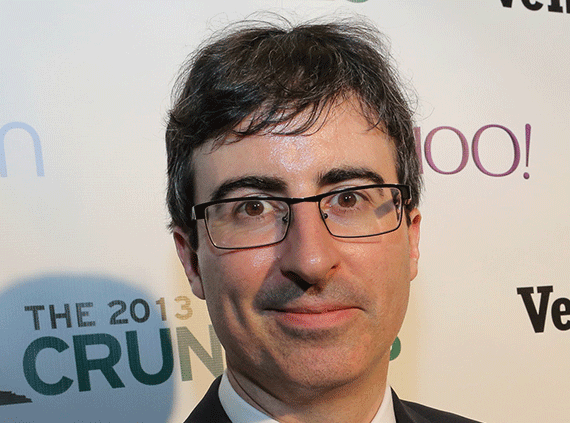 Our story on John Oliver’s ‘fowl’ jokes was one of the blog’s most popular posts of the year. Photo by TechCruch, freely licensed under CC BY 2.0.
On December 15, the Wikimedia Foundation’s Victor Grigas, in collaboration with several Wikimedia community members, released #Edit2015, a look back at the wonder, pain, and triumph that happened in the world over the last year.
With that in mind, we here at the Wikimedia Blog decided to take on a decidedly narrower scope: what stories were the most popular on the blog this year? What did our nearly 700 thousand unique visitors, generating over 1.1 million views, flock to?
The top five is decidedly heavy on Foundation announcements—chief among them being actions we’ve taken to protect our users.
We sued the US’s National Security Agency to challenge its mass surveillance practices, an announcement that had over 70,000 views, by far the most views for the blog this year. Jimmy Wales said at the time that “We’re filing suit today on behalf of our readers and editors everywhere … Surveillance erodes the original promise of the internet: an open space for collaboration and experimentation, and a place free from fear.”
You can follow our Legal department’s frequent updates with the Wikimedia v. NSA category; we are currently appealing Judge T.S. Ellis, III’s ruling that we lack standing to bring the challenge.
Also in 2015, we began encrypting all of our traffic with HTTPS to ensure that users and readers alike can use our services “without sacrificing privacy or safety,” a process took years to complete (#2):

Other announcements included the disclosure that 381 accounts on the English Wikipedia had been blocked for so-called ‘black hat’ editing (#3), and the release of a new artificial intelligence service (“ORES”) that “highlight[s] potentially damaging edits, [allowing] editors to triage them from the torrent of new edits and review them with increased scrutiny” (#5). This development is quite exciting; Aaron Halfaker, the lead researcher, hopes that the new automated service will conversely increase the number of human editors by reducing their workload.
Pop culture made several appearances as well. Our post on John Oliver’s chicken-related (“fowl”) jokes and their impact on several Wikipedia articles was amusing enough to land at #9 on the list. In a lengthy diatribe about the plight of independent chicken farmers vis a vis the major chicken producers they contract with, he asked his audience to vandalize the Wikipedia pages of congressional representives who had supported the producers—”unless they want [a “chicken f****r”] label to follow them for the rest of their lives, they might want to think [about their votes], because “chicken f****r” accusations do not come off a Wikipedia page easily. Or if they do, they tend to go right back up.”
Soon after, we published a descriptive essay on Wikipedia’s coverage of Caitlyn Jenner’s transition (#7) and how the experience of Chelsea Manning played a crucial role in the encyclopedia’s response.
The photographs that researchers believe feature the first-ever smile and photobomb—two of many images that the National Library of Wales donated to Wikimedia Commons—was intriguing enough to close out our list.

As an honorable mention, we would be remiss in leaving out “My life as an autistic Wikipedian” (July 31; #12)—a remarkably poignant account from editor and Wikimedia Foundation staff member Guillaume Paumier.
Thank you for reading the Wikimedia Blog; we hope for an even more successful 2016.
Ed Erhart, Editorial Associate
Wikimedia Foundation