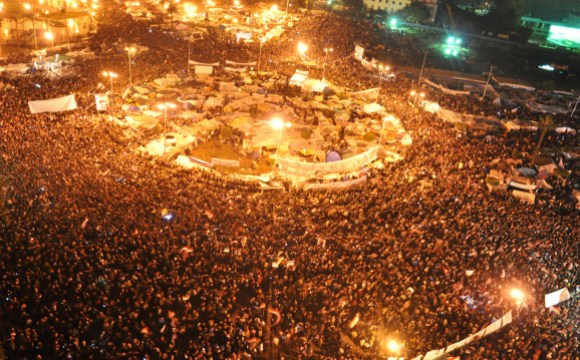 War and tragedy features heavily on the list. Photo by Jonathan Rashad, freely licensed under CC BY 2.0.

In the beginning, there was Creationism.
The much-debated belief that a supreme being created the physical universe was the most-edited article in Wikipedia’s first year, 2001. But in the genesis of the open-sourced encyclopedia powered by the world, that didn’t amount to a lot of edits: just 179 edits made it the top article for all of Wikipedia’s first year.
As Wikipedia turns 15 on Friday, things have evolved a great deal. The English-language Wikipedia is just one of many Wikimedia projects today, and its 5,053,647 articles have now been edited 808,187,367 times (as of press time). Parsing those edits by year brings into focus a fascinating evolution of the current millennia online, revealing not just what people clicked on or read or even shared. The most-edited articles show what Wikipedians created and shaped and gave to the world as this millennia began to unfold.
The most-edited article this past year, Deaths in 2015, inspired 18,271 edits[1]—more than 100 times the total that put creationism on top 15 years ago. Deaths in [year] are staples in the English Wikipedia’s editing history; they are the most-edited articles in each year between 2007 and 2015, and the second-most in 2001, 2003, and 2006. As such, we’ve mostly omitted them in the list.
Obituaries of the year show up through the list of each year’s most-edited articles, but some surprises and zeitgeist zings also pop up among the most edited articles in each of Wikipedia’s 15 years. The aggregate list from all 15 years follows at the bottom.
Our thanks go to Stephen LaPorte for obtaining the year-by-year data. You can see the full list on Hatnote. 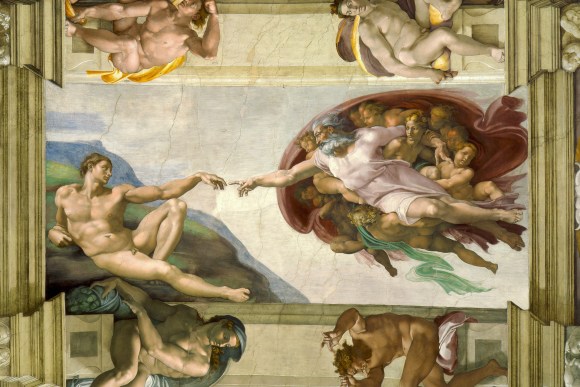 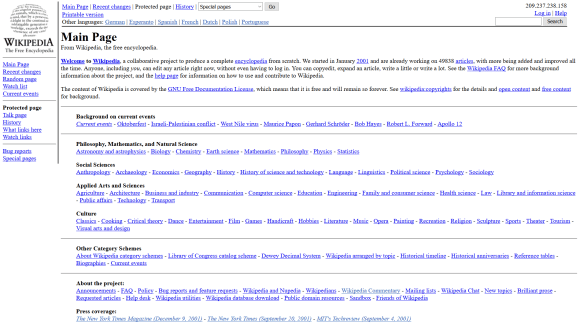 2002: Wikipedia’s Main Page got the most work in its second year, with 449 edits, after being moved from “homepage” (now an actual article). Also on this list in Year 2: List of Canadians, topped by the end of that year by author Margaret Atwood and songwriter Leonard Cohen. Screenshot by English Wikipedia editors, freely licensed under CC BY-SA 3.0. 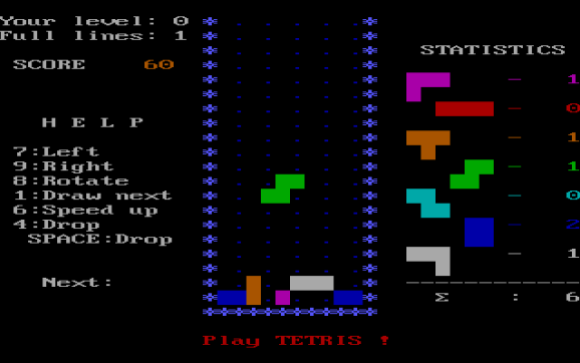 2003: In year three the Main Page again saw the most editing, jumping to 2,072 edits. Also on the list was Timeline of computer and video games, which creaks with age when looked at now: Super Mario Brothers, Tetris, Tomb Raider close the list. Screenshot by tetris.com, used under fair use in the Wikipedia article for this game. 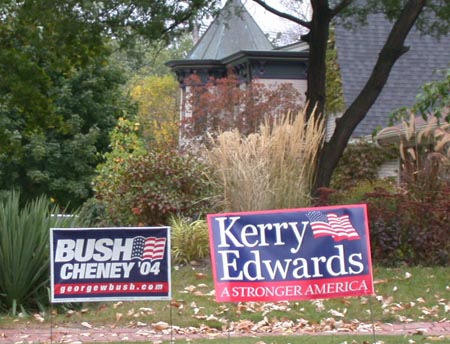 2004: Wikipedia got political in 2004, with Republican George W. Bush getting the most scrutiny from editors with (5,527 edits). After a community vetting process, the article is today rated as a “good” article. Coming in second, as in other arenas that year, was Democrat John Kerry. Photo by Matthew Trump, freely licensed under CC BY-SA 3.0. 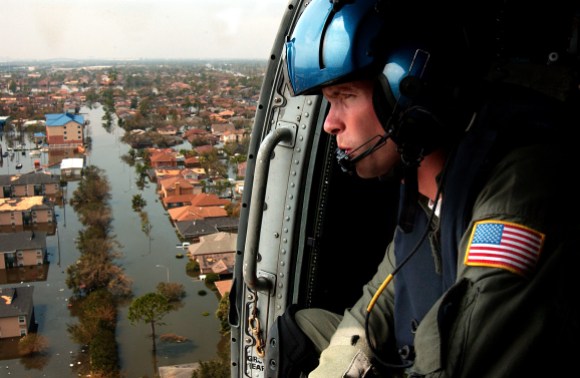 2005: George W. Bush was again the most edited article, this year with 20,894 edits; the havoc-wreaking Hurricane Katrina was right behind the president. #3 got meta: the Wikipedia article on Wikipedia. Photo by Petty Officer 2nd Class NyxoLyno Cangemi, public domain 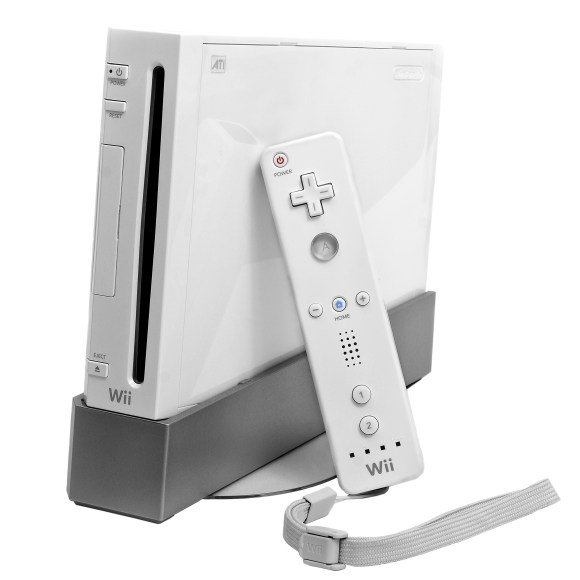 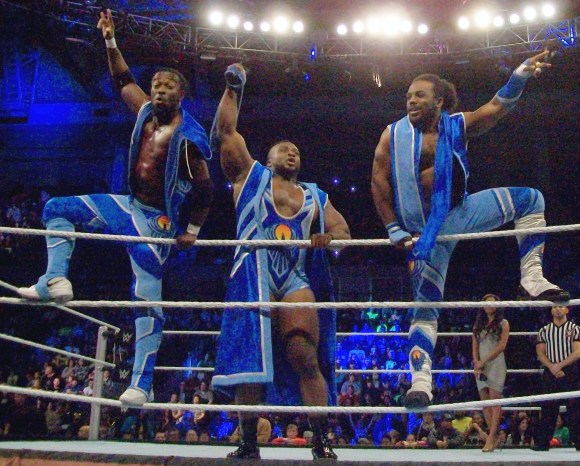 2007: The annual deaths of the year topped the list, as it did for the following eight years. It was followed by List of WWE personnel (9,825 edits)—one of the most-edited pages of all time, even though it only appears on this list once. #3 was the Virginia Tech shooting (9,116 edits) that killed 32 in April 2007. Photo by Megan Elice Meadows, freely licensed under CC BY-SA 2.0. 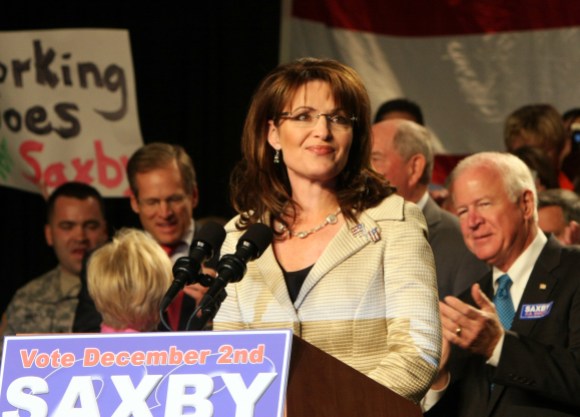 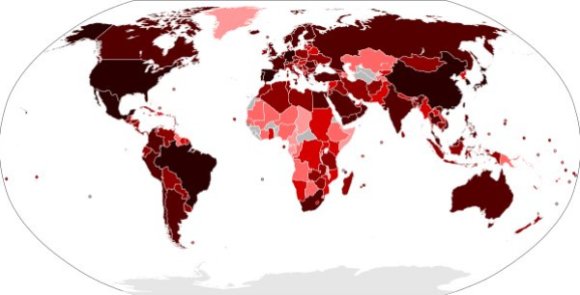 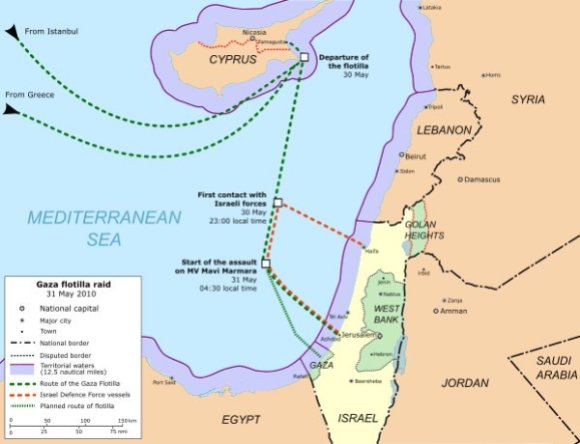 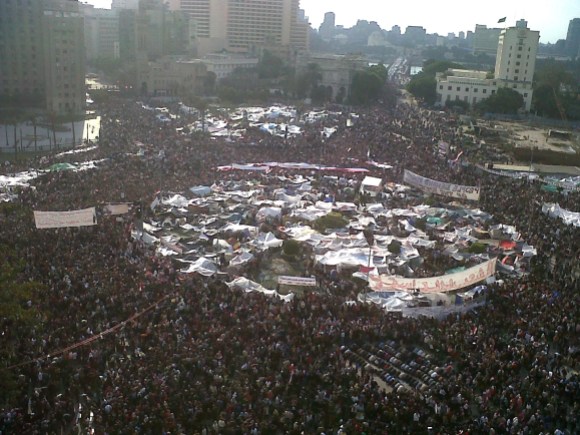 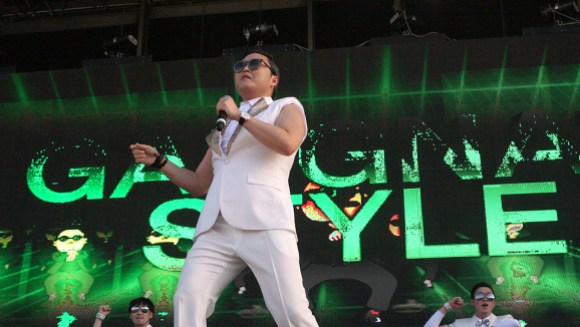 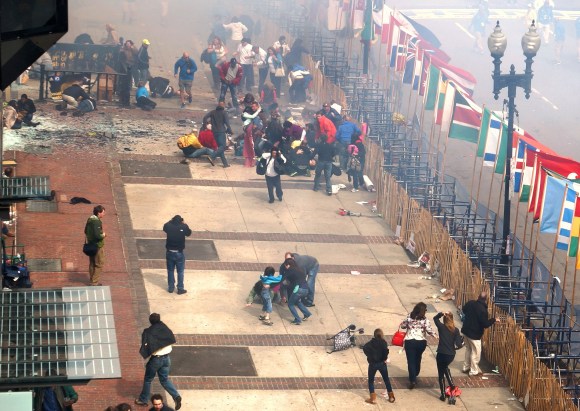 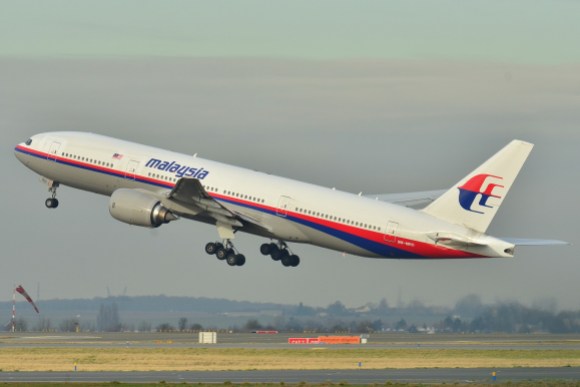 2014: Second on the list was Malaysia Airlines Flight 370, which disappeared in March of that year and was edited 10,055 times. Photo by Laurent ERRERA, freely licensed under CC BY-SA 2.0. 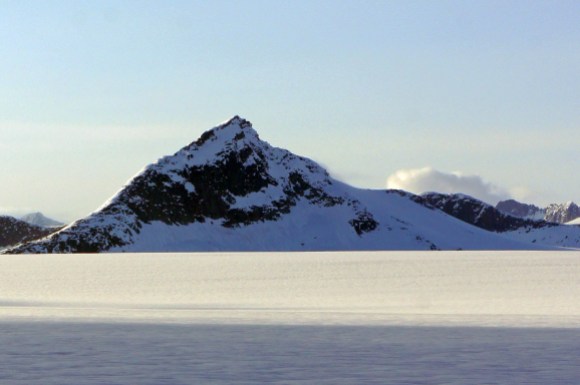 2015: And last year’s most-edited stories proved once again that Wikipedia can still be zany, despite all its accomplishments. While Deaths of the year was still the most-edited story, Geospatial summary of the High Peaks/Summits of the Juneau Icefield was #2—one editor made 7,265 edits, and everyone else made 29. Photo by Walles39, freely licensed under CC BY-SA 3.0.

Most-edited articles of all time 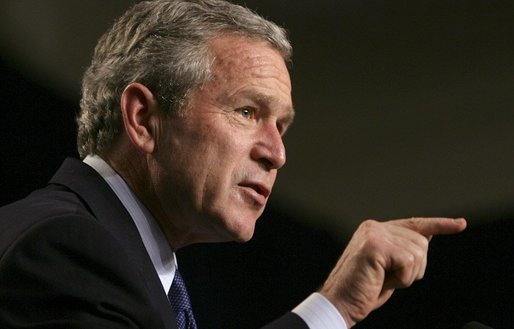 Photo by Eric Draper, public domain.
After getting the data for each year, we wondered what the most-edited articles on the English-language Wikipedia for all 15 of its years. It turns out that it’s a controversial president who served for eight years, followed by wrestlers.
George W. Bush, 2004 and 2005’s most edited article, topped this list—an unsurprising place, given that it was named as the most controversial topic on the English Wikipedia in Global Wikipedia, published in 2014. Several other articles on this list are mirrored on the most controversial list, such as list of World Wrestling Entertainment, Inc. personnel, which came in second by only a few thousand edits. History comes up with Adolf Hitler and World War II, while religion includes the Catholic Church and the article for Jesus.
Of course, Wikipedia’s oddities also spring up. While Britney Spears is a world-famous music artist, one would probably not put her into world history alongside the Catholic Church, Adolf Hitler, or World War II. Also making appearances is the list of programs broadcast by ABS-CBN, one of oldest television stations in Asia and the first in the Philippines, and Wikipedia’s meta article on itself
You can see more of this data on the English Wikipedia; sort by namespace zero. 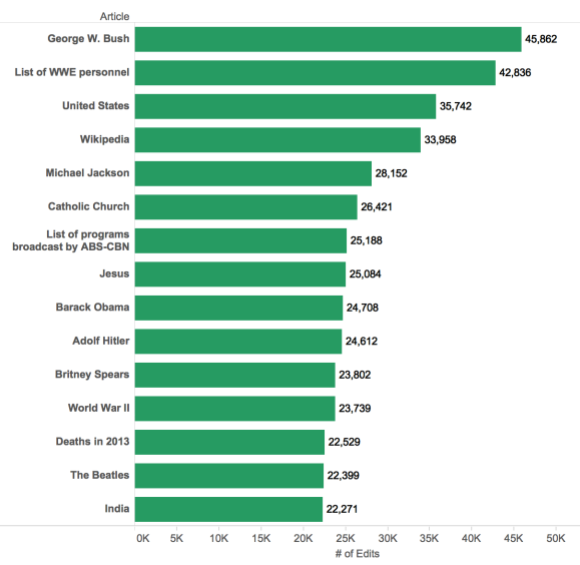 [1] Wikipedians chronicle the deaths by month, so the page now redirects to a so-called “list of lists of deaths.”