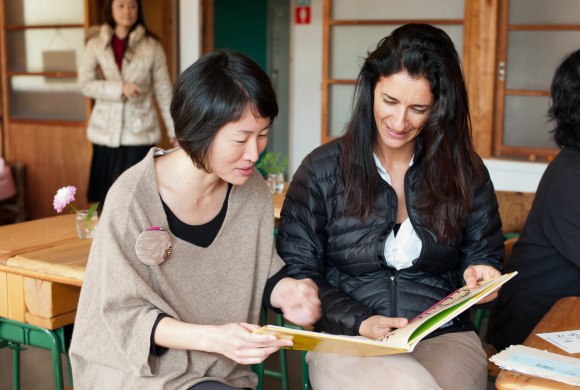 Talk to your librarians about Wikipedia 15. Photo by Joi, freely licensed under CC BY 2.0.

Update, January 21: The story of Wikipedia and libraries is being changed, updated, improved and broadened around the world this week. Forty-four news agencies and blogs have mentioned the #1Lib1Ref campaign, which has also received support from The Internet Archive, TechConnect, and the International Federation of Library Associations and Institutions. At press time, 983 tweets use the hashtag. You can follow along with the campaign on Twitter by watching the hashtag and following @WikiLibrary. Urge your local librarian(s) to join this global movement!

It’s important to recognize the lasting impact of Wikipedia on the online research environment: Wikipedia has become the default location for every type of researcher, both casual and professional, to start their research. After 15 years, Wikipedia has over 35 million articles in hundreds of languages, many of which have references and external links that guide researchers to authoritative sources about the topics they are researching.
Without a doubt, this makes Wikipedia one of the most important research tools in the world. It’s the largest hand-curated annotated bibliography ever, and is one of the biggest referrers to scholarly publications and one of the biggest sources for readers of medical information. However, Wikipedia’s strengths sometimes hide its systematic gaps and failings—there are many pieces of information on Wikipedia that can’t be verified by a source, or are missing because of our community’s systemic biases.
The libraries community has a huge number of opportunities to help solve these gaps, from educating their patrons about how Wikipedia works to curating local cultural heritage knowledge.
Librarians are a diverse community, working with diverse patrons. However, there is one skill which every librarian has been trained in: helping answer research and reference questions. The skill of finding references for patrons and public researchers has great value to Wikipedia.
The Wikipedia Library, a program focused on improving Wikipedia’s research, is asking librarians all over the world to take 15 minutes to celebrate Wikipedia’s 15th birthday, by adding one more reference to Wikipedia. Join the campaign!
Every Wikipedia page needs more citations to authoritative sources to become a better starting point for researchers. We ask the library community,to take responsibility for these gaps and join in the campaign.
If you help organize a library coalition, network, or consortium, we invite you to sponsor this campaign by participating in our social media—using the hashtags #Wikipedia15 and #1Lib1Ref—and encouraging your members to participate!
You can learn more about engaging your library network.
Alex Stinson, Project Manager, The Wikipedia Library
Wikimedia Foundation

Editor’s note: this post was originally titled “#1Lib1Ref: Ask your librarians to take 15 minutes to celebrate Wikipedia’s 15th birthday” and dated to January 12.