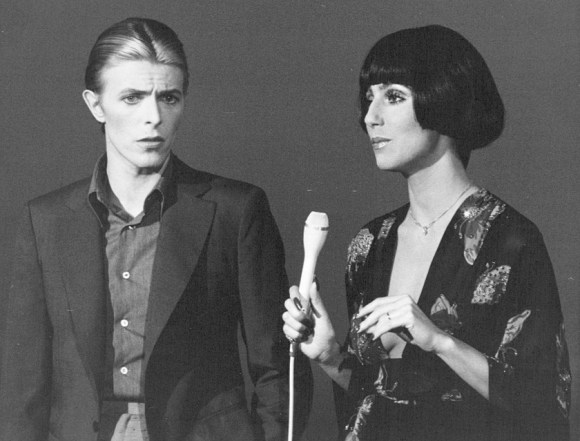 David Bowie, left, who released twenty-six studio albums during his lifetime, died earlier this month. Photo by CBS Television, public domain.
On January 10, just two days after the release of his twenty-sixth studio album, enigmatic British artist David Bowie died following an eighteen-month battle with liver cancer.
His death kicked off a string of deaths among aging male entertainers, including Alan Rickman, Glenn Frey, René Angélil, and Abe Vigoda—all but the last within six years of age from one another. All five followed Lemmy and Natalie Cole, both of whom died at the end of 2015.
Wikipedia’s page view statistics show that the site is the first stop for many when actors and entertainers pass away. Bowie received almost seven million views in the day after he died—over 185 times the number he had the day before. His article received another four million more hits over the next few days. Rickman peaked at almost 3.4 million after his own death.
Wikipedia’s weekly traffic report shows just how beloved these two entertainers are. Bowie was the most popular article for the time period, followed by Rickman. Bowie’s wife and son followed at numbers 3 and 5, respectively, and his first wife came in at number 10. The total number of views on Bowie’s article in the two weeks after his death—over twelve million when the second week’s stats are added in—would have been enough to put it on the list of Wikipedia’s top 25 most popular articles from the entire year of 2015. 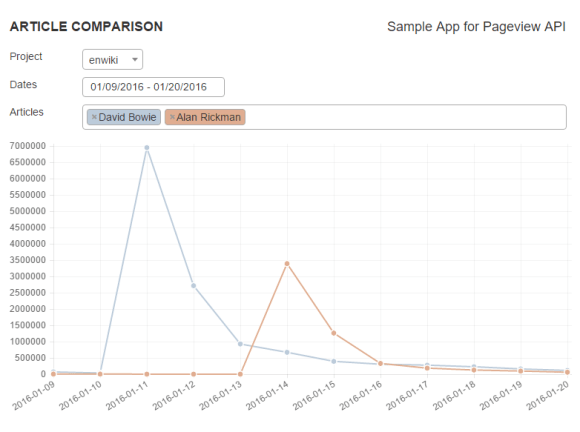 Graph created with the Wikimedia Foundation’s Sample App for Pageview API, freely licensed under CC BY-SA 3.0. You can read more about it in our December 2015 blog post, “Making our pageview data easily accessible.”
There is generally a huge uptick in interest in an entertainer following their death, both from people who may not be familiar with their work as well as those seeking confirmation and information on the circumstances. Having a fully-fleshed out article on both meant that Wikipedia already had a thorough overview of their lives, more detailed than the media might be able to put out on a short timeframe—especially Bowie’s “featured”-class article.
Even when it comes to updating, Wikipedia has an advantage in that it can be updated immediately by anyone at any time. Indeed, the article has been edited over a thousand times this month—about ten percent of its more than 10,000 edits since 2001.
Bowie’s disease was a tightly guarded secret, to the point that his death came as a big surprise. In particular, it gave new light to his final album, Blackstar—it was only afterwards that critics noted themes of death and mortality within the lyrics. These were most readily apparent in the music video for the single “Lazarus”, in which Bowie is pictured lying on a deathbed, bandage around his head, singing lyrics like “Look up here, I’m in heaven” and “Oh, I’ll be free; just like that bluebird”.
Bowie had been subjected to a number of death hoaxes in the months leading up to Blackstar‘s release, so when his official social media profiles announced his sudden passing, the information was treated with scepticism. For the most part, editors elected to wait for verified sources to confirm the accuracy of the information coming from social media; the edits were made permanent minutes after Bowie’s son, Duncan Jones, confirmed the news on Twitter: “Very sorry and sad to say it’s true, I’ll be offline for a while. Love to all.”
His Wikipedia article—identified as “featured“, peer-reviewed as one of the best articles on the site—provides a thorough overview of his life, his work, and his legacy. It now serves as a fitting obituary for a pioneering musician.
Articles on Wikipedia are unique in that they can turn from biographies to obituaries in only a few edits. The confirmation of Bowie’s death led to several editors making the changes necessary to the article in due course—generally small, but important, changes of tenses and article layout. 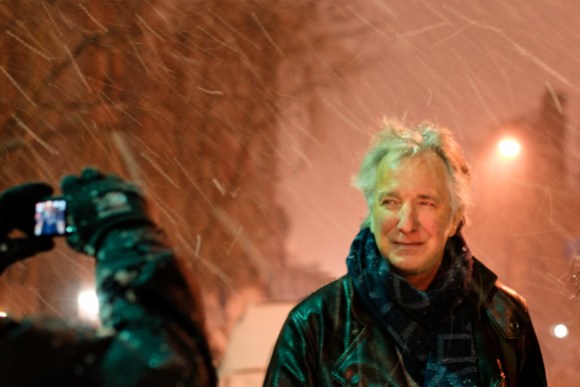 Alan Rickman died only four days after Bowie, at the same age. Photo by Marie-Lan Nguyen, freely licensed under CC BY-SA 3.0.
Four days later, we also lost Alan Rickman, an English actor and director who found fame in a number of roles across stage and screen from the 70s to the present day. He first found fame when he was nominated for a Tony Award in 1985 for his role in Les Liaisons dangereuses.
He earned more widespread and commercial success in his film roles, most notably playing Hans Gruber in Die Hard and Severus Snape in the eight-film Harry Potter series.
Both Bowie and Rickman were 69 when they died within days of each other, a curious coincidence compounded by the later deaths of Glenn Frey and Rene Angelil at a similar age.
Having a fully-fleshed out article on both meant that Wikipedia could provide a thorough overview of their lives, more detailed than the media might be able to put out on a short timeframe.
Joe Sutherland, Communications intern
Wikimedia Foundation