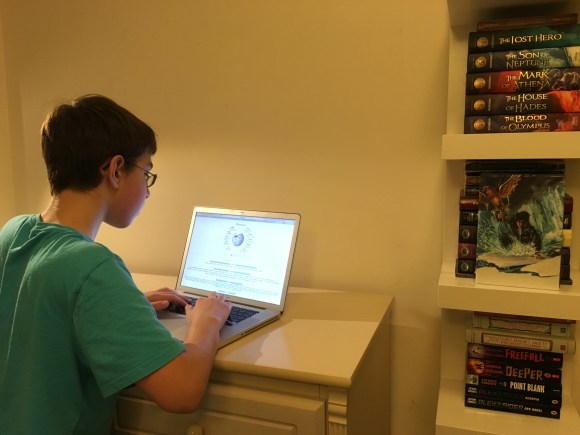 Photo by Tal Zussman, freely licensed under CC BY-SA 4.0.
In the last academic year, Tal Zussman was an eighth-grade student at HaNagid school in Herzliya, Israel. Along with all his classmates, Tal met Deror, a leading education volunteer and board member of Wikimedia Israel (WMIL), and participated in an article writing project. Tal chose to edit in the English language, under the username “Zussman1”.
We were happy to notice that Tal kept editing repeatedly, and kept doing so even after his family moved from Israel to the States and he turned fourteen. Recently, WMIL’s staff received a great update from Tal’s former teacher: in recognition of his contributions to the English Wikipedia, Tal received the English Wikipedia Editor of the Week award!
Tal agreed to answer a few questions for us.
Tell us about the program that you took part in.
Last year, during 8th grade, I participated in a Wikimedia Israel program for gifted students in my school, Hanagid, in Herzliya, Israel. My class went to the National Library in Jerusalem, where we received resources about topics that we wanted to create pages about in Wikipedia. Each student chose a topic that they wanted to write about. My first topic choice was to write about my grandfather, Yaacov Bleiman, who was an Israeli chess champion. An Admin of the Hebrew Wikipedia showed us a presentation about Wikipedia, how to edit pages in it, and the unique style of Wikipedia. Additionally, we had two editing workshops at school, in which we improved our articles and eventually submitted them for review.
How did you start editing Wikipedia in English?
I started editing Wikipedia in Hebrew while I participated in the program with my class in Israel, but because writing and reading are easier for me in English (I have lived in New York for nine years), I transitioned to editing in English.
How does editing Wikipedia benefit you?
Like most high school students, I use Wikipedia a lot. It’s a wonderful tool for the world and for students especially because they need information constantly. I enjoy knowing that my contributions help a massive number of people for free and also help bring up the overall quality of Wikipedia. It’s really awe-inspiring to know that every time someone goes into an article I edited, they see my contributions. Wikipedia is like a different world. The editing language is different, the protocol is different, there are unique ways of classifying users, and users use other names than in real life. Editing Wikipedia is like joining a different civilization, which is very enjoyable.
What do you write about?
I have joined multiple task forces in the English Wikipedia. Task forces are groups of people that edit articles about a specific topic. I participate in task forces that focus on topics that I am knowledgeable about. I am currently focusing on the Rick Riordan Task Force, but I am also in the Harry Potter, Star Wars, and Doctor Who task forces. I started joining task forces after I was invited to join the Percy Jackson Task Force (now the Rick Riordan Task Force) since I edited multiple articles under its scope. I mostly edit articles relating to these topics, but I also edit topics that don’t have task forces, such as book series. I also like writing and enjoy editing pages in general and pages that have typos or mistakes in them.
What challenges have you faced while editing?
Some challenges that I have faced while editing Wikipedia are new page rejections. I have submitted drafts of new pages three times, and every time they have been rejected. I am currently working on two drafts for the Rick Riordan Task Force, and my goal is to improve them to a high level so they will be accepted. The draft reviewers are very strict and they make sure that the articles are relevant, well referenced, and are written very well.
What advice would you give someone who would like to edit Wikipedia?
If you are interested in editing Wikipedia, the best thing to do when beginning is to focus on a specific topic that you know well and edit articles related to it. Another good idea is to choose an article, read over it, and fix any mistakes or make it clearer. In this way, you can learn the style of articles in Wikipedia, and your contributions will be more effective.
Recently, you received the Editor of the Week award. Why did you receive it?
An editor I had worked with in the Rick Riordan Task Force nominated me because he thought that I deserved recognition for my work. It happened after I have edited and improved a lot of articles in a specific topic. I have also uploaded images, undone vandalism, archived pages, and more. I think that this embodies the core value of Wikipedia: No matter whom you are or how old you are, you can edit and improve Wikipedia and be recognized for it.
Shai Katz, Education Coordinator
Wikimedia Israel

The program allows the students to participate in an active learning process, empowering them to contribute free high-quality content to the general public. The students acquire and practice information assessment, writing and research, critical thinking and digital skills that are expected to help them in the future. The feedback received from the students indicates that this is a significant and satisfying experience.

First OpenStreetMap chapter in the movement: Wikimedia Italy has announced that they are the first Wikimedia chapter to obtain a similar status with OpenStreetMap, an organization that aims ot have a freely licensed and editable map of the entire world. Simone Cortesi, the chairman of Wikimedia Italy and a long­time contributor to OpenStreetMap, writes that “the addition of the OpenStreetMap Foundation chapter for Italy as a Wikimedia chapter is very important. Wikipedia and OSM serve different purposes, but are governed by the same idea of contributing to the expansion of Free Knowledge: this way we can avoid wasting resources [by] bringing together two similar worlds.”
Mentoring program between the Argentine and Mexican chapters: Representatives from Wikimedia Argentina and Mexico met in Buenos Aires from January 25–29 in an effort to increase the impact of both Spanish language organizations. The Regional Mentoring Program, the first held as part of a larger Iberocoop initiative, particularly focused on how to translate these chapters’ successes into other regions. For Mexico, this was learning from Argentina’s educational programs; for Argentina, this was learning from Mexico’s GLAM collaborations. The two organizations write that the meeting was a “breakthrough in Wikimedia Argentina and Mexico’s programmatic relationships. These gains mean not only that we will work together to promote projects in the near future, but to understand the areas and fields of expertise of each chapter, to face our limits and failures, and generate best practices and learning patterns to enrich the movement.”
Wales opening up: Wikimedia UK has published a blog post from Robin Owain, a poet who released 150 of his poems onto the Internet in the 1990s and is now the chapter’s Wales manager. Says Owain, “The idea of sharing information and literature freely disappeared from the Welsh psyche in the 1980s. But it’s coming back, and coming fast. In the spring of 2015 BBC Wales released many articles to [the Welsh Wikipedia] and their text has been used on [the site]. This was a large and brave step, and surprisingly: the world did not end.”
Maithili Wikimedians moving forward with wiki in education: The Maithili Wikipedia Education Program is expanding to Rajbiraj in Eastern Nepal. Users there plan to “organize regional events for Wikipedians from all over the eastern part of Nepal and … engage students for workshops.” You can see their usergroup for more of their initiatives.
Spanish GLAMing:  On January 7, the GLAMing Madrid project ended. It was started in September 2015 as a collaboration with three state museums of Madrid—the Museum of Romanticism, the Museo del Traje (Costume Museum) and the National Archaeological Museum—with a Wikipedian in Residence. From organizer Rubén Ojeda:
In these four months, we carried out various activities to promote the Wikimedia projects, explain how Wikipedia works and generate content related to the three museums and their collections. We organized 18 Wikipedia workshops for the public, 6 for the staff of institutions and a triedit-a-thon. In all these events, 81 people participated, 61 women and 20 men. In terms of content, people at the workshops edited 114 articles, 64 of which were new, increasing information on Wikipedia, Wikidata and Wikiquote. We also put on an editing contest between December 14, 2015 and January 14, 2016 (GLAMing Madrid Challenge) which 30 people took part in, editing 373 articles in ten different languages.
Another highlight was the release of media under free license to Wikimedia Commons, in order to illustrate Wikimedia content. The National Archaeological Museum released 197 images, while the Museo del Traje followed with 58 and the Museum of Romanticism 122. We were also able to get 45 audio and video recordings of classical music concerts at the Museum of Romanticism.
From the Kurier: The German Wikipedia will enabling the VisualEditor for new and anonymous users after a community vote. Work by Wikimedia CH (Switzerland), in collaboration with the Swiss Federal Archive and Archives canto dimensional jurassiennes, has resulted in the uploading of 3,100 images from Eugène Cattin. Cattin worked in the timber business in Switzerland in the early part of the 20th century, and he took many photographs from 1900–30 of what is now the Canton of Jura.
New edition of RAW: The French Wikipedia’s RAW has now been published.
Ed Erhart, Editorial Associate
Wikimedia Foundation
We invite you to take part in putting this community digest together. This feature pulls together Wikimedia community news from around the globe to provide a venue for your updates and a diverse roundup of events. It aims to emulate and supplement already-existing community news outlets.
If your Wikimedia community has a milestone, cool new project, or quirky occurrence, please leave a message on our tip line, send me an email, or drop a message at my talk page.