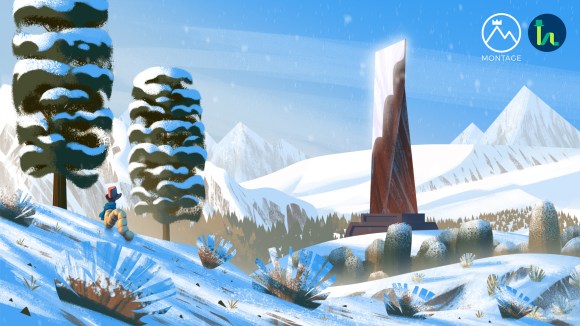 Imagine, for a moment, what it takes to organize a competition with a quarter of a million contestants. To make things more interesting, winners are selected from 40 different campaigns around the world, each with freedom to choose their own tools and design their own process . To top it off, do it year after year for the better part of a decade. Each year welcomes new people and new improvements to the processes.
If this sounds hard, then consider thanking your local Wiki Loves Monuments (WLM) volunteers. Thanks to the Commons community, 2016 just saw another successful iteration of the world’s largest photography competition. Every year, a distributed network of volunteers come together to organize Wiki Loves Monuments, the world’s largest photography competition. In 2016, these volunteers made the contest happen for the seventh year in 42 national competitions resulting in more than a quarter of a million photographs.
How do you build tools for this unconventional process while still keeping it flexible and open for organizers to decide how to run their competitions? This year, the international team of Wiki Loves Monuments (WLM) organizers set out to address this chicken-and-egg problem, with a little help from some volunteer work from Hatnote.
Today, we’re happy to present Montage, the web platform used to judge Wiki Loves Monuments 2016.

We started by looking at all the independent processes and tools used over the years. We wanted to make it easier than ever to organize a photography contest on Wikimedia Commons, and including communities who could not participate regularly. Before long, a new design emerged, one which would enable a standard recommended process, streamlined for future participants.
For those unfamiliar with the Wiki Loves Monuments competition, here is a handy executive summary:

Submissions and prizes may vary from year to year, but the contest has always achieved its goals:

It’s no wonder that Wiki Loves Monuments’ success has inspired many other “Wiki Loves” competitions, for all sorts of subjects, including nature, food, and folk culture.

Considering the unique processes of Wiki Loves Monuments, Montage had to be designed specifically for photo contests hosted on Wikimedia Commons. As with all good software, Montage puts its users first, so let’s start by taking a look at them.

We took a hard look at the WLM process and determined that we had to build functionality for the following groups of users:

Except for the public parts of the site, all users log in with their Wikimedia credentials.
Note that a person can take on more than one role, especially across campaigns. For instance, LilyOfTheWest coordinated Wiki Loves Monuments Iran, while also helping organize the international competition, and served as juror on a number of test rounds.
Each user role’s behavior in a nutshell:

So far, Montage has seen logins from over 200 users from all roles. Let’s take a peek into what their overall workflow looks like.

The smallest WLM2016 campaign on Montage ran with 760 entries, two rounds, and five jurors. Compare that to the largest campaigns, which had tens of thousands of entries, up to six rounds, and almost 50 jurors. We’ve worked hard to design Montage for contests of any size.
Once a campaign has been created in Montage, organizers import any number of entries into a first round of voting, then run successive rounds, one at a time, to narrow down the field to just the set of winning images.
Montage supports three voting styles, providing flexibility to organizers without too much complication for jurors:

A juror logging in, assigning ratings, editing ratings, and later ranking entries would see something like: 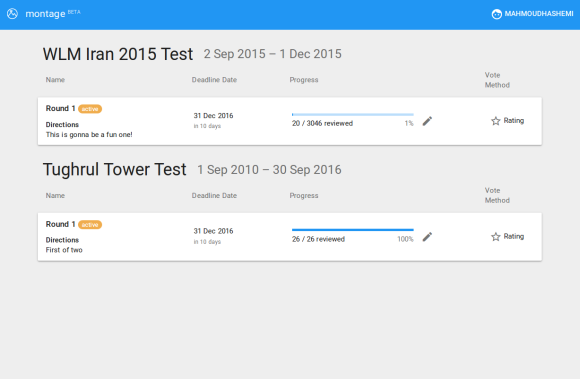 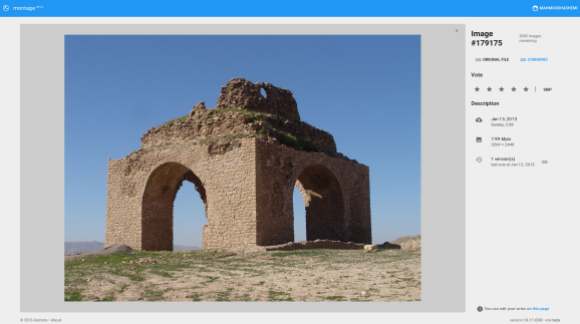 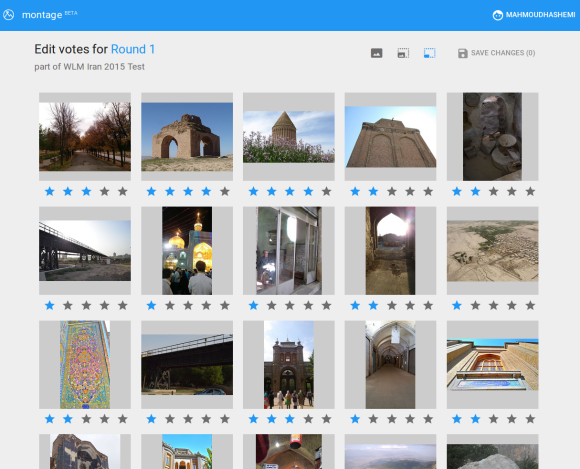 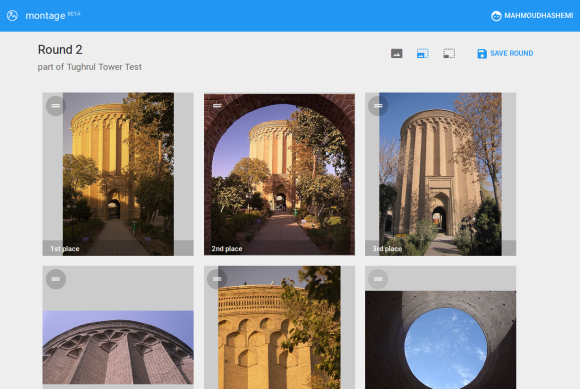 When a round’s voting is complete, organizers select the rating threshold to determine the set of entries advancing to the next round. Entries below the threshold are eliminated. Examples of thresholds would be:

Because organizers select the threshold value from a fixed set, as seen below, Montage sidesteps complicated tiebreaking logic. 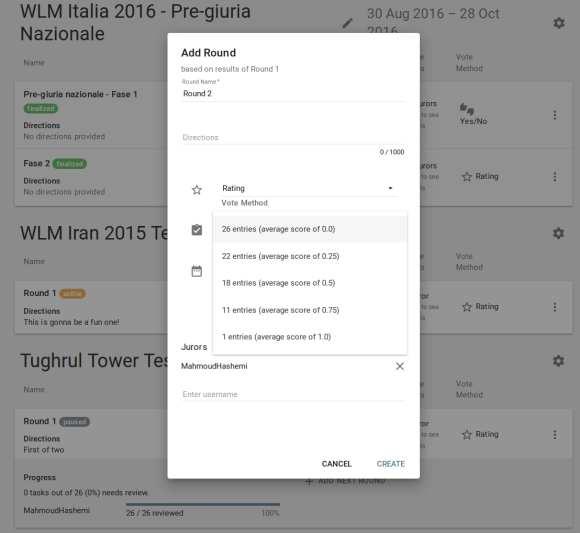 To lighten the load on individual jurors, while still ensuring each image gets a fair appraisal, Montage provides a quorum setting for yes-no and rating rounds. For example, in a rating round with quorum set to 3, each image must be rated by at least 3 randomly-selected jurors. This spreads the load for those early, large rounds.
For more in-depth detail about the research and design behind Montage’s voting system, see this post.

Montage also packs some notable technological advantages.
First off, Montage is hosted on Wikimedia’s community server, Tool Labs. This supported environment makes collaboration easier, while also providing critical features like automatic database backups, direct access to database replicas for faster imports, and HTTPS. The price is right, too!
As mentioned earlier, Montage also uses Wikimedia’s OAuth for authentication, meaning that user accounts are autocreated on first login, as long as they’re registered on Wikipedia, Commons, or some other Wikimedia wiki. This means users don’t need to remember another password, and the Montage team doesn’t need to worry about storing sensitive user information. Votes, permissions, and other information is still treated confidentially, of course.
Montage itself is built on Python, Werkzeug, and Clastic, giving it an added measure of maintainability. It has extensive logging throughout, using Lithoxyl. On the frontend, Angular.js provides a responsive user experience with a familiar feel.
The code is free and open to contributions and issue reports on GitHub, of course.

Without a doubt, Montage was much more of a success than we had anticipated. In the span of just a couple months, Montage has raised the bar for software support, while lowering the barriers for future coordination.
Right now we are putting together our feature list for the next iteration of Montage. The priorities are far from final, but some directions we are investigating include:

The list is long, and we’re excited to tackle it for the 2017 Wiki Loves contests! We hope you’ll join us. If you’re an engineer of any sort, get in touch!

Many people contributed to Montage directly and indirectly. To name a few:

And a huge thank you to all of the Montage users and Wiki Loves Monuments organizers and jurors. We couldn’t have done it without you!
We hope this peek behind the scenes of the contest has been enlightening. For more details and updates, feel free to watch the repo on GitHub, follow Hatnote on Twitter, and of course, watch/update/discuss via our Commons page. We look forward to hearing from you, and seeing your 2017 contest submissions!
Mahmoud Hashemi

All images and screenshots are courtesy of the Montage team. This post’s introduction has been rewritten after publication.