Dr. Olaf Simons works as a historian at the University of Erfurt’s Gotha Research Centre. He is the initiator of FactGrid, a database for historians. As a long-term Wikipedia editor, he grasped the potential of Wikibase for historical research early on.

Among the treasure trove of data he has recorded with Wikibase’s help is an extensive collection of data on the historical activities of the Illuminati in the eighteenth century, the fruit of years of research. We interviewed Dr. Simons on the current state of the project and its future prospects.

Lisa Dittmer and Jens Ohlig: First of all, congratulations on reaching the first step—you have just uploaded an extensive data trove for the first time. Could you tell us about the collection?

Dr. Olaf Simons: The first batch is the datasets for all of the known roughly 9,000 Illuminati files. I inherited different datasets from different people who had already collected material in Excel lists with an old access-database. Furthermore, we had already generated multiple tables of data in our old Illuminati-Wiki, which is still running. Those were all non-interlinked datasets however, and so I merged the five different Excel tables over the past half year. From there, I uploaded them to the database. That makes for just over 16,000 single datasets, of which ca. 9,000 link to documents, quite a few more, roughly 2,000 to publications, and further datasets about individuals, places and events—those are the groups.

Lisa and Jens: When you look for the term “Illuminati” on the internet, you quickly end up with conspiracy theories and pop culture, like novels by Dan Brown. Your engagement with the topic is scientific. It’s all about the historical order of the Illuminati then?

Olaf: Exactly, we talk about the Illuminati Order, which was active between 1778 and 1788 as a secret order that infiltrated the Freemasons from the top and created an impressive production of files in the meantime. Unfortunately, those files are largely lost today but we still have roughly 10,000 documents.

Here at the Research Centre Gotha a whole team of historians worked together on a project funded by the Deutsche Forschungsgemeinschaft (German Research Foundation); even before that, there were already research projects, the most important of which was the Reinhard Markner und Hermann Schüttler project at the IZEA Halle on the correspondence of the Illuminati, started after the opening of the records in the 1990s after the dissolution of the GDR.

The story of this source is almost worthy of a thriller. You can see that quite clearly looking at the pages from the „Schwedenkiste“—I documented its entire history and when you click your way through that, you arrive at single events, which you could in turn supply with documents. 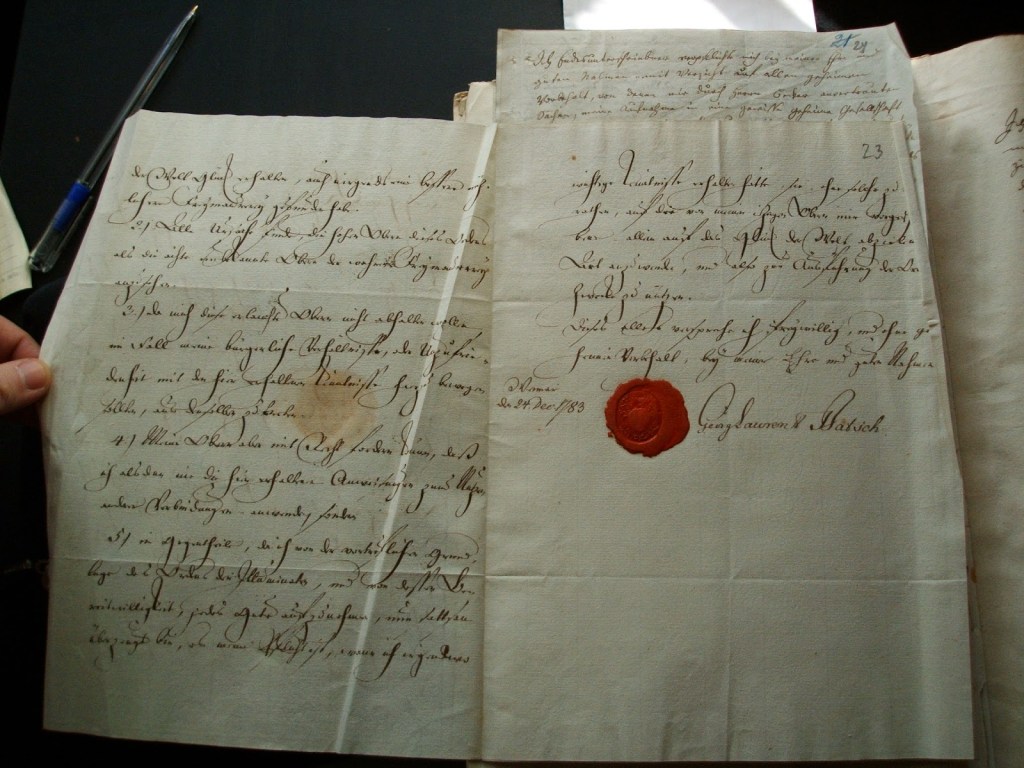 The documents basically show how the entire set of records was taken on by the Free Masons, how it was then confiscated by the Gestapo, captured by the Soviet Union at the end of war, then restituted to the GDR and finally returned to the Free Masons by the GDR. Today, 19 of 20 volumes are held by the Secret State Archives of the Prussian Cultural Heritage Foundation in Berlin; Volume 10 with the members’ list remains in Moscow. All of this is a mystery novel on the European map, on which you can now trace how these records moved around and only really surfaced in the 1990s.

Lisa and Jens: You have been a Wikipedian for quite some time, is that fair to say?

Olaf: Since 2004. So almost the first generation really… It seemed perfectly obvious to me to use the tools on hand from within the Wikimedia universe for my work as a historian. I set up a conventional wiki to begin to put the material from our small field of research in order. It was a shock for my colleagues at the start because I began to work completely transparently. The wiki was visible to everybody from day one. Everyone could see what I worked on and anyone could have stolen my work—that was the worry of my immediate colleagues. But the opposite happened: Everyone who works in that area suddenly wanted an account in that wiki because it was the only place where we could all work with the material together. So the wiki actually brought the researchers together rather than driving them apart.

One of the gravest issues of the Illuminati Wiki is that it is only available in German. The great interest in the Illuminati Order lies in the Anglophone area however; that is one of the reasons why we decided to set up a database using Wikibase software, because you can use it in every language.

Olaf: I knew about the developments since 2012. In 2016, Daniel Kinzler, Principal Platform Engineer at Wikimedia Deutschland, suggested using the Wikibase Software for our work when I mentioned the possibility of moving to Semantic Mediawiki. In April 2017, we went to Berlin to talk about the idea with Lydia Pintscher, the Wikidata Product Manager, and Daniel.

From there, we started a partnership with Wikimedia Deutschland under a common memorandum of understanding. In December 2017, we looked for the first freelance contractors, again with the support of WMDE.

A good friend of mine took on the actual installation of the software and it worked out perfectly. But as ever: the last 20% always make for 80% of the work—and you have to be on your guard against that. When we got to the tools for data uploads and queries, specifically Quick Statements and the Query Service, nothing worked, and we did not know why either. We finally understood that the tools all had Wikidata as a default baked in and were not communicating with our instance.

Lisa and Jens: Having trodden the difficult path of the pioneers, you have reached a first stage victory, i.e. you have the data that you wanted uploaded. Now something really big is next: the link to other forms of structured data, namely the Integrated Authority File or GND.

Olaf: Let’s see how that goes. We are really interested to incorporate those datasets. The production of a Wikidata-double is not actually that interesting but the GND-data would be an interesting alternative, which would suit our data records quite well. The software is suitable for many projects to draw on the database at the same time, so it’s more work creating the links than the creation of data items. That is where the idea to import the GND as a foundation comes from.

Our goal is to not limit ourselves to the Illuminati—that is why it’s not the “Illuminati database”, but the more neutral name FactGrid, in which the Illuminati files are a showcase.

I am currently working on a project relatively close to it, about Gotha as science location around the year 1800. I say it is close to it because the Illuminati Order had its last centre in Gotha und people were active in both spheres. I would rather not set up a second Wiki for the new project, and the database is well suited to have multiple different research projects run on the same platform. So far every research project opens up a new platform and its own database—on which the data eventually becomes obsolete with the software going out of date. That is the situation we want to leave behind. It only gets really exciting once different research projects interlink and other projects work with one’s own data—why not within the same resource?

Our project will focus on the early modern era to begin with, so 1500 bis 1850. A second department in Gotha works on globalization in the 19th Century based on collections of the Perthes publishing house. Should we succeed with the GND, we open up the resource for use on historical projects on a wider spectrum. The Wikibase software is suited like no other to facilitate such collaboration—that is where the trend leads, so we use the software and see which dynamics develop.

Lisa and Jens: And what kind of feedback did you receive from the science community?

Olaf: We have only recently reached the point that we have a full dataset collection available. There isn’t anything there yet to demonstrate. It is going to be exciting once I can showcase use cases and say: Look, that works. Then you can open up your own platform within the database for your research project and use other projects’ tools. Visualisations and specific material research are particularly interesting. At the moment we are working on the showcase, from there we will send out further invitations. At the Research Centre, colleagues are eagerly watching the project. If the project succeeds, they will join with their own projects, if not, they will have to look for more conventional solutions, with their own databases.

Lisa and Jens: What is most important for you now to take the next steps with your project?

Olaf: To be able to participate in the Community would be great. If especially people, who know Wikidata much better than I, say, “I know how to scan your records, how to research it”. It would be really helpful to get into an exchange because we know what data went into the database but we don’t really know yet how to make assumptions tangible within the database. Often your research is implicitly guided by a gut instinct, rough ideas what information is to be found and could be made visible. The enquiry of databases is a science of its own—at least for us.

We know for example how the Illuminati Order communicated (non-transparently with regards to the lower members, transparently for those at the top). The database knows far more about this than we do now. The issue is that we cannot draw that information from the database just yet. We can only really create queries as we put the data into the database but there are probably much more interesting queries that would tell us a lot more about the Order. That is something where one has to be creative, where it would be interesting to work with people who are experienced in the use of the software and have also already visualized research.

There is a lot in the database now. We just need some help from data enthusiasts now, who know how to ask SPARQL the right questions and which tools there are to make the knowledge in the documents visible.

Do you want to get involved and work with FactGrid as a data enthusiast or SPARQL expert? Get in touch with Olaf at olaf.simons@pierre-marteau.com.