It all started when the Dar AsSalam group introduced themselves to the Hebrew Wikipedia community. They offered to improve the content about Islam, Islamic culture, history and theology on the Hebrew Wikipedia. In their conversations with veteran Hebrew Wikipedia editors, the group mentioned their need for support, and they got some from Avner Avandrovic, veteran Hebrew Wikipedian and a member of the training staff at Wikimedia Israel. Avandrovic traveled to Kafr Qara in March 2018 to lead a Wikipedia editing workshop. Moderated by Bekriah S. Mawasi, the Arabic Education coordinator at Wikimedia Israel, the meetings took place in Dar AsSalam center, located inside the Nour al-Haq mosque in Kafr Qara.

Dar AsSalam center is an information center aiming at providing information about Islam to Muslims and to visitors from different backgrounds and religions. The main objective of the center is to print out and give away Islamic books promoting the values of tolerance, moderation, openness, modesty and spirituality. Understanding other religions, develops curiosity about Islam. Another goal is creating a space for mutual understanding between different cultures in Israel as a way to promote a shared life, peace and respect for each other’s culture. The center publishes books and pamphlets explaining Islam, in both Hebrew and Arabic, including translation of the meanings of the Holy Koran.

The editing course at Dar AsSalam included three meetings. Twelve Arabic speaking participants participated in the workshops and edited content in Hebrew. In addition to learning technical skills and editing the Hebrew Wikipedia, editors were introduced to the norms and policies of the Hebrew Wikipedia community and were encouraged to participate in discussions. They also learned about encyclopedic writing on religious topics. The group showed proficient understanding and full collaboration, and by the third meeting in August, they had written over 60 new articles and edited more than 150 other ones. The articles were diverse in content, ranging from books, theology, and profiles of distinguished religious and historical figures. The group created new categories too and the mentioned achievements were completed within one month. They look forward to continuing in the future.

Members of Dar AsSalam made prolific contributions to the Hebrew Wikipedia with references in English and Hebrew. Wikimedia Israel appreciates the commitment the group showed to free knowledge. Five of the group members joined the celebrations of the 15th anniversary of Hebrew Wikipedia which took place in Tel Aviv on 10 August 2018. Such collaborations are great opportunities to share diverse opinions within the Wikipedia communities and enhances collaborative content writing in the largest knowledge base.

GLAM activity kicks off in Indonesia with digitizing museum collections 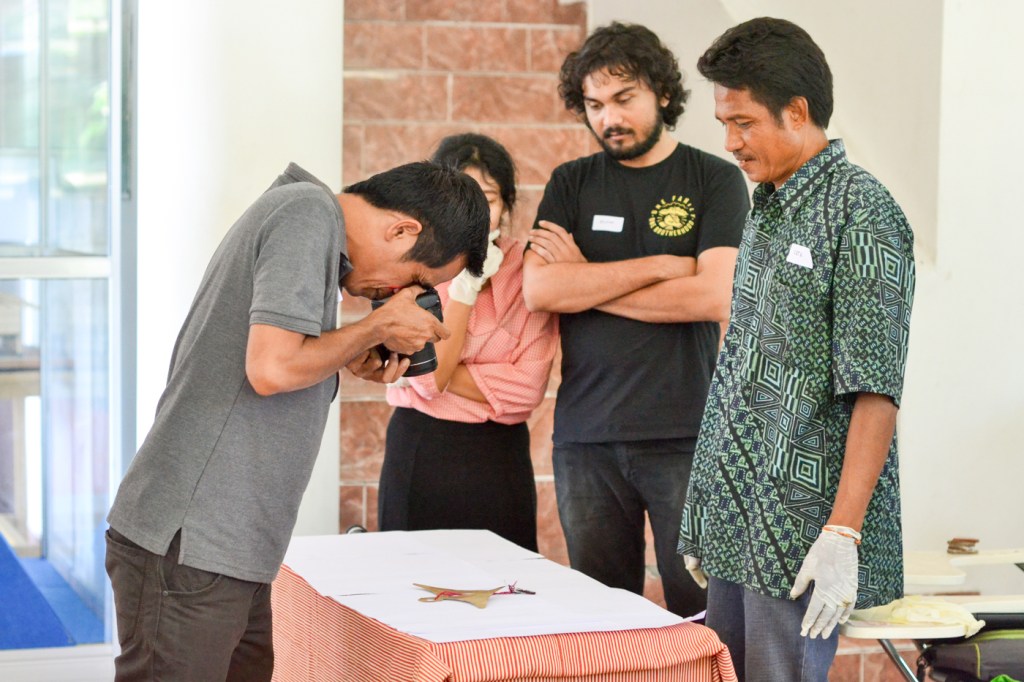 Due to policy issues, museums in Indonesia are not widely utilized in education and learning. There has been some progress in the governance of the cultural sector, particularly by passing the Law of Cultural Advancement No.5/2017 last year. However, the artists and art communities are by far noted as the primary parties making considerable contributions within the Indonesian art world.

Given this landscape, a new GLAM-Wiki project could make a major difference in people’s access to digital collections in the Indonesian GLAM sector.

On 30 and 31 May, Wikimedia Indonesia, together with Indonesian Arts Coalition, arranged a visit to Dr. H.C. Oemboe Hina Kapita Museum in Waingapu, East Nusa Tenggara. The museum allowed us to digitize their collection, which ranged from ceramic plates, ritual ceremony equipment, a few of traditional percussions, and of course, Sumbanese’s proud: Weft ikat, traditional pattern textile.

On the first day, we started a discussion with the participants about how museums can respond to the digital era by utilizing technology to engage with the public. It is as easy as maintaining the information through apps and social media or using multimedia. The audience included museum staff, art practitioners, indigenous people and officials from the Office of Culture, Tourism, Public Library and Archive.

Most locals can afford smartphones and frequently go online on social media. Thus, it is merely a matter of first; the lack of references on various internet platforms, and second; the lack of awareness about the internet. We are looking forward to doing some outreach work introducing Wikimedia Commons and Creative Commons licenses, in which they are embraced to be more active in sharing files which link to the local heritage they possess.

On the second day we held a session for the participants to try their hands on Wikimedia Commons. We invited the museum staff members to guide the participants while they look around and pick the objects which represented local culture to be digitized, and this was the interesting part. The section where ceramic plates stored became our first destination. It was nice to see that at this phase both the staff and the audience starting to discuss the objects, which are believed to have a strong relationship with the Chinese trading, exchanging information to each other whilst enriching the story behind it. For instance, there was new information on one of the plates found inside the cemetery in an archaeological site.

Over the two day event, we have successfully digitized and uploaded 18 images to Wikimedia Commons, including short descriptions about the objects.

“I could easily follow the instructions. There were no technical problems while working on Wikimedia Commons. I suppose we can do more to promote arts and culture in Sumba,” said Gusti Dida, a museum staff member who became a Wikimedia Commons contributor since then

The Sumba Museum, as it also is called, is the only museum in Waingapu, West Sumba, where the island is sometimes visited by local and foreign tourists because of its beautiful savanna, horse riding culture, and famous colorful weft ikat. The museum once temporarily closed and reopened in 2016, yet the collections are not well maintained. We were lucky to be invited by the Secretary of the Office of Culture and Tourism to hold this first GLAM activity in a local museum in Indonesia.

Indonesian art and culture in the digital landscape

Geographical and governance factors are the biggest challenges we are facing in building a digital environment for the Indonesian art and culture. Based on that, Wikimedia Indonesia is seeking to collaborate with local cultural institutions to digitize their archives as well as persuaded them to be the contributors to all kinds of Wikimedia platforms. Majalah Horison, one of the oldest Indonesian literature magazine and Majalah Kajawen, the Javanese magazine during colonial times are examples of the digitization projects that running ahead.

Now the museum staff of Dr. H.C Oemboe Hina Kapita Museum are able to produce and share knowledge by actively sharing their collection on Wikimedia Commons. At the end of the event, some participants were quite excited and offered the plan of making such follow-up activity in order to increase public attention towards the museum.

Any contribution on Wikimedia projects related to Indonesian art and culture could be seen as ways to building wider network and existence on the Internet, emphasizing the local’s possession of their own culture, their own narratives that complement the interpretation by others. 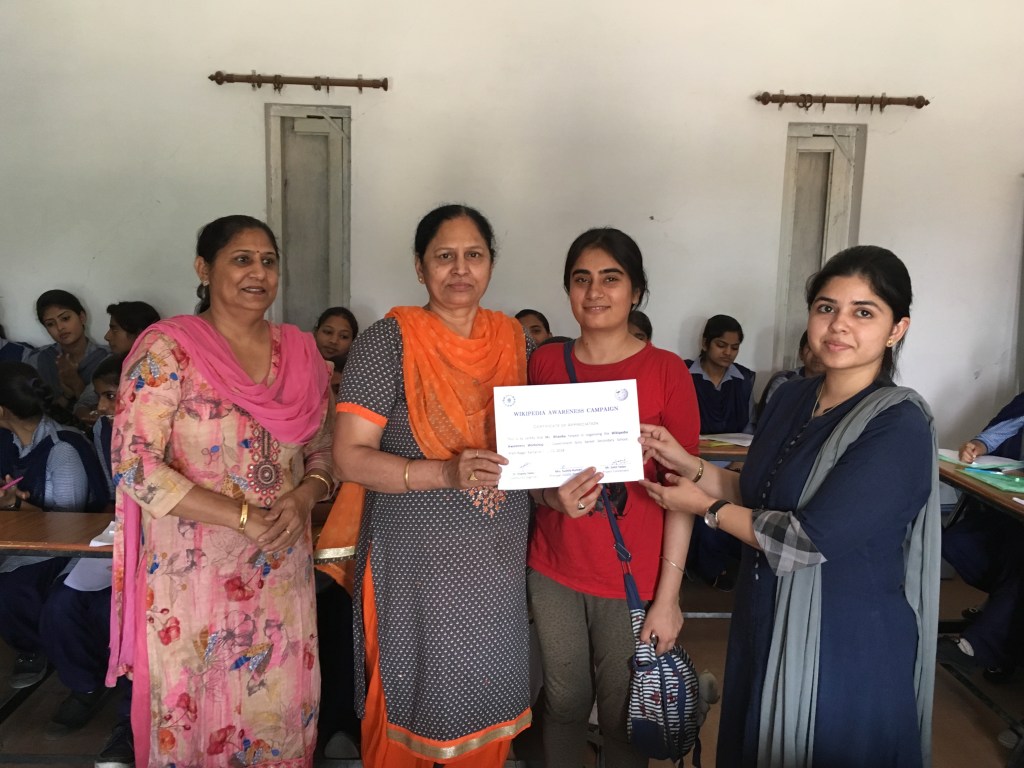 The Wikipedia Library names Shweta Yadav as their star coordinator for April to June: “In 2007 while still a school student, our teacher asked us not to prepare assignments using Wikipedia considering it a non-reliable source,” Shweta Yadav recalls. This was the beginning of Shweta’s curiosity towards Wikipedia and to understanding how it worked. Shweta further explained that even 10 years after these instructions, she become a culprit of the same criticisms as she found herself offering the same advice to her students. In an attempt to do what was right and to clear her conscience in teaching her students the right way to use an encyclopedia, she first participated in a 100 Wikidays challenge. She was introduced to the campaign by a colleague who got her editing. Through these efforts she discovered her curiosity was justified as the instructions given to her may have not been quite accurate.

Shweta gradually started outreach activities in Karnal to increase awareness amongst students and academics about her discovery, and her plight to completely detach the “unreliable tag” to Wikipedia led her to The Wikipedia Library Program (TWL). She volunteered to become the coordinator for the Hindi Branch. “As a researcher I knew how knowledgeable a well-referenced article could be and that the availability of resources will attract good editors and increase quality of content.” Her thoughts on how crucial well-referenced articles are to Wikipedia led her to the creation of the first branch in India, the Hindi TWL Branch.

Call for volunteers to join the Wikimedia Ombudsman Commission: The Ombudsman Commission investigates complaints about infringements of the Privacy Policy, the Access to nonpublic information policy, the CheckUser policy and the oversight policy on any Wikimedia project for the Board of Trustees. They also investigate for the Board the compliance of local CheckUser or Oversight policies or guidelines with the global CheckUser and Oversight policies. The Commission is calling for new volunteers to join. More information and how to apply on Wikimedia-l.

Call for proposals to host Wikimania 2020: The Wikimania Steering Committee and Wikimedia Foundation are seeking expressions of interest from interested parties for hosting Wikimania 2020. More information can be found on Meta-Wiki.

The Wikipedia and Education user group board election results are announced: The Wikipedia & Education user group aims at to enhance and scale local and global educational efforts, advocate for education within the Wikimedia movement, and elevate the narrative of education outside our movement. Last week, the first board election results were announced and the board member names were shared on Wikimedia-l.

Punjabi Wikimedians hold a Wiki Loves Food editathon: Punjabi Wikimedians is organizing a Wiki Loves Food edit-a-thon which is happening in collaboration with the World Heritage Cuisine Summit & Food Festival 2018. The organizers are inviting Wikimedians to join hands with them to take part in the international contest to create content about food items in respective languages. These articles will be presented in the form of QR Codes at the World Heritage Cuisine Summit 2018 to be held in Amritsar, Punjab, India. More information about the contest is on Meta-Wiki.