That’s what a recent global brand study sought to research as part of the Wikimedia movement’s planning towards our ambitious 2030 strategic goals. The study was led by Wolff Olins, an international brand consultancy, and directed by the Wikimedia Foundation’s Communications department.

The results showed high support for Wikimedia’s mission and strong interest in contributing to Wikimedia projects. There was only one problem: almost no one surveyed understood what Wikimedia actually means.

Among the world’s internet users, Wikipedia enjoys a remarkably high level of awareness. In Spain, 89% of internet users report having “heard” of Wikipedia. Rates remain above 80% across North America and Western Europe. Even in emerging markets, where Wikipedia has had to make concerted efforts to market itself, awareness averages above 40% and is fast growing. A single brand campaign in Nigeria, for instance, raised Wikipedia awareness from 27% to 48% in 2018. 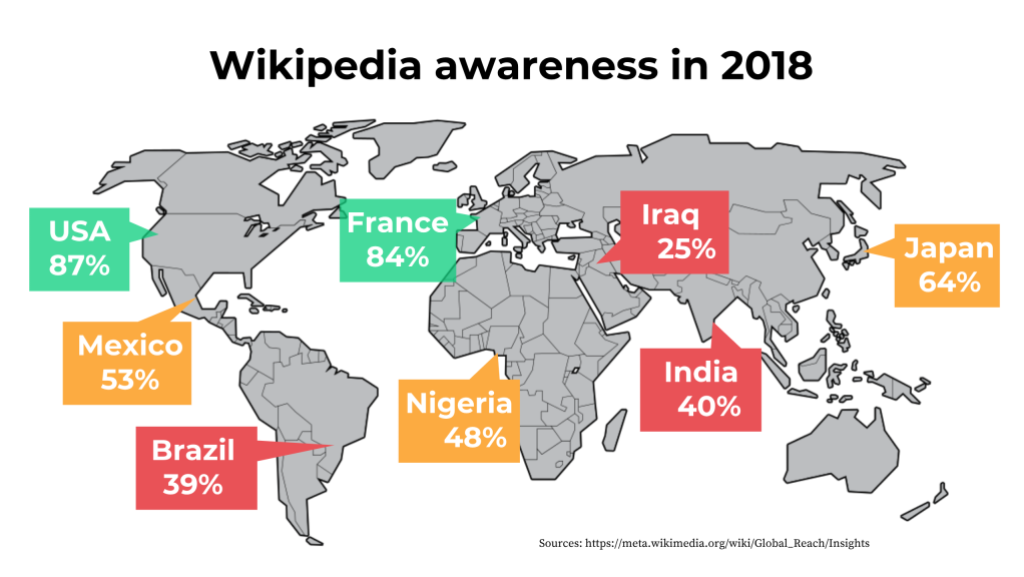 By contrast, Wikimedia is not well understood and is often confused with Wikipedia. In this recent study, respondents reported that they had “never heard of [Wikimedia] before.” When asked to guess what it might be, many responded with Wikipedia.

“It is the same content as in Wikipedia, but we can find the information presented in videos or podcasts,” suggested a respondent from Mexico.

A respondent in Germany offered a similar definition. “Similar to Wikipedia, but mainly a collection of videos and photos.”

As part of the study, survey participants were asked if they recognized the names of Wikimedia projects. The results showed almost no familiarity with Meta-Wiki, Wikivoyage, and Wikispecies. But a surprisingly high number of respondents said they “had heard” of projects like Wikiquote, Wikibooks, and Wikinews. The researchers noted that some of this could be false familiarity caused by recognizing the common nouns (“book” and “news”) and guessing they know/understood the project

Study participants said that not fully understanding the Wikipedia content model prevented them from acting on their impulse to share content. Some even felt that the global reach of Wikipedia was intimidating and raised the stakes of adding content.

“I think I need more knowledge,” said a respondent in India, “because it is something read in every corner of the world so I really don’t want to go wrong in any way,”

The view from China

Study responses from China, where Wikipedia is blocked in Mandarin, were remarkably similar to responses from the other regions. Respondents said they were generally interested in reading and contributing to Wikipedia, but also highlighted that they find similar knowledge and editing opportunities on Baidu Baidu.

“Information on Baidu is very comprehensive” said one respondent. “It is a free and multilingual online encyclopedia.” Another said much the same: “Baidu Search and Baidu Baike are also free encyclopedias that everyone can edit. … It also supports many languages with massive traffic.”

One observation unique to Chinese internet users is the association between the word “wiki” and encyclopedias in general. Several respondents did not recall “Wikipedia” as the full name, but used “wiki” instead.

Worldwide, it is Wikipedia that general internet users recognize, not Wikimedia. In China, the Wikipedia brand still enjoys considerable familiarity even though the site has been blocked in the country since 2015. At more than 80% awareness in the North Atlantic, and fast growing awareness in emerging markets, the Wikipedia name offers our movement a powerful tool for supporting the 2030 goals. With this information in hand, we’re exploring how we might use that tool, and we’d welcome your input at brandproject[at]wikimedia.org.