Video of the monthly Wikimedia Foundation metrics and activities meeting covering the month of January (February 2, 2012)

On January 18, the community of the English Wikipedia made history with its decision to black out its entire project for 24 hours in protest of two proposed US laws — SOPA and PIPA — that would have seriously damaged the free and open Internet, including Wikipedia. The communities of over 30 other Wikimedia projects supported the protest. Many Foundation staff assisted in the effort, handling the technical side of the blackout as requested by the community, providing code and design, facilitating discussions, contributing legal analysis and handling an unprecedented amount of press coverage.
During the blackout, more than eight million US-based readers used the CongressLookup tool to find their political representatives. A blog post by Sue Gardner received more than 13,000 comments, with the overwhelming majority supporting the blackout. Google News listed over 11,000 media stories about the Wikipedia blackout and the other Internet protests of January 18, and #wikipediablackout was tweeted almost 1 million times. Support for both SOPA and PIPA has since dwindled. Observers expect that they will not become law in their proposed form.

Participants at the San Francisco Hackathon

The first San Francisco Hackathon was attended by 92 participants, many of them complete newcomers. They attended training sessions about Wikimedia technology, followed by team work on demo projects which were then presented in a showcase session and judged by a jury. The first prize went to “SMSpedia”, which allows the user to text a page title to a phone number; the user is then called back by the service and can listen to the Wikipedia entry read aloud.

In the first partnership of its kind, mobile operator Orange and the Wikimedia Foundation will provide more than 70 million Orange customers from 20 countries in Africa and the Middle East (AMEA) with mobile access to Wikipedia — without incurring data usage charges. Also in January, the official Wikipedia Android app was announced. It was installed more than half a million times within the first two weeks.

A detailed report of the Tech Department’s activities for January 2012 can be found at:

Major news in January include: 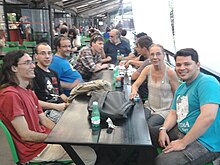 The Wikipedia blackout is January 2012’s standout story, possibly the story of the year for WMF and Wikipedia, and maybe the most important story in our history. The days before and after January 18, 2012 were almost exclusively focused on supporting WMF’s work around the community mandate to bring about a blackout, including consulting on messaging, design, implementation, community outreach and media relations. January also saw the cap-off of our most successful fundraising campaign ever, and saw the introduction of Matthew Roth to the Communications team as Manager, Global Communications.

The English Wikipedia as seen by readers during the blackout

Undoubtedly one of the biggest stories in the US and the world in January 2012 was the Internet protests on January 18, which largely centered around the Wikipedia community decision to blackout English Wikipedia internationally for one day. Aside from publishing three separate press releases leading up to and after the blackout, the Communications team worked closely with Jimmy Wales on both advance press interviews and a deluge of interview requests the week of January 16.
In total, WMF responded to over 260 separate media inquiries from around the world. News.google.com reports over 11,000 media stories on the topic of our blackout and the Internet protests, many of which focused primarily on Wikipedia. Jimmy Wales had over a dozen television appearances, effectively positioning the blackout story as the leading story around the world on January 18. Major newswire stories were syndicated interntaionally and in dozens of languages.
Social media activity around the blackout was extraordinary. Users followed the CongressLookup system and tweeted their Representatives to urge action around SOPA/PIPA. #WikipediaBlackout and #SOPA were trending topics for the day. #wikipediablackout was tweeted almost 1 million times, and SOPA was mentioned 2.3 million times.
Media interest continued well after the week of January 16 and Communications continues to support inquiries. We’re also working on a series of feature stories about the blackout in major magazines and placed OpEd stories in either the New York Times or Washington Post.
Wikimedia’s global network of chapters also fielded dozens of requests in their own regions and languages, further augmenting the world-wide footprint of the blackout. Media coverage was largely positive and supportive of the efforts of Wikipedia’s community. The bill supporters have since withdrawn both SOPA and PIPA, shelving them indefinitely, based largely on a historic level of constituent reaction and Congressional contact in the US.
Meta-wiki consolidation of the major coverage:

(and great quotes about the blackout)

WMF returned to one of its early business partners in January, announcing a major partnership to make Wikipedia available at no charge to mobile subscribers in dozens of their territories throughout Africa and the Middle East. This was the first major partnership announced regarding WMF’s efforts to dramatically increase access to Wikipedia through mobile channels around the world. Coverage was largely positive and supportive of the effort.

Orange and the Wikimedia Foundation partner to offer Wikipedia in Africa and the Middle East at no extra cost, 24 January 2012

Statement from the Wikimedia Foundation regarding developments in Washington on SOPA and PIPA, 20 January 2012

Joady Lohr has joined us as the new Director of Human Resources. Joady handles aspects of human resources related to compensation, benefits, policies, etc. and is already an indispensible part of our team. She comes to us with years of experience at IDEO and Business for Social Responsibility (BSR), both of which speak to her experiences working in HR with global organizations.
In recruiting, we are iterating changes to http://jobs.wikimedia.org , and hosting a focus group with community members to ensure that the page communicates that we welcome community members applying for roles with the Foundation. Feedback on the page is welcome. We are also rolling out Jobvite as our recruitment and applicant tracking software to streamline our recruiting process.
We have also begun redesigning some of our internal processes, such as onboarding and hiring, including a revision of our hiring contracts and agreements with heavy and wonderful support from Legal.
Real-time feed for HR updates: http://identi.ca/wikimediaatwork or http://twitter.com/wikimediaatwork

Chip Deubner joined our Office IT team and Nathan D’Annibale joined our accounting team.
We are continuing our search for a Head of Office Administration and will begin interviews next week.
Work was completed on an update to conference room R 33 to improve its usability for the Tech team. Our thanks to Leslie for facilitating this project.