Video of the monthly Wikimedia Foundation metrics and activities meeting covering the month of December (January 10, 2013)

79,532 (-0.03% compared with October / +0.59% compared with the previous year)
(Database data, all Wikimedia Foundation projects. Note: We recently refined this metric to take into account Wikimedia Commons and activity across several projects.)

An alpha version of the VisualEditor, the upcoming rich-text interface which will make it easier to edit wiki pages, was enabled on the English Wikipedia in December. Experienced editors can now test it and provide feedback on problem and priorities.

“The Impact Of Wikipedia” (video produced for the fundraiser, with subtitles in various languages)

Record donations in shortest ever fundraiser

The fundraising team reached their end-of-year goal of US $25 million early this year, making 2012 the shortest fundraiser to date. We also had a record-breaking total number of contributions: 1.484 million donations since July 1. The campaign ended with a “Thank You” banner that introduced readers to a diverse group of editors through written messages and video interviews. About half a million people watched a four-minute video introduction to Wikipedia editors and we saw an increase in account creation.

First round of the new funds dissemination process ends

The Wikimedia Foundation’s Board of Trustees approved the recommendations of the Funds Dissemination Committee (FDC), allocating $8.43 million to 11 Wikimedia organizations. This marked the successful conclusion of the first round of the new FDC process. This change in how money is distributed within the Wikimedia movement was described by Trustees Jan-Bart de Vreede and Patricio Lorente as “a significant devolution of power to the global volunteer community of Wikimedians”. The committee was formed earlier in 2012 and consists of seven volunteers from seven different countries, who have editing experience on several Wikimedia projects, and have founded or have been Board members of five Wikimedia chapters.

A detailed report of the Tech Department’s activities for December 2012 can be found at:

In December, the VisualEditor team enabled on the English Wikipedia an alpha version of the VisualEditor (see also general “Highlights” section). The VisualEditor team focused on ensuring that it worked properly, on providing a dedicated tool to report problems with editing, and on addressing the reports and ideas from editors after deployment.
This successful release was also a major milestone for Parsoid (the parsing program that translates plain wikitext into HTML annotated for easy editing, and vice-versa). Parsoid needs to handle the full range of arbitrary and complex existing wiki content, including templates, tables and extensions; it did so very well, as witnessed by the lack of mistakes introduced by Parsoid in the wikitext. This was in large part due to the team’s efforts on automated conversion testing and the completion of a strategy to only convert the parts of the page what were edited (“selective serialization”).

This month, the Editor engagement team (E2) continued to develop new features of the Notifications project (called “Echo”), and enabled a first experimental release on mediawiki.org. They worked on feature requirements, the user experience and developed interface and behind-the-scenes components. More features will be developed in January that are planned to be enabled on the English Wikipedia in early 2013. Help is welcome to test these features to provide feedback and find bugs. (see also: Presentation slides from the metrics meeting for December)

A research study on the use of the Article Feedback (AFT) tool on the English Wikipedia confirmed that many readers use this quality assessment feature, and a sizable number of them go on to register and become editors. Based on that research and other suggestions, new features were started to reduce the editor workload through better filters and simpler moderation tools. The activation of Article Feedback on all articles of the English Wikipedia is planned for March 2013. Some wikis like the German Wikipedia have started to evaluate this tool as well, while others like the French Wikipedia are discussing it.
No significant development activity happened on Page Curation (an interface for experienced contributors to review and improve newly created pages) following its release on the English Wikipedia, but its localization and adaptation for possible use on other wikis and in other languages is currently under consideration.
In December, the Editor engagement experiments team (E3) launched a new test aimed at Onboarding new Wikipedians; it offers an optimized task list immediately after sign up, inviting those without an idea of how to get started to choose an article and try their hand at editing. Development continued on the new account creation experience and a Guided Tours feature that which will be launched in January 2013.
To support these and future experiments, the EventLogging tool underwent heavy development, including the launch of a dedicated space on meta-wiki for defining the data collected in a public, collaborative manner. Development of a user metrics interface for programs also begun in order to standardize user metrics, and provide infrastructure and access to them.
Last, the E3 team collaborated with the Fundraising team to reach out to donors and readers as part of the annual fundraising campaign, via email and a “Thank You” banner which ran at the end of the year.

The Mobile development and design team worked on finalizing contributory and other experimental editor-focused features on the Beta site (uploads, editing, and watchlist functionality) in order to clear the way for mobile uploads by March 2013. They also worked to improve the reader and potential editor experience by introducing features geared toward educating and engaging users, such as a human-readable last-modified indicator for articles and watchlists, and thumbnail images to illustrate the watchlist view. Because of the huge interest generated in the Beta testing site, an Alpha site was created to house very early work on contributory features without disrupting the reading experience of the 100,000+ Beta users.
Work continued on GeoData, a tool to store and retrieve GPS coordinates in Wikimedia databases, and it was deployed to all Wikipedia and Wikivoyage sites; it is expected to become officially operational shortly. This tool is a cornerstone of the discovery feature for the mobile site, allowing users to read about places around them.
Orange Congo joined the list of mobile carriers who enable free mobile access to Wikipedia via the Wikipedia Zero program. The Wikipedia Zero team resolved operational issues and continued to work on more partnerships. Two other initiatives to bring Wikipedia to mobile devices, the Wikipedia S40 J2ME app and the USSD service, are now ready to launch pending contractual negotiations with carriers.
Last, the Mobile quality assurance team started to work on an upcoming community testing event for Mobile features, and support for the MobileFrontend extension in the Beta cluster testing environment. 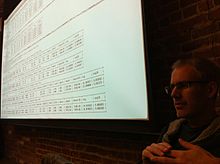 Zack Exley thinking under a large set of testing data during the 2012 Wikimedia Fundraiser. The team did more than 100 live A-B tests in December.

No requests approved or reports accepted in December 2012.

The application process is expected to start in mid-January.

Ongoing development of courses that were selected but affected by a national strike:

Finalized 6 courses of the Education Program: 4 with good articles and contributions (about 80% of the content has already moved to or developed in the main domain of the Portuguese Wikipedia), and 2 under review. More than 60 articles have been produced. 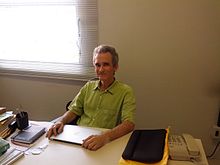 Education Program kicks off in Sweden

A Wikipedia wall at a teachers’ conference in Sweden.

Sophie Österberg, the education manager for Wikimedia Sverige, has written a detailed update on the kick-off of the Wikipedia Education Program in Sweden. She and the rest of the team in Sweden have been meeting with instructors and institutions to determine the best ways of working Wikipedia into the curriculum in Sweden. Wikimedia Sverige has also produced T-shirts and brochures for the program, and they’re excited about the results so far: many instructors have expressed interest in being part of the program, and they’ve started to build relationships. Learn more about the Swedish education program’s activities.

Professor Yuri Leite of the Universidade Federal do Espírito Santo in Vitória, Brazil, has been using Wikipedia in his courses since 2009, when he taught a class on the Charles Darwin book “The Origin of Species” and had his students update the article on the book on the Portuguese Wikipedia as he went along. Now, his students have contributed to improving the information on evolution available on the Portuguese Wikipedia for several terms, and Yuri looks forward to continuing to grow the available articles. Read more about his motivations for doing the project.

Professors and Ambassadors who worked with students in the United States and Canada program in 2012 have added a series of links to the new Trophy Case, which highlights the best student work. The Trophy Case includes categories for articles that were featured on the English Wikipedia’s main page in the Did You Know section, those that have achieved Good Article status, high quality new articles, significantly expanded existing articles, and non-textual contributions. See the Trophy Case, and add other student work you see to it.

Studenti píší Wikipedii is a brochure developed by Wikimedia Czech Republic for their education program, one of the brochures featured on the new page.

A centralized repository of information for participants in the Wikipedia Education Program worldwide has been created on the outreach wiki’s education portal. Broken down into information by target audience, such as instructors and students, the page contains links to brochures, handouts, and videos available in multiple languages. Handouts created specifically for Wikipedia Education Program participants in any language are welcome. See the page.

In December on the celebratory front, HR hosted an annual holiday party and organized a group excursion to watch “The Hobbit” movie. We kicked off a Remote Employee Experience Task Force to improve the experience of people who work remotely. We also hosted open enrollment for staff to change their health plan benefits.

In December 2012, the Legal and Community Advocacy team presented a draft of the first conflict of interest guidelines to Meta for community comment and feedback. LCA also finalized standardized grant agreements for the FDC organizations and continued to provide guidance regarding Thematic Organizations.

In December the communications team formally launched the 2011-12 WMF Annual Report, as a print product and in a wiki/PDF version. Further work on translations and production of localized editions will continue through January. In December we also announced the winners of the 2012 Wiki Loves Monuments global contest and issued a release celebrating the conclusion of our recent successful online fundraiser.
Communications also supported WMF ED Sue Gardner during a series of media interviews and panel discussions in New York, focusing on the fundraiser, Wikipedia Zero, and diversifying and growing our community of contributors.

The Foundation’s most successful fundraiser ever got strong coverage in late December around the announcement that marked the shift from fundraising to a highly-visible ‘thank you’ campaign. This year’s coverage also included unexpected news of a $70K donation from US based ‘Cards against humanity’ which offered a video appreciation of Wikipedia.

End of year lists grab on to Wikipedia (December 27-30)

Annual end-of-year media coverage on 2012 lists included a popular list of most-viewed articles in Wikipedia, based on results from a toolserver app by Johan Gunnarsson. The list generated a lot of speculation about how certain articles rose above others, including the curious inclusion of the German article for ‘Sackgasse’ (cul de sac) topping the German Wikipedia list.

(Numerous posts through December profiled the incredible selections from last year’s Wiki Loves Monuments photo contest, some of the most amazing freely licensed photographs on the Internet) https://diff.wikimedia.org/c/community/wiki-loves-monuments/

For lots of detailed coverage and news summaries, see the community-edited newsletter “Wikipedia Signpost” for December 2012:

Visitors and guests to the WMF office in December 2012: