Video of the monthly Wikimedia Foundation metrics and activities meeting covering the month of March (April 3, 2014)

(Financial information is only available through February 2014 at the time of this report.)

All financial information presented is for the Month-To-Date and Year-To-Date February 28, 2014. 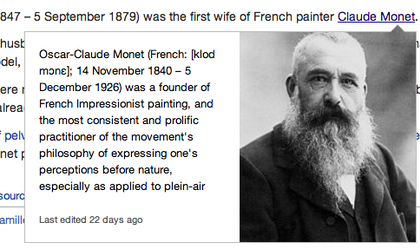 Screenshot of a Hovercard (a preview of the article en:Claude Monet displayed in en:Camille Doncieux)

Hovercards are brief previews of a Wikipedia article or other wiki page, displayed when the reader hovers over a link to that page. The preview consists of the lead paragraph and first image of the article. Users can enable this feature by logging into their account and clicking the “Beta” link at the top right. Hovercards were inspired by the Navigation popups gadget used by many experienced Wikimedians on the English Wikipedia and elsewhere, and modify the idea to make it more suitable for casual readers.

Typography refresh: A new look for text on Wikimedia sites

At the end of March, an update to the typography on the desktop version of Wikimedia sites was announced. The typography refresh is based on four requirements: 1. Readability, 2. a consistent look across multiple devices, 3. availability of the typefaces across various platforms (Mac OS X, Windows, Linux, and mobile operating systems), and 4. accessibility (even for those readers with visual impairments).

The most visible change is that headings are now displayed in a serif font instead of a sans-serif font. Among the other modifications: The text color is now a very dark grey instead of pure black, while the background color remained pure white. Also, the body font size was increased.

The changes were scheduled to be rolled out in April, with adjustments based on user feedback. 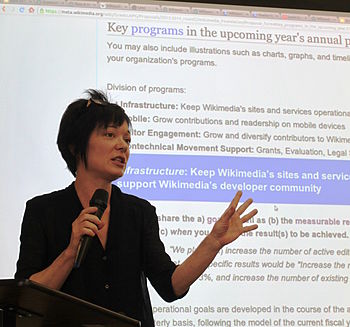 In March, the Foundation worked to prepare its 2014/15 annual plan for publication in draft form, as a proposal to the FDC (Funds Dissemination Committee). The feedback from the FDC and the community review period (April 1 to April 30) will be taken into account while the plan is being finalized. As part of the FDC proposal, the Foundation published a new comprehensive overview of ongoing, long-term work that WMF staff and contractors are carrying out in support of the Wikimedia projects.

A detailed report of the Tech Department’s activities for March 2014 can be found at:

Major news in March include:

In March, the VisualEditor team continued their work on improving the stability and performance of this visual tool to edit wiki pages. They also added some new features and simplifications, helping users edit and create pages more swiftly and easily. Editing templates is now much simpler, moving most of the advanced controls that users don’t often need into a special version of that window. The media dialog was improved and stream-lined to make it clearer what the controls are for. The overall design of dialogs and controls was improved to make it flow better, like double-clicking a block to open its dialog. A new system for quickly and simply inserting and editing “citations” (references based on templates) neared completion and will be enabled in the coming month.

The Parsoid team continued with a lot of bug fixing and tweaking of this parsing program that converts wikitext to annotated HTML, behind the scenes of VisualEditor. Media and image handling in particular was improved. In the process, we discovered a lot of edge cases and inconsistent behavior in the PHP parser, and fixed some of those issues there as well.

We revamped our round-trip test server interface that compares the wikitext code of a page before and after it’s been converted into annotated HTML, and back into wikitext. We fixed some issues in the round-trip test system, and improved our error logging system.

We also designed and implemented a HTML templating library which combines correctness, security and performance. This will notably be used to evaluate HTML templating for translation messages and eventually wiki content.

Presentation slides from the Growth team

This month the Core Features team focused on improvements to how the new Flow discussion system works with key MediaWiki tools and processes. We made changes to the history, watchlist, and recent changes views, adding more context and bringing them more in line with what experienced users expect from these features. We released a thank feature in Flow, allowing users to thank each other for posts, and began work on a feature to close and summarize discussions. Lastly, we continued work on rewriting the Flow interface to make it cleaner, faster, and more responsive across a wide number of browsers/devices.

In March, the Growth team primarily focused on bug fixing, design enhancements, and refactoring of the GettingStarted and GuidedTour extensions, which were recently launched on 30 Wikipedias. We updated icons and button styles, rewrote the interface text, and refactored the interface to be more usable in non-English languages. We also began to refactor of the GuidedTour API, in order to support interactive tours that are non-linear. Non-linear tours will not depend on a page load to run, which will notably enable better support for tours in VisualEditor. Last but not least, we made progress on measuring the impact of GettingStarted across all wikis where it is deployed, with results for the first 30 days of editor activity expected in early April.

The Wikimedia Apps team worked on logged-out editing to logged-in editing, and table of contents refinements.

The Mobile web projects team worked on the link inspector for VisualEditor on tablets, and a switch between VisualEditor and wikitext on tablets. Both are in alpha.

During the last month, with the assistance of the Operations and Platform teams, the Wikipedia Zero team set up the upcoming Partners Portal and continued work on reducing image size for the mobile web. Additionally, the team added Wikipedia Zero detection to the Wikipedia for Firefox OS app, as well as contributory features support for users on partner networks supporting zero-rated secure connections. With the assistance of the Apps team, new features were added to the forthcoming reboots of the Android and iOS apps; proof of concept for full-text search was started on iOS.

Smart, the largest mobile operator in the Philippines, is giving access to Wikipedia free of data charges through the end of April. We arranged a meeting with local community members and Smart to explore ways to collaborate in support of education. The partnerships team started to review the 27 existing Wikipedia Zero partners, to update the implementation, identify opportunities for collaboration in corporate social responsibility (CSR) initiatives and get feedback on the program. The account reviews will continue for the next few months. 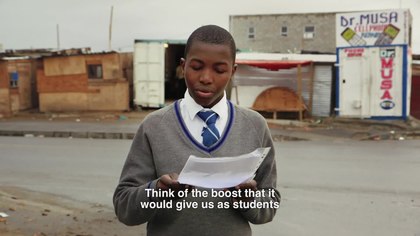 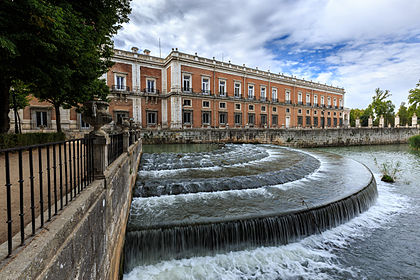 The Royal Palace of Aranjuez: One of the winning photos in Wiki Loves Monuments 2013 in Spain

The month of March (and we expect the next few months) involved the incorporation of the former “Program Evaluation and Design” team into the former “Grantmaking Learning & Evaluation” team. We are now acting as one cohesive team, with clear workstream areas carved out — the largest of which is program evaluation. We are thrilled about the opportunity to coordinate more effectively on the integration of program and organizational effectiveness.

We spent a lot of time this past month prepping for the months ahead: annual planning for FY14-15, Wikimedia Conference 2014, Wikimania submissions, interviews for the new community coordinator, and strategy sessions with the new team. We are looking forward to the return on these planning investments over the months ahead!

In addition to the work collaborating within grantmaking around our organizational shift and annual planning (see above), in the month of March the program evaluation team has also been: 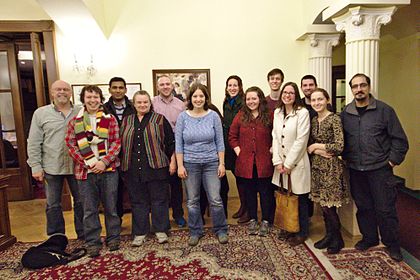 Education program leaders at the EduWiki conference in Belgrade 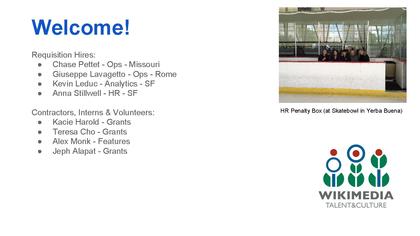 Much of March has been spent supporting the ED and VPE searches, and the first draft of the department annual plans and staffing to feed into the Wikimedia Foundation’s FDC proposalsubmission. Routine work around benefits administration, immigration, continues. Onward.

For LCA, March was focused on a variety of ongoing projects, including litigation and community consultations.

March saw the announcement revealing the Foundation’s new Chief Communications Officer, Katherine Maher. Katherine will take on her new role in mid April. The Communications team tracked some complex issues through the month, including efforts by a Greek politician to sue a Greek Wikipedian and fundraising issues in Finland, and also worked on change management issues with Foundation leadership. And we supported the Fundraising team in the preparation of the publication of the draft 2014/15 annual plan in form of the WMF FDC proposal, including an appendix titled “Ongoing work areas of the Wikimedia Foundation” which for the first time gives a comprehensive overview of recurring, long-term work that staff across the organization carry out in support of Wikimedia projects (see also general “Highlights” section). We also pitched out the unveiling of the new typography, leading to two stories in Fast Company magazine.

A statement on Wikimedia Foundation’s fundraising delivered to the National Police Board of Finland (03 March, 2014)

Wikimedia and Bitcoin
Jimmy Wales at the forefront of the Bitcoin discussion – hints that the Foundation might start to accept the digital currency, but assures a consultation with the Board of Trustees before any final decision is made. (04 March, 2014).
Mashable [1]
The Telegraph [2]

Wikipedia on Crimea
An edit war has ensued on Wikipedia after disputes between Ukraine and Russia have put the Crimean region’s status as an autonomous republic of Ukraine up for debate – triggering constant edits and a spirited debate (19 March, 2014).
ABC News [3]
HNGN [4]
Talk Radio News Service [5]
The Voice of Russia [6]

Blog.wikimedia.org published 26 posts in March 2014. Two posts were multilingual, with translations in Spanish.

For Rexford Nkansah, Wikipedia represents the future of education for his country (March 19, 2014).

Hovercards now available as a Beta Feature on all Wikimedia wikis (March 26, 2014).

The Wikipedia Teahouse had its second birthday – still going strong, now run by the community. We worked with Grantmaking to create a prototype for the new Wikipedia Library pilot on Arabic Wikipedia, and began a sprint to make the IdeaLab more flexible and reusable for developing projects. Brena Monteiro finished her FOSS Outreach Program for Women project with mentors Quim and Heather.

For lots of detailed coverage and news summaries, see the community-edited newsletter “Wikipedia Signpost” for March 2014:

Visitors and guests to the WMF office in March 2014: