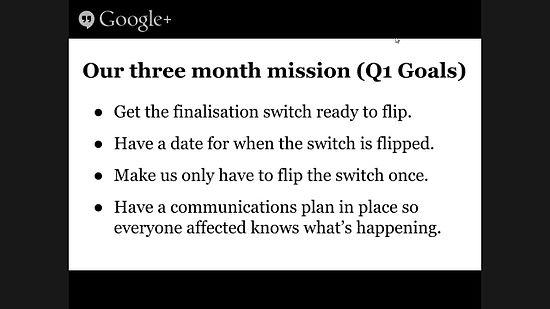 Video of the monthly Wikimedia Foundation metrics and activities meeting covering the month of June (July 3, 2014)

469 million (+0.7% compared with April; -10.2% compared with the previous year)
(comScore data for all Wikimedia Foundation projects, not including mobile devices; comScore will release June data later in July)

20.217 billion (-0.2% compared with May; -4.4% compared with the previous year)
(Server log data, all Wikimedia Foundation content projects including mobile access, but excluding Wikidata and the Wikipedia main portal page.)

(Financial information is only available through May 2014 at the time of this report.)

All financial information presented is for the Month-To-Date and Year-To-Date May 31, 2014. 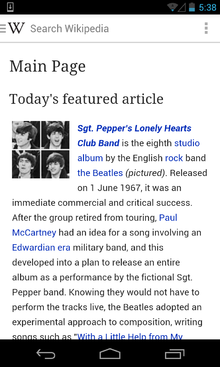 Main Page of the English Wikipedia on the new Android app.

The new Android Wikipedia app was released in June and is now available in the Google Play store. Core features of the app include the ability to save pages for offline reading, a record of your reading history, and the ability to edit either as a logged in user or anonymously. The app is the first mobile platform that allows anonymous editing.

Also, since June 17, users on tablets are now redirected to the new tablet-optimized mobile site; they were previously being sent to the desktop version of all Wikimedia projects. Early data suggests that this change had a positive impact on new user signup and new editor activation numbers.

Media viewer released on all wikis

In June, the multimedia team released Media Viewer v0.2 on all Wikimedia wikis, with over 20 million image views per day on those sites that are tracked. Global feedback was generally positive and helped surface a range of issues, many of which were addressed quickly. Based on this feedback, a number of new features were developed by the team: view images in full resolution, view images in different sizes, show more image information, edit image file pages, as well as easy disable tools for anonymous users and editors.

The results of the first impact assessment for Annual Plan Grants (FDC grants) to Wikimedia organiations were published. Based on the reports of the 9 organizations funded in Round 1 of 2012-2013, the report found that organizations had strength in content-related projects, which benefitted from full time staff and consistent partnership:

Term of Use amended with transparency requirements for paid editing

The Wikimedia Foundation published a new amendment to the Terms of Use to address disclosure of paid editing.

A detailed report of the Tech Department’s activities for June 2014 can be found at:

Major news in June include:

Presentation slides about VisualEditor from the Editing team‘s quarterly review

In June, the VisualEditor team continued to improve this visual tool to edit wiki pages. They provided a way to see the context of links and other items when you edit to make this easier, worked on the performance and stability of the editor so that users could more swiftly and reliably make changes to articles, and made some improvements to features focused on increasing their simplicity and understandability. The editor now shows with a highlight where dragging-and-dropping content will put it, and works for any content, not just for images. The citation and reference tools had some minor adjustments to guide the user on how they operate, based on feedback and user testing. A lot of fixes to issues with windows opening and closing, and especially the link editing tool, were made, alongside the save dialog, categories, the language editing tool, table styling, template display and highlights on selected items. The mobile version of VisualEditor, currently available for alpha testers, moved towards release, fixing a number of bugs and improving performance. Work to support languages made some significant gains, and work to support Internet Explorer continued. The new visual interface for writing TemplateData (structured template documentation) was enabled on the Catalan and Hebrew Wikipedias.

Work also continued on Parsoid, the parsing system that works behind the scenes of VisualEditor to convert wikitext to annotated HTML, and vice versa. The team continued with ongoing bug fixes and bi-weekly deployments; they notably worked on improving the parsing support for some table-handling edge cases, handling nowiki tags, and making the parsing faster. They also began work on supporting language converter markup.

The Parsoid team added CSS styling to the HTML code to bring Parsoid’s HTML closer to what is produced by the PHP parser (used in MediaWiki). They continued to tweak the CSS based on rendering differences they found, and started work on generating visual diffs between screenshots of content rendered with the two methods. This initial proof-of-concept will serve as the basis of larger scale automated testing and identification of rendering diffs. Last, the LintTrap project (for the detection of broken wikitext) saw good progress and a demo application was made available. 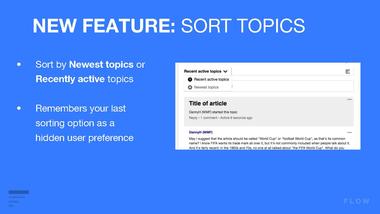 Presentation slides on Flow from the metrics meeting for June

In June, the Flow team finished an architectural rewrite for the interface, to make it easier to update it in the future. The new feature in the latest release is the ability to sort topics on a Flow board. There are now two options for the order that topics appear on the board: you can see the most recently created threads at the top (the default), or the most recently updated threads. This new sorting option makes it easier to find the active conversations on the board.

We’ve also made a few changes to make Flow discussions easier to read, including a font size now consistent with other pages, dropdown menus now easier to read, and the use of the new button style and the WikiGlyphs webfont.

The Growth team completed analysis of its first round of A/B testing of signup invitations for anonymous editors on English, French, German, and Italian Wikipedias. Based on these results, the team prepared a second version to be A/B tested. Additionally, the team released a major refactor of the GuidedTour extension, as well as design enhancements like animations, a new way of drawing guider elements, updated button styles, and more. The team also launched GuidedTours on three new Wikipedias: Arabic, Norwegian, and Bengali.

The Mobile Apps team released the new Android Wikipedia app and it is now available to be downloaded through the Google Play store on Android devices. Core features of the app include the ability to save pages for offline reading, a record of your browsing history, and the ability to edit either as a logged in user or anonymously. The app is the first mobile platform that allows anonymous editing. The app also supports Wikipedia Zero for participating mobile carriers. Additional work done this month includes the start of implementing night mode for the Android app (by popular demand), creating an onboarding experience which is to be refined and deployed in July, and numerous improvements to the edit workflow. 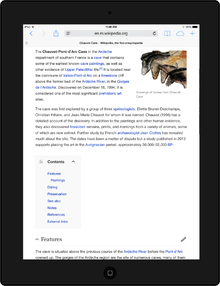 The Mobile web team finished work on styling the mobile site to provide a better experience for tablet users. As of June 17, users on tablets are now redirected to the new tablet-optimized mobile; they were previously being sent to the desktop version of all Wikimedia projects. Early data suggests that this change had a positive impact on new user signup and new editor activation numbers. The team also continued work on VisualEditor features (the linking and citation dialogs) in preparation for releasing the option to edit via VisualEditor to tablet users in the next three months.

During the last month, the Wikipedia Zero team activated the new code for Wikipedia Zero, by replacing replaces one monolithic piece of software by multiple smaller tools. The JsonConfig extension, which allows a wiki-driven configuration system with data validation, received significant enhancements to make it more general for other use cases.

Wikipedia Zero was launched with Airtel in Bangladesh; this is the third Zero partner in Bangladesh, and the 34th launched partner overall. The team participated in the Wiki Indaba conference, the first event of its kind to be held in Africa. The event, organized by Wikimedia South Africa, brought together community members from Tunisia, Egypt, Ghana, Kenya, Namibia, Nigeria, Ethiopia, Malawi and South Africa. The attendees shared experiences and challenges to work in the region and formulated strategies to support and strengthen the movement’s efforts across the continent. The team also met with local operators in South Africa, and operators and handset manufacturers in India. 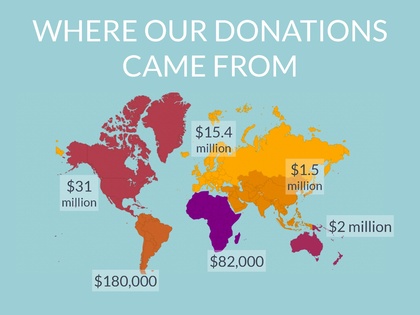 For Next Fiscal Year:

We closed out the fiscal year in June by solidifying the tools supporting the Grantmaking team (see tools section below). We are now sitting on the first year of reporting information from our new grantmaking systems (IEG, PEG, and APG) and are ready to collect and synthesize! We have done this for both the first round of IEG grantees and APG grantees, and we are in the process of reviewing the ~35 grant reports submitted through the Project & Event grants program to create a consolidated picture of the progress against our strategic goals via our movement partners funded through grantmaking.

Strategically, we are continuing to see two trends underscored:

1) Grantees are having a tough time measuring outcomes; continued standards, education, and tools for self-evaluation are needed for funded activities.
2) Global South continues to see increases in readership and all editor metrics (1+, 5+, 100+); we should continue to focus our efforts on these priority areas both financially but more importantly with supporting research (e.g., understanding editing motivations and populations).

Work this month was focused on conducting an executive retreat with our new Executive Director and team, and also supporting the entire organization in the process of our annual reviews. We have also completed hiring for our recruiting team, and onboarded both our Benefits and Wellness Coordinator and our Recruiting Coordinator.

The biggest Communications stories in June were about paid editing on Wikipedia. WMF announced an amendment to its Terms of Use in the middle of the month, generating significant media coverage about the relationship between Wikipedia and paid editing. This came one week after a pledge by leading US public relations to respect Wikimedia’s terms of use generated numerous press hits. The EU’s right to be forgotten ruling remains in the news, with speculation about what it means for Wikipedia. Wikipedia Zero launched in Rwanda, generating local press. The Product team launched its new Android App, generating coverage in the tech press. Throughout the month, the Communications team worked to finalize its Q1 goals, supported the rollout of the Terms of Use and the Android App, and on preparations for Wikimania.

The communications team supported the launch of the Android app in June.

Right to be Forgotten – Jimmy Wales

Wikimedia Bangladesh completes its local registration after a five-year journey (June 27, 2014).
New and improved Wikipedia app for Android (June 25, 2014).
Wikipedian Ram Joshi has contributed over 6,000 edits to Wikipedia only using his feature phone from his remote village in Nepal (June 24, 2014).
Change to the terms of use (June 16, 2014).
Blog post from Board of Trustee member Bishakha Datta (June 13, 2014).

We helped the Administration team to make some decisions for the 6th floor reconstruction. Started talking with various teams about swag for Wikimania and the Allhands meeting. We also worked on adding page creation to a new Meta gadget with the IEG team.