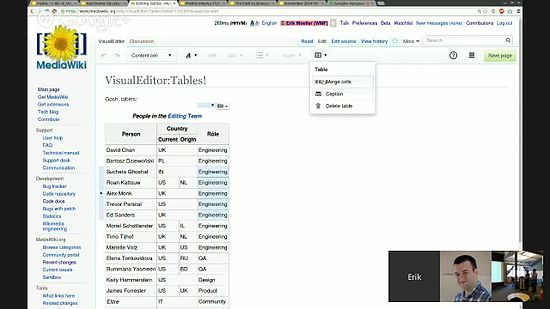 Video of the monthly Wikimedia Foundation metrics and activities meeting covering the month of October (November 6, 2014)

New “Nearby” function in Wikipedia apps shows articles around you

Screenshot of “Nearby” in the Android app

The mobile Wikipedia apps for Android and iOS added a “Nearby” feature in October. It retrieves a list of Wikipedia articles near the user’s current location and shows their relative distance. A compass arrow points to the direction for each location and updates as one moves. A single tap on an entry opens the article for reading, and a long press opens a map view.

All Wikimedia logos now under a free license

The Wikimedia Foundation’s legal team announced that as of October 24, all Wikimedia logos are freely licensed on Wikimedia Commons under the Creative Commons Attribution-ShareAlike 3.0 license. In the past, many of the Wikimedia logos on Commons did not carry the CC BY-SA 3.0 license for historic reasons. Beginning in 2013, the legal team conducted an extensive review of their copyright status and worked with many of the logo designers to get a complete history, ending in the re-licensing of the logos.

A portrait on the Wikimedia blog decribed how Hans Oleander, a tour guide on expeditions in Antarctica, uses an offline version of Wikipedia with the Kiwix software. It enables him to quickly research facts in an area with no Internet access, to prepare lectures and answer a wide range of questions from tourists about Antarctica.

A week-long bootcamp in Berlin joined members of Wikimedia Germany’s Wikidata team and the Foundation’s Multimedia team with community volunteers. They investigated how to structure data on Wikimedia Commons, reusing the same technology as the one developed for Wikidata. Today, information about media files on Wikimedia sites is stored in unstructured formats that cause several issues: for example, file information is hard to search, some of it is only available in English, and it is difficult to edit or re-use files to comply with their license terms. Separately, a file metadata cleanup has been launched, which will help migrate the existing metadata of the more than 24 million files on Commons to structured data. 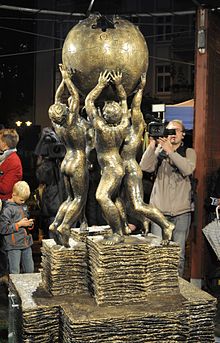 On October 22, a monument honoring Wikipedia editors from all over the world was unveiled in the town of Słubice, Poland. The monument was the idea of Dr. Krzysztof Wojciechowski, the head of Collegium Polonicum, an academic institution located in Słubice. It was created by Mihran Hakobyan, an Armenian artist, and depicts two men and two women holding the Wikipedia puzzle globe. They stand on sheets of paper which, according to Dr. Wojciechowski, represent the culture of print from which we all derive. Wikipedia articles about the monument already exist in over 30 languages.

On October 1, the Russian Civil Code saw several changes which are very significant for the promotion of free knowledge, in particular for Wikipedia and other Wikimedia projects. For examples, the new law directly recognizes free licenses and introduces freedom of panorama (allowing the publication of photos of modern building without having to ask for explicit permission, enabling the participation of Russia in Wiki Loves Monuments). Wikimedia Russia actively participated in the preparation of these changes.

On October 10, a group of Wikipedians from the Norwegian Wikimedia chapter met at the Nobel Peace Center in Oslo to follow the announcement of the Nobel Peace Prize and make updates to Wikipedia in real time as the winners — girl’s education activist Malala Yousafzai, of Pakistan, and childhood rights activist Kailash Satyarthi, of India — were made public. The event followed on earlier collaborations between the chapter and the Nobel Peace Center, which is visited by 220,000 people every year.

Wiki Loves Africa is a new annual contest where people across Africa contribute photographs, video, and audio to Wikimedia Commons, running for two months (October 1 to November 30). The 2014 contest was about documenting the diverse cuisine across the African continent.

Editorial note: The Wikimedia Foundation has recently changed its organization-wide reports from a monthly to a quarterly publication schedule. Instead of excerpts from the Foundation’s monthly reports, the Wikimedia Highlights now (starting from the October 2014 issue) summarize news about WMF activities from the Wikimedia blog, alongside other movement news.