• How we made editing Wikipedia twice as fast
• Top 10 most edited pages on English Wikipedia in 2014
• Wiki Loves Earth 2014 winners announced
• Wikipedia’s first-ever annual video
• A culture of kindness
• Global impact: The Wikipedia Library and Persian Wikipedia
• Tapping into the knowledge of indigenous communities

HHVM provides this “flame graph“. It visualizes which parts of the code consume most CPU time, making it easier to further improve MediaWiki’s performance in the future.

How we made editing Wikipedia twice as fast

Over the last six months, the Wikimedia Foundation deployed a new technology that speeds up MediaWiki, Wikipedia’s underlying PHP-based code. HipHop Virtual Machine, or HHVM, reduces the median page-saving time for editors from about 7.5 seconds to 2.5 seconds, and the mean page-saving time from about 6 to 3 seconds. Here’s our technical report on how it was developed. 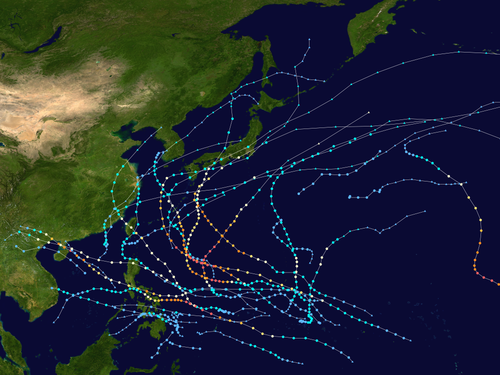 The Pacific typhoon season was one of the most edited articles on the English Wikipedia in 2014. By Keith Edkins. Data from NASA/Joint Typhoon Warning Center. Public domain.

Top 10 most edited pages on English Wikipedia in 2014

In 2014, volunteer editors created more than three million pages and made more than 100 million article edits on Wikipedias across all languages. Here are some of the top 10 most edited pages on English-language Wikipedia in 2014. Topics include Deaths in 2014, the Malaysia Airline disasters and the Israel-Gaza Conflict.

Wiki Loves Earth, a photo contest of natural monuments, became international for the first time in 2014 and was held in 16 countries. After a careful evaluation, the international jury announced the winners. Prizes were awarded to photos ranging from Carpathian National Park (Ukraine) to God‘s Finger Rock (Brazil) and Mukri Nature Park (Estonia). For this contest, over 70,000 pictures were submitted by more than 3,000 participants from 15 countries. Take a look at some of the winning images here.

Wikipedia: #Edit2014 tells the story of what you read and edited in 2014. You can also view this video on YouTube. Video by Victor Grigas, CC BY-SA 3.0.

The Wikimedia Foundation’s first-ever year-in-review video chronicles the celebration, pain, fear, resilience, and discovery that came to characterize 2014. While watching the video, you embark on a journey through the world and Wikipedia, revisiting what you read and edited this year. From the FIFA World Cup to the Indian general elections, and the Ice Bucket Challenge to Ebola in West Africa, we follow threads of discovery through Wikipedia in various languages, finding opportunities to contribute along the way. Watch the video, which takes you from Sochi to outer space in less than three minutes.

A culture of kindness

Can we improve Wikipedia by being nicer to each other? In this personal view, Fabrice Florin shares ideas for growing a “culture of kindness” on Wikipedia. Over the past few years, he collected hundreds of community suggestions for improving Wikipedia — inviting contributors to write down their idea on a notepad, and get their photo taken. Some of the most frequent responses invite contributors to be more civil: “Be nice,” “Be kind,” “Be friendly.” Participants often observe that participating on Wikipedia can be a frustrating experience for new and experienced users alike, because many of our members lack civility. Ideas for building more trust in our communities include: help newbies, train editors, reward kindness, build more social tools, use friendlier channels and give everyone a voice. Read more and watch the video here.

Last fall, the Wikipedia Library announced another round of digital resource access partnerships. These partnerships allow experienced editors from all around the globe to access research materials behind a paywall, to advance our goal of creating and sharing a summary of all human knowledge. One of the longest lasting and most useful donation partnerships has been with journal archive JSTOR. It saw significant participation from non-English editors, speaking languages like German, Spanish, French — and Persian, which came as a pleasant surprise. To learn more, we asked one of our most active Persian editors with a JSTOR account, User:4nn1l2, why he finds the Wikipedia Library important to his work.

Tapping into the knowledge of indigenous communities

Wikipedia has made huge progress towards its mission to provide free access to the sum of human knowledge. But indigenous knowledge is largely excluded because the majority of it is not available in writing. To address this issue, community volunteer Peter Gallert designed a workshop for the 2014 Participatory Design conference in Namibia, to produce and document examples of relevant oral citations. Last October, a small group of Wikipedians traveled to the Namibian village of Otjinene to interview elders about traditions, culture and development of the local Herero community. The aim of the interview was to directly convert narratives into Wikipedia content with oral citations.

This selection includes the top 5 stories published on the Wikimedia Blog in December 2014 (based on total page views up to Jan. 30, 2015) — as well as other noteworthy stories contributed by community members that month. 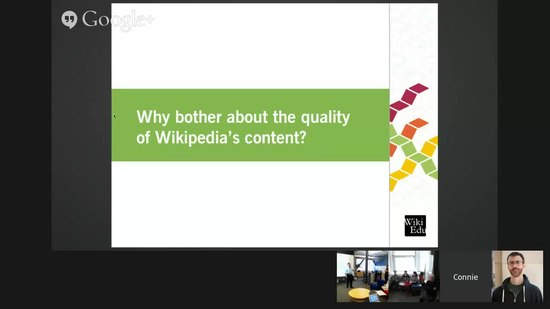 Video of the monthly Wikimedia Foundation metrics and activities meeting on January 15, 2015, focusing on the topic of quality (slides)