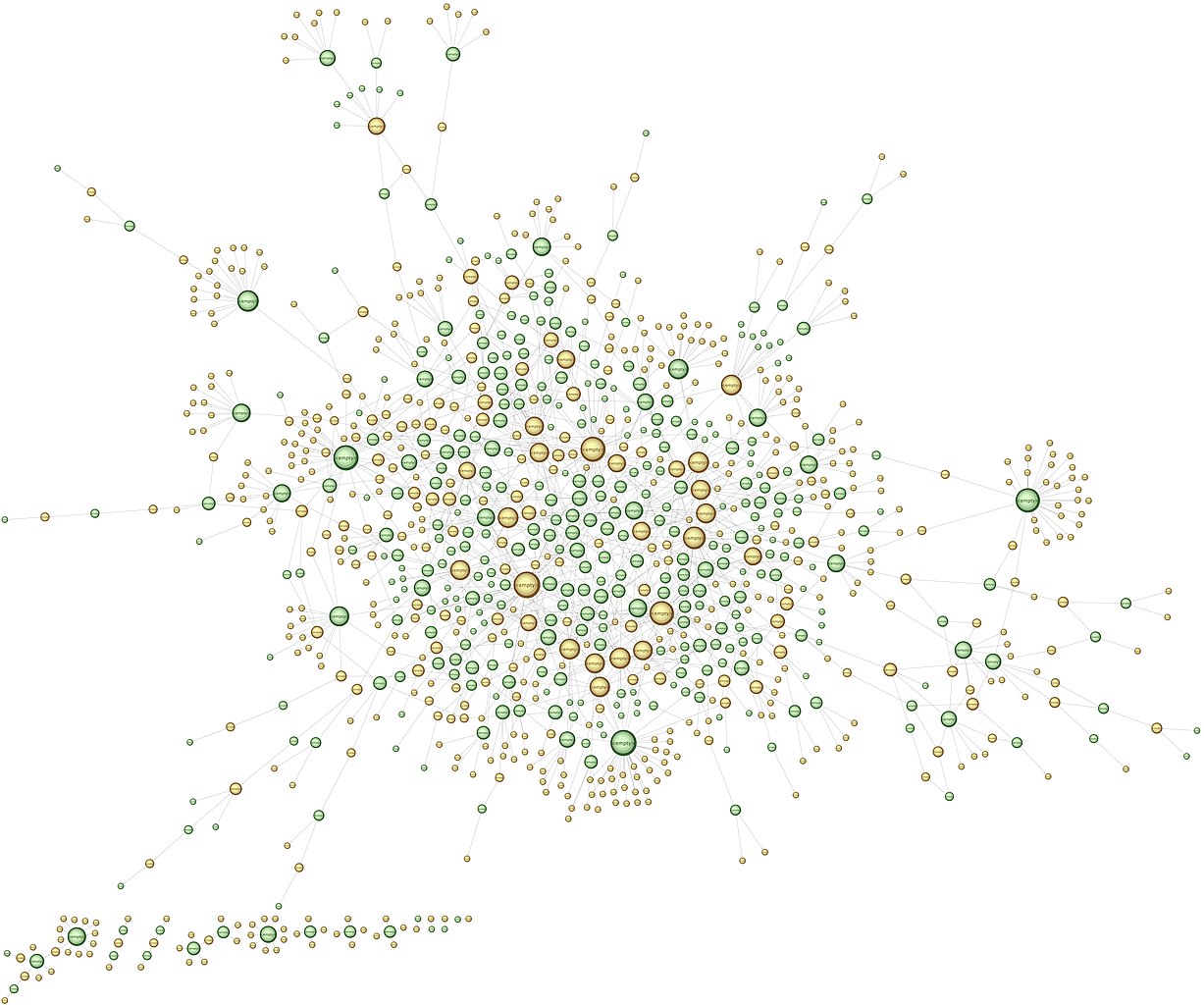 Hundreds of ‘black hat’ accounts on English Wikipedia were found to be connected during the investigation. The usernames (green) and IP addresses (yellow) have been removed from the image. Graph by James Alexander, freely licensed under CC-by-SA 3.0.
After weeks of investigation, volunteer editors on the English Wikipedia announced today that they blocked 381 user accounts for “black hat” editing.[1] The accounts were engaged in undisclosed paid advocacy—the practice of accepting or charging money to promote external interests on Wikipedia without revealing their affiliation, in violation of Wikimedia’s Terms of Use. The editors issued these blocks as part of their commitment to ensuring Wikipedia is an accurate, reliable, and neutral knowledge resource for everyone.
The community of volunteers who maintain and edit Wikipedia vigilantly defend the Wikimedia sites to ensure that content meets high editorial standards. Every day, volunteer editors make thousands of edits to Wikipedia: they add reliable sources, introduce new topics, expand articles, add images, cover breaking news, fix inaccuracies, and resolve conflicts of interest. Wikipedia is the encyclopedia anyone can edit, and its open model makes it a rich and reliable resource for the world.
Neutrality is key to ensuring Wikipedia’s quality. Although it does not happen often, undisclosed paid advocacy editing may represent a serious conflict of interest and could compromise the quality of content on Wikipedia. The practice is in conflict with a number of English Wikipedia’s policies, including neutrality and conflict of interest, and is a violation of the Wikimedia Foundation’s Terms of Use.
With this action, volunteer editors have taken a strong stand against undisclosed paid advocacy. In addition to blocking the 381 “sockpuppet” accounts—a term that refers to multiple accounts used in misleading or deceptive ways—the editors deleted 210 articles created by these accounts. Most of these articles, which were related to businesses, business people, or artists, were generally promotional in nature, and often included biased or skewed information, unattributed material, and potential copyright violations. The edits made by the sockpuppets are similar enough that the community believes they were perpetrated by one coordinated group.
Community opposition to undisclosed paid advocacy editing on English Wikipedia has a long history, reaching back to at least 2004 when the first conflict of interest guidelines were introduced. Since then, the English Wikipedia community has been vocal about its opposition to this practice. In October 2013, Wikipedia volunteers blocked hundreds of accounts related to the consulting firm Wiki-PR. The Wikimedia Foundation responded with a formal statement, which described undisclosed paid advocacy as “violating the core principles that have made Wikipedia so valuable for so many people,” and sent a cease and desist letter. The Foundation later amended its Terms of Use to clarify and strengthen its ban on the practice.
Not all paid editing is a violation of Wikipedia policies. Many museum and university employees from around the world edit by disclosing their official affiliations, and several prominent public relations firms have signed an agreement to abide by Wikipedia’s paid editing guidelines. Editing Wikipedia is completely free, and only requires compliance with the project’s editorial guidelines. If someone does have a conflict of interest or is uncomfortable editing the site directly, there are several other options to bring the subject to a volunteer’s attention.
Readers trust Wikipedia to offer accurate, neutral content, and undisclosed paid advocacy editing violates that trust. Sadly, it also deceives the subjects of articles, who may simply be unaware that they are in violation of the spirit and policies of Wikipedia. No one should ever have to pay to create or maintain a Wikipedia article. Wikimedia volunteers are vigilant, and articles created by paid advocates will be identified in due time. The Wikimedia Foundation stands with the Wikipedia community in their efforts to make reliable, accurate knowledge available for everyone.
More information about this case is available in the community announcement, and editor community discussion is ongoing.
Ed Erhart, Editorial Associate
Juliet Barbara, Senior Communications Manager
Wikimedia Foundation

[1] Wikipedia editors are referring to this case as “Orangemoody” after the first sockpuppet identified during the investigation.

This post has been updated to clarify that blackhat editing involves both accepting and charging money to promote external interests, as well as clarify our position that no one should ever have to pay to create or maintain a Wikipedia article.