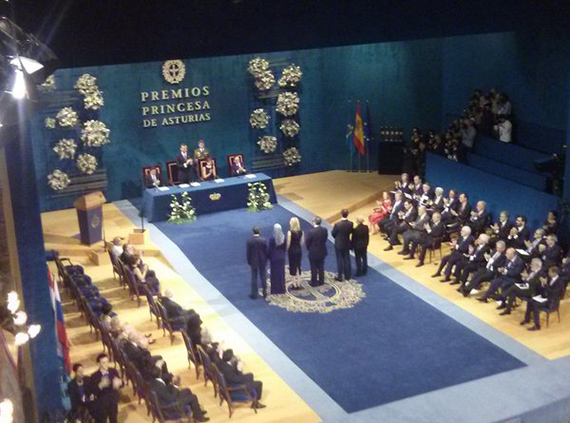 Wikipedia’s representatives – Jimmy Wales, Lila Tretikov, Patricio Lorente, Lourdes Cardenal, Ravan Jaafar Altaie, and Jeevan Jose (see below for more information) – receive the Princess of Asturias Award on Friday in Spain. Photo courtesy of Wikimedia España.
On Friday, October 23, Wikipedia was formally presented with the highly esteemed Princess of Asturias Award for International Cooperation, honoring the Wikimedia movement vision of allowing everyone, everywhere to freely share in the sum of all knowledge.
Established in 1980, the Spanish Princess of Asturias Awards annually recognize eight individuals and organizations from around the world for their scientific, cultural and social achievements in the arts, communication and humanities, social sciences, literature, sports, technical and scientific research, concord, and international cooperation.
The Princess of Asturias Foundation’s award jury chose  Wikipedia as an “important example of international, democratic, open and participatory cooperation” and took note of the thousands of volunteers who “selflessly” contribute to the Wikimedia projects. They compared Wikipedia to France’s famous Encyclopédie, saying that Wikipedia “has managed to make universal knowledge available to everyone along similar lines to those achieved by the encyclopedic spirit of the 18th century.” Previous recipients of the international cooperation award include the World Health Organization and the Bill and Melinda Gates Foundation.
Wikipedia Founder Jimmy Wales accepted the award on behalf of Wikipedia at the Princess of Asturias Foundation ceremony in Oviedo, Spain, presided over by the King and Queen of Spain. Jimmy was joined by Lila Tretikov, Executive Director of the Wikimedia Foundation, Patricio Lorente, Chair of the Board of Trustees of the Wikimedia Foundation, and Wikimedians Ravan Jaafar Altaie of Iraq, Lourdes Cardenal of Spain, and Jeevan Jose of India.
“Cooperation is what Wikipedia is all about, and it is a tremendous honor to be recognized by the Princess of Asturias Awards,” said Jimmy Wales. “I hope this inspires more people to become involved in the mission to share in the sum of all knowledge with the world.”
Wikimedians are volunteer contributors to Wikipedia and its sister projects. Ravan, Lourdes, and Jeevan represent a joyful dedication to knowledge and the global character of the Wikimedia community. Ravan is a engineer from Erbil, Iraq, and a passionate contributor to the Arabic Wikipedia. Lourdes is a representative of the Spanish Wikipedia community, serving as Spanish Wikipedia’s longest-running active editor and administrator. Jeevan, who prefers “Jee,” is a naturalist from a small village in southern India, where he contributes stunning nature photography to Wikimedia Commons.
“We are honored to be recognized in the category of international cooperation, which is at the heart of our mission,” said Lila Tretikov. “On Wikipedia, knowledge knows no borders. An image of a butterfly one photographer takes in an Indian forest helps editors around the world write articles on the species in their language, so half a billion people from every corner of the globe will learn about a rare species. This award honors the people that make Wikipedia possible.”
As a recipient, Wikipedia received a Joan Miró sculpture as a symbol of the award, a diploma, an insignia, and a prize of 50,000 euros.
Katherine Maher
Chief Communications Officer
(TOP) Wikipedia Representatives:
Jimmy Wales – Founder of Wikipedia
Lila Tretikov – Executive Director of the Wikimedia Foundation
Patricio Lorente – Chair of the Wikimedia Foundation Board of Trustees
Ravan Jaafar Altaie – Wikimedian
Lourdes Cardenal – Wikimedian
Jeevan Jose – Wikimedian