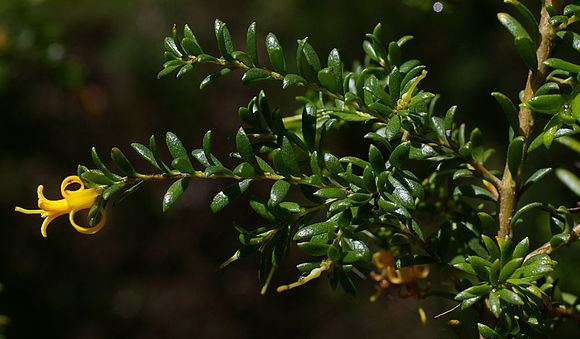 The English Wikipedia’s five millionth article was reached this month, covering a rare Australian shrub. Photo by Russell Cumming, freely licensed under CC BY-SA 2.0.
The English Wikipedia this month became the first language edition of Wikipedia to break the five-million article barrier, almost three and a half years after reaching four million. Persoonia terminalis, a rare shrub native to some parts of eastern Australia declared as such by botanists in 1991, took the accolade following a quite intense period of deliberation among volunteers.
With the publication of an article about redox indictors on November 13, the Ukrainian Wikipedia reached its 600,000th article. It remains the third-largest Slavic-language Wikipedia by quantity, only behind the Russian and Polish projects. “Congratulations, colleagues,” wrote Alex Kushnir of the article, created by chemist Олег.Н, who has been an editor of the project for almost four years.
It was also a good month, statistically, for the English Wikipedia—it surpassed 800 million total page edits, or just over 100 per minute since the site’s launch in 2001. The Arabic Wikipedia hit 20 million edits this month, as Polish Wikisource reached its first million.
Several projects hit new userbase milestones as well. Both the Azerbaijani and Bengali Wikipedias surpassed 100,000 registered users, while Wikimedia’s Meta-Wiki—a tool for cross-project collaboration and for the discussion of the projects themselves—now has 10 million users registered on the site. It is by far the largest project outside of the English Wikipedia in terms of userbase.