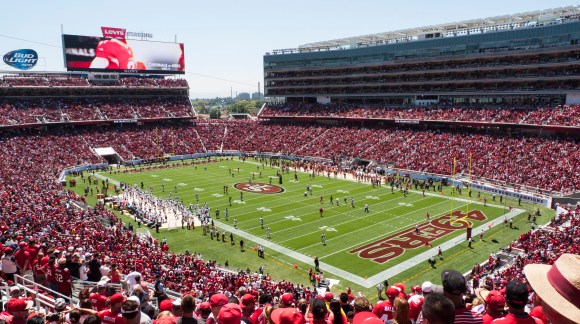 The Carolina Panthers and Denver Broncos will play Super Bowl 50 in Levi’s Stadium, seen here. Photo by Jim Bahn, freely licensed under CC BY 2.0.
As with many topics, the English-language Wikipedia’s coverage of the National Football League is extensive. Players from as large as Cam Newton or Peyton Manning to as little-known as Shamar Stephen or Gerald Christian all have articles, and their statistics are updated after every game by legions of volunteer editors.
The encyclopedia even has a dedicated project to keep track of these reams of articles: WikiProject National Football League (NFL). Of the 22,265 articles in its scope, 80 are of “featured” quality—that is, they have gone through and passed a rigorous peer-review process, making them “the best articles Wikipedia has to offer.”
We talked with several members of the project about their work on the site, starting with the pseudonymous Toa Nidhiki05, the author of the featured article on the Carolina Panthers. Toa has been a fan of the Panthers since he was eight or nine years old, starting with their run to the Super Bowl in 2003—where they lost to the New England Patriots, who were in the middle of a historically dominant period where they won three of four Super Bowls.
Toa had started editing Wikipedia with articles on Christian rock bands like MercyMe, but as a Panthers fan, he was eventually “naturally” drawn to the Wikipedia article on his favorite team. He was the first to try to get an NFL football franchise’s article to featured status, but he was able to draw from other sports for the examples he needed.
Since he finished in 2013, the team has markedly improved, having won 12 games in that year and 15 this season. Toa told us that in step with their improved performance, the article has received more attention and “vandalism”—problematic or joke edits that are usually reverted in a few minutes.
How does it feel to have your favorite team in the Super Bowl? Toa told us that “This whole season was a shock so I’m still kind of processing it.” He’ll be watching the game with his family, possibly with tacos on the side.
We also talked to WikiProject NFL members Bagumba, Rockchalk717, Dirtlawyer1, Giants2008, Crash Underride, and Dissident93. At least five of the six are Americans, but all of them take on different roles when editing Wikipedia: Crash Underride and Dissident do important but unheralded “wikignome” work, “keeping things consistent from one article to the next.” On the other side of the coin, Giants2008—as you might expect by the username—helped to construct an entire suite of New York Giants-related articles.
Bagumba and Dirtlawyer both avoid articles related to current events; Bagumba tries to avoid the “fanboy” elements inherent in San Diego Chargers articles and tries to do their gnoming in older topics, while Dirtlawyer similarly prefers to take advantage of the higher-quality references that appear months after events—and not just for the NFL. Dirtlawyer also takes on baseball, university sports (especially the Florida Gators), and Olympic swimming. Rockchalk contributes to Kansas City Chiefs articles, which are his favorite team, in his 15–20 hours a week of editing after work.
When it comes to the Super Bowl, most of these hardcore editors avoid the article because they are popular enough to get attention from mainstream editors. Giants, however, keeps up on several related articles, like the Super Bowl Most Valuable Player Award. “While it’s the kind of article that typically needs to be updated only once per year,” Giants2008 says, “it does face a lot of vandalism that has to be cleaned up. It requires a careful eye to ensure that the information remains accurate.”
These editor’s missions are not any different than the tens of thousands of Wikipedia editors that watch over the world’s largest encyclopedia 24 hours a day, 7 days a week. They watch over the sum of all knowledge, whether it’s American football, military history, medical content, or African breads, to ensure that it is preserved for generations to come.
Ed Erhart, Editorial Associate
Wikimedia Foundation