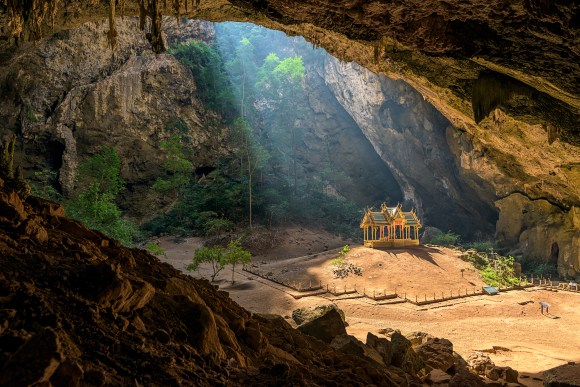 Janepop Atirattanachai jumped in a car with some friends and road-tripped over 500 km for this second-place photo. When the sky cleared at the perfect moment, Atirattanachai captured a ray of sunshine descending upon the royal pavilion in Thailand’s Khao Sam Roi Yot National Park. They also won ninth place, which can be found farther down in this post. 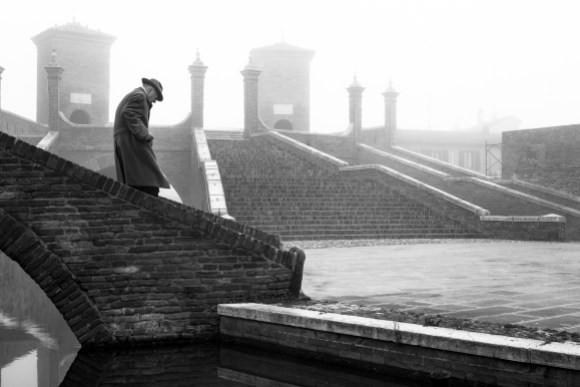 A timeless moment of an aging man walking through a historic area of Comacchio, Italy, on a foggy and bitterly cold winter day won fifteenth place. Francesco, the photographer and a native of Comacchio, was able to spot this man just early enough to get into position and wait for him to pass. 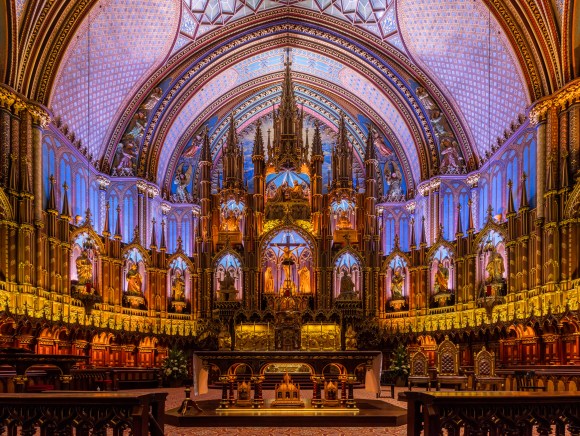 Long-time volunteer Wikimedian Diego Delso was in Montreal for Wikimania, the major annual conference of the Wikimedia movement, but snuck out of his hotel early one morning to capture the interior of the Notre-Dame Basilica—and eighth place in the contest. “I was actually the first visitor who got into the church that day,” he said. “The church was, for a minute, only for me.”

These are three of the fifteen winning photos from this year’s Wiki Loves Monuments, an annual photo competition recognized by the Guinness Book of World Records as the world’s largest photo competition. The contest, now in its sixth year, focuses on “monuments,” which the organizers broadly define as structures recognized by a local authority as being of particular value to cultural heritage.
This year’s rendition lived up to the billing: over 254,000 photos were submitted by just under 10,000 photographers. A plurality of the photos were of Ukrainian subjects, followed by Armenian.
The top images were winnowed down by the federated nature of the contest, as Wiki Loves Monuments is primarily organized on a national level by people just like you. Up to ten winners from each national competition, fifty-two in all, were advanced to an international jury, whose results are listed here. Five of those nations were entirely new to the contest, while seven were participating for the seventh time.
For more information on the winning photos and the 2017 competition, go to www.wikilovesmonuments.org. For the equipment and settings used to capture these shots, click on the images and scroll to the bottom of the page. The remaining winners follow below. 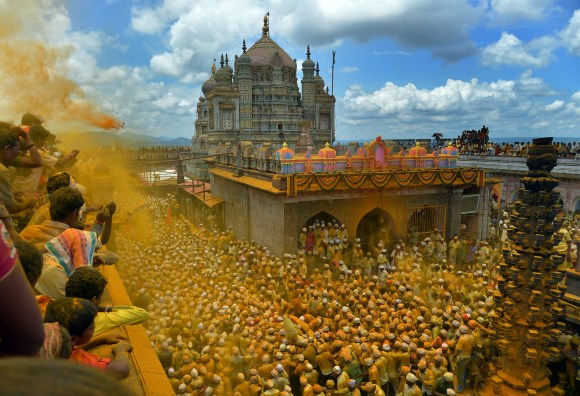 The Hindu deity Khandoba is worshipped with turmeric, bel fruit-leaves, onions and other vegetables. Here, at a revered temple in Pune, India, followers are showering one another with turmeric powder. This photo from PKharote won first place in the international competition. 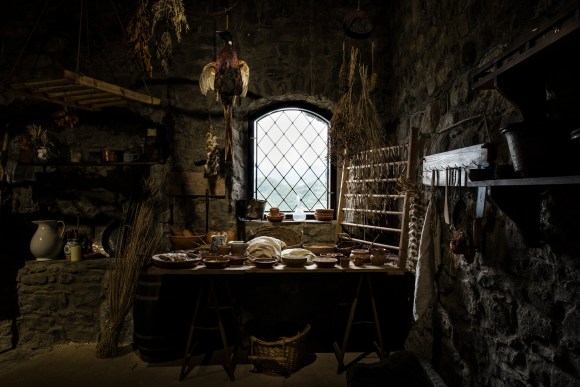 Simone Letari was unhappy with the lighting conditions available outside, so they ventured inside Verrucole Castle and discovered this vintage scene, which netted them sixth place. 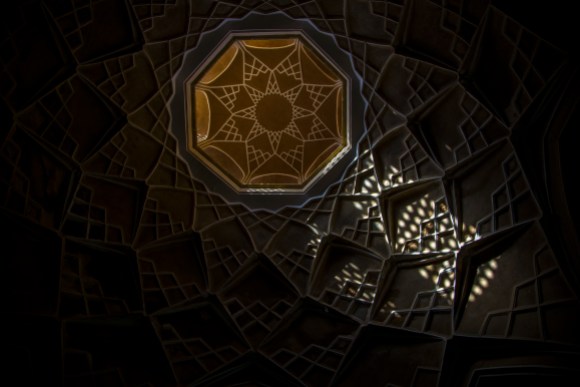 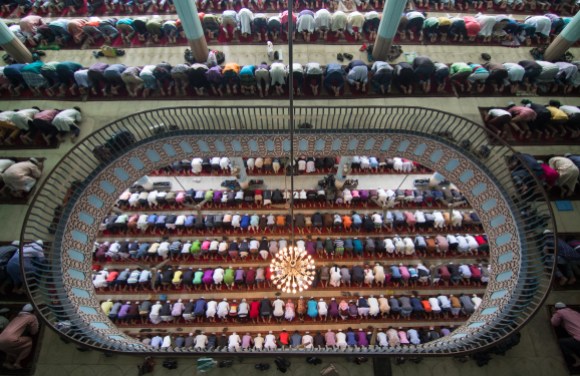 “Around 20,000 people were visiting [Bangladesh’s Baitul Mukarram National Mosque], decorated in beautiful teal and gold, for weekly [Friday] prayers,” says amateur photographer Azim Khan Ronnie. “Thousands of people come together [here] to pray over several floors of one of the biggest mosques in the world.”  This presented both opportunity and difficulty; Ronnie needed many attempts to find the right composition. That effort yielded Wiki Loves Monuments’ third-place photo. 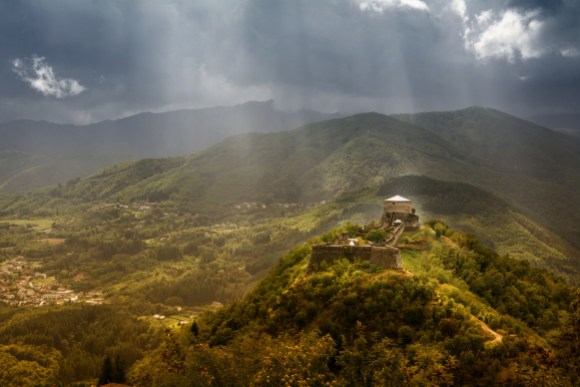 Unlike the other shot of Verrucole Castle to place in the international competition, Iris—the photographer behind this image—visited the area when the lighting outside was a bit better. The unexpectedly fantastic conditions, in fact, gave Iris lighting that shot out of the sky “like a razor through the heart,” as they put it—and straight into fifth place. 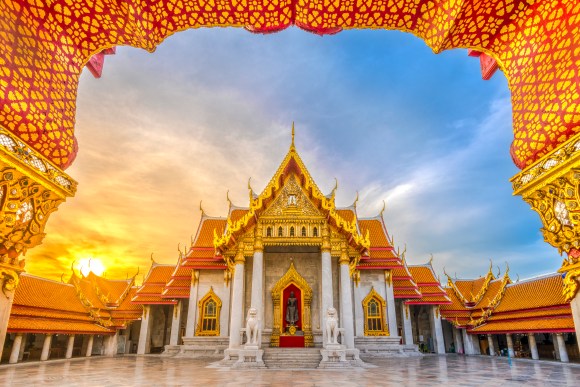 Janepop Atirattanachai was the only photographer with more than one image in the top fifteen. Unlike the other one, this did not require a road trip. Atirattanachai lives near Wat Benchamabophit, a Buddhist temple in Bangkok, Thailand, and photographs it often. They used that experience to snapshot the temple, framed by an arched gateway entrance and highlighted by a setting sun. 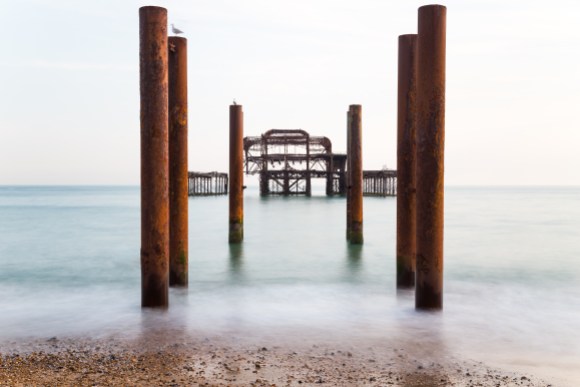 Brighton, in the United Kingdom, built the massive West Pier in the 1860s, during what its Wikipedia article calls “a boom in pleasure pier building.” It’s rather less pleasurable today, given that it has been derelict since 1975 and in a state of collapse since 2002. Still, that was no obstacle to Matthew Hoser, who used the rusting piers to frame the outermost ruins of what was a concert hall one century ago. “I think what makes my photo stand out is its simplicity,” Hoser said. “The long exposure … allowed me to smooth out the water and get a slightly smoky effect at the shore. This really allowed the strong lines of the derelict pier to stand out. I also like the contrasting textures of the pebbly sand and the soft water, and how a couple of gulls managed to stay still for the full eight seconds!” The result came in eleventh place. 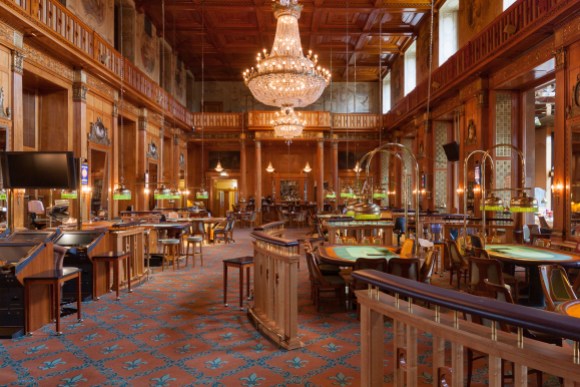 Roulette and poker tables feature in Martin Kraft‘s twelfth-place photo of the casino inside Wiesbaden, Germany’s Kurhaus. It was actually shot in 2013, right around the time Kraft became part of the Wikimedia movement. 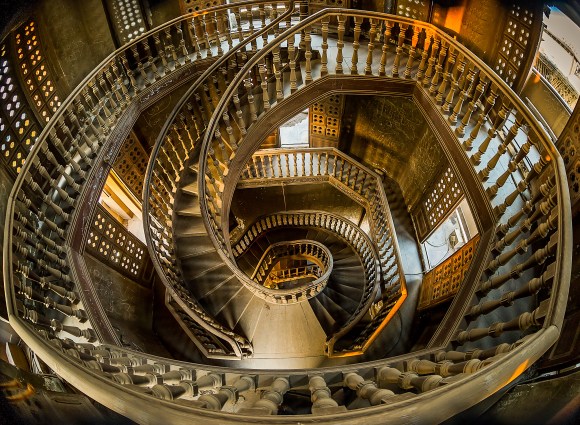 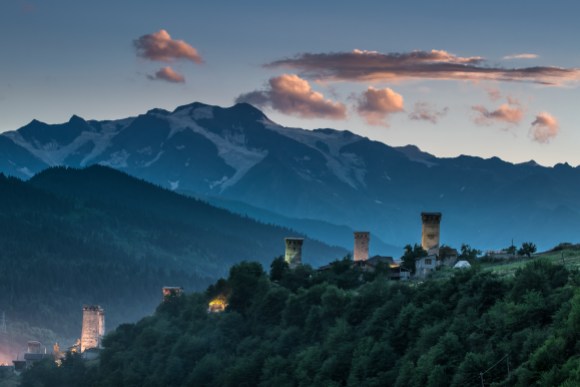 Dmytro Balkhovitin traveled to Mestia with a few friends awhile back and was forced to walk around for quite some time before finding this vantage point of its Svaneti towers, which won thirteenth place. “I like how the Svani towers are in harmony with the mountain peaks,” Balkhovitin said, “and [how the] illumination of the towers is combined with clouds at sunset.” 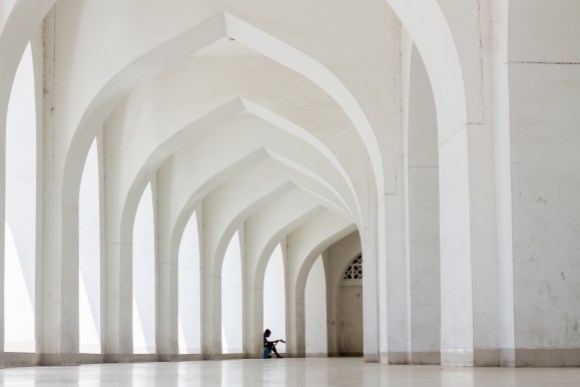 Seventh place is an exterior shot of Baitul Mukarram National Mosque from user Jubair1985, with a solitary person reading in between two of the pillars. The building was also featured in third place.

Thomas Adams’ process in taking this tenth-place image of the famed Sydney Opera House, seen from the perhaps equally famous Sydney Harbor Bridge, is a story unto itself. “I had been out all night on my own taking shots of the city when I thought I could get a shot of the Opera House,” Adams told us in comments that have been lightly edited for clarity.

Colourful themed light projections light the opera house’s sails for most of the night, but I already had images of those and wanted something different. I had to wait till 11:30pm for the coloured lights to be switched off, leaving just white light. The image was a 32 second exposure at f11 ISO 100 taken from the middle of the Harbour Bridge … The middle of the bridge was the toughest spot for a long exposure—every time a truck or train went past, the vibrations ruined the shot. Still, it was also the best spot to get a great angle of the house.

To make the situation more interesting, my camera battery was about to die and shot after shot was being ruined by the trucks and trains.  Then a passerby happened to walk past, a visitor to Sydney, and asked for his photo to be taken. I didn’t have the heart to refuse … and got a nice shot of him with the Opera House in the background.

So then it was back to trying to get the shot of the opera house with … a dying battery and getting a clear 30 seconds without any heavy vehicles crossing the bridge. I was wondering if I might have to come back another night to try again, but after a few more attempts I finally got it—with moments to spare before the battery finally died.

This post has been updated to add where readers can find the equipment and settings used in the winning photographs, and—on the advice of a surprising number of readers, both in the comments below and via email—corrected the eleventh place’s characterization of gulls as “pigeons,” with Matthew Hoser’s permission.