Video of the monthly Wikimedia Foundation metrics and activities meeting covering the month of July (August 1, 2013)

500 million (-4.25% compared with May; +6.37% compared with the previous year)
(comScore data for all Wikimedia Foundation projects; comScore will release July data later in August)

(Financial information is only available through June 2013 at the time of this report.)

All financial information presented is for the Month-To-Date and Year-To-Date June 30, 2013. 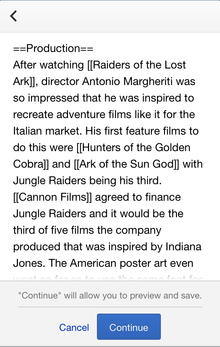 This month, the mobile web team released new navigation features for contributors to all Wikimedia mobile sites, including the existing upload and watchlist star features, as well as an edit button. This means that editing (in the form of section-level markup editing) is now enabled on all mobile Wikimedia sites for logged-in users. The users of our “beta” channel will soon see redesigned mobile notifications, as well as guides for first-time editors and uploaders. (More about the beta channel and how you can opt in.)

The first Wikipedia Zero launch in India gives 60 million mobile phone subscribers free-of-charge access to Wikipedia on their mobile phones. The promotional campaign around this launch, led by our partner Aircel, received broad coverage in print and was accompanied by Twitter and blogging events. Aircel customers now have free access to Wikipedia in English, as well as to the 19 Indic language Wikipedias.

In July we enabled the new editing interface on several Wikipedias as the default editor, first for logged-in editors and then for anonymous users as well. This resulted in a great deal of feedback, and the team responded with several hundred improvements to fix urgent issues. In addition, the team deployed user interface improvements, most notably to the references insertion dialog. Currently, users are making approximately 800 edits per hour using the VisualEditor on Wikimedia sites.

There are continuing discussions with different language communities about the positioning of the VisualEditor beta in the user interface and appropriate notices indicating its beta status. The Wikimedia Foundation is using the beta period to collect and analyze bug reports, feature enhancements, and data, to observe actual user behavior, and to improve the editing experience continuously. Our eventual objective is for VisualEditor to be the default editor for all Wikipedia users, capable of letting them edit the majority of content without needing to use the wikitext editor.

In July, we deployed a few last features and bug fixes for the Article Feedback Tool (AFT5) on the English and French Wikipedias. Matthias Mullie released the auto-archive feature, as well as this list of articles with feedback enabled on enwiki and on frwiki. At the request of the French Wikipedia community, Mullie also developed new feedback notifications to let users know when feedback is marked as useful for a page they watch (or for a comment they posted). The team plans to make the AFT5 tool available to other wiki projects interested in testing this tool, provided that no new development is required to support their needs, as outlined in the release plan.

Regarding Notifications, in July we released our final features on the English Wikipedia and mediawiki.org and meta.wikipedia.org. Benny Situ completed development of HTML Email notifications, as well as improved notifications, based on designs by Vibha Bamba. Fabrice Florin managed the release of these final features, and prepared this release plan to deploy Notifications on more Wikimedia projects, starting with French and Polish Wikipedias in August. Dario Taraborelli and Matthias Mullie updated our new metrics dashboards, while Aaron Halfaker completed his report on our A/B test of new user activity. To learn more, visit the project portal, read the FAQ page and join the discussion on the talk page.

The language team deployed Universal Language Selector (ULS) to most Wikimedia wikis to provide easier configuration options to readers and contributors. ULS provides a flexible way to configure and deliver language settings like interface language, fonts, and input methods (keyboard mappings). Also, ULS allows users to type text in different languages not directly supported by their keyboard, read content in a script for which fonts are not available locally, or customise the language in which menus are displayed. For more information, please see the FAQ.

Git migration complete: Now that we’ve helped move the pywikipediabot codebase from our old Subversion repository to our new Git repository, we have been able to switch svn.wikimedia.org to read-only mode. This ends a migration that began in 2012, motivated by a desire to enable more participation by volunteers, and to get improvements to users faster.

In July, we continued to expand our multimedia team: Mark Holmquist joined as front-end software developer, working with product manager Fabrice Florin and engineering director Rob Lanphier, as well as contractors Brian Wolff and Jan Gerber. We prepared a first multimedia plan for the coming year and discussed our goals with community members in two separate events: a multimedia roundtable and an IRC chat. Based on community feedback, we identified five main areas of activity 2013-2014: improving the viewing experience and upload pipeline in the first half of the year, then focusing on file curation, discovery and placement in articles for the second half of the year. Our overall goals for this year are to increase both the number of contributions and files used in Wikipedia articles. For now, we have started work on a new media viewer to display images in larger size when you click on a thumbnail, as well as display file information and a full-screen viewing option, right on the same page. We plan to have a first version of that feature next month, and will be testing it as part of a beta experiment on a few pilot sites. We will also be hosting more community planning discussions, such as this multimedia roundtable at Wikimania 2013. To participate in these discussions and keep up with our work, we invite you to join this new multimedia mailing list. Last but not least, we are also recruiting for two more positions for our team: a multimedia systems engineer and a senior software engineer. Please spread the word about this unique opportunity to create a richer multimedia experience for Wikipedia and MediaWiki sites!

July brought mobile editing to logged in users on all Wikimedia mobile sites, and saw the first Wikipedia Zero launch in India (see general “Highlights” section for both).

The Wikipedia Zero engineering team also completed our first automated testing work, started implementing the Wikipedia Zero software re-architecture, and fixed problems. During July, we planned for the upcoming year in Wikipedia Zero. Our engineers are first focusing on automating testing of our infrastructure and re-architecting our systems, and will then focus on making Wikipedia Zero easier to use for both the telecom carriers and for the people reading articles via Zero, so as to support the continued growth of the program.

The engineering department also worked on:

A detailed report of the Tech Department’s activities for July 2013 can be found at:

Some changes were made to the program pages to reflect changes to the operation of the participation support committee and the administration of this program: Participation:Support. 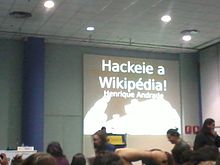 Presentation “Hackeie a Wikipédia!” at FISL14

HR has worked to wrap up the annual review cycle and implement annual merit and cost-of-living increases. With F&A, we co-hosted a Wikimania travel brown bag, bringing in guests from the Electronic Frontier Foundation (https://www.eff.org ) to talk about internet security while traveling to Asia. We also hosted a 1-day WMF leadership team retreat with all directors and managers to walk through guiding principles and organizational values, and how they are operationalized. In addition to supporting many new hires and creating a new Careers page on LinkedIn, we implemented PlanSource, a new benefits website which should roll out this month, added a FlexiPass for ease of use for those in the US using the pre-tax commuter benefit, and Benecards that allows payment like a credit card for those in the US using the pre-tax cafeteria plan. The 401k committee met again to improve existing funds, with new index fund selections now available.

The CTCO role was highlighted by Inc magazine online (“The Cat-Herding-est Job on the Planet“).

July was a busy month for the communications team, with three major announcements, preparations for Wikimania 2013, and an increase in communications support for launches in the month, including the beta roll out of VisualEditor. The team also prepared several presentations to be held at Wikimania 2013, which you are welcome to attend:

Aircel subscribers to be the first in India to have free access to Wikipedia on their mobile phones.

Wikimania 2013 is coming to Hong Kong this August 9–11. Wikimania has been, since 2005, the premier annual international gathering of the Wikimedia community, with participation from experts, academics, and Wikimedia enthusiasts.

Ana is currently the CEO for GIP (Public Interest Management), a consultancy firm based in Rio de Janeiro, Brazil, which works for foundations, non-profit organizations and businesses on social and environmental issues.

WMF launched its first major Wikipedia Zero partnership in India in July, partnering with Aircel to bring free access to Wikipedia to 60 million customers. The launch received immediate and positive response on Twitter, where Aircel announced an #IwikiWhen promotion. More than 150 media outlets in India published almost all positive-tone stories.

WMF’s Mobile Web team enabled editing on mobile Wikipedia in late July, resulting in a large number of positive-tone coverage in tech and media blogs. Almost all of the coverage was triggered by a single tweet from the mobile team, followed by a detailed blog post.

A research paper (“The most controversial topics in Wikipedia: A multilingual and geographical analysis”) released in May and widely circulated in July received considerable international coverage. The paper studied edit wars from 10 different language versions of Wikipedia, and aimed to understand “convergent and divergent social-spatial priorities, interests and preferences.” Global media mostly relayed the English top 10 list of the articles most susceptible to edit warring, with a neutral tone.

VisualEditor’s big July beta roll-out wasn’t driven by a major press push, but the blog post and overall increased visibility of the interface resulted in important coverage in mostly tech blogs. Media coverage has been mostly positive, generally highlighting the historic importance of the roll-out.

Is This the Most Interesting Opening Paragraph Wikipedia’s Ever Published? | Foreign Policy | July 11

With a Prized Base of 80,000 Global Volunteers, Wikipedia Looks Ahead Cautiously | Nonprofit Quarterly | July 2

For lots of detailed coverage and news summaries, see the community-edited newsletter “Wikipedia Signpost” for July 2013:

Visitors and guests to the WMF office in July 2013: